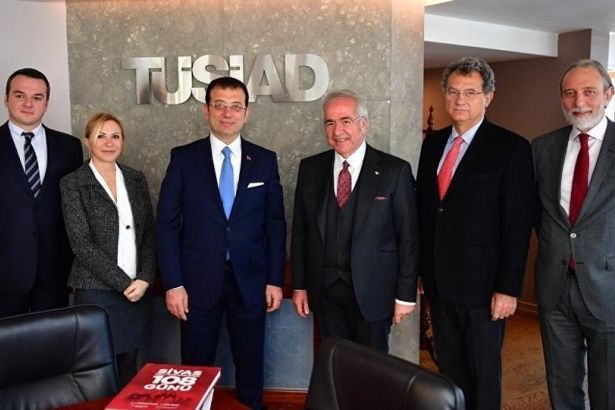 Welcomed by Erol Bilecik, the chair of TÜSİAD, İmamoğlu said, “I think TÜSİAD is one of the institutions that should not be excluded from any problems or solutions of İstanbul; moreover, it should be further included with a different model,” foreshadowing his municipal model if he wins the elections, in such a way that he will rule the city in accordance with the overt support of top capitalists.

İmamoğlu said that their visit was not only related with the upcoming local elections that will be held on March 31 but also a preliminary meeting for establishing a sustainable relationship with TÜSİAD in order to cooperate in the administration of İstanbul. He also added that they will speak about some other issues, including the economy of the city.

Stating that he was pleased to host İmamoğlu, the TÜSİAD chair, Bilecik, said: “İstanbul is one of the most precious of cities of Turkey and the world. From the view of Turkey, it seems that there is a very important connection with administrating İstanbul and governing Turkey.” Bilecik underlined that the metropolitan municipality office of İstanbul is a very precious responsibility.

Having been established in 1971, the so-called “secular” capitalist organization TÜSİAD has witnessed its most profitable years under the rule of Islamist AKP party over the last 17 years.

İmamoğlu is also known with his visit to Turkey’s President Recep Tayyip Erdoğan, who is also the chair of the ruling Justice and Development Party (AKP), in January 2019 when he launched his electoral campaign.

In his press statement after the meeting with Erdoğan, İmamoğlu underlined that the most important moment of the meeting was when he asked for Erdoğan’s vote and Erdoğan smiled at him and said: “It was a good conversation, a good interview where we heeded his experiences and views on İstanbul.”

İmamoğlu also shared his appreciation and witness for Erdoğan who had been elected İstanbul Metropolitan Mayor in 1994 and had “communicated successfully” with citizens. He said: “And I confirmed that. I am a witness of that period as a person who lived in İstanbul at that time.”

During his electoral campaign, İmamoğlu visited Kadir Topbaş, one of the ex-mayors of İstanbul, who had been forced by Erdoğan to step down from his post in September 2017 when Erdoğan had been reshuffling his party. İmamoğlu also paid a visit to Ali Koç, member of Koç Holding, one of the wealthiest family circles of Turkey, and the chair of Fenerbahçe, one of the biggest sports clubs in the country.

Running as the municipal candidate of CHP in İstanbul, İmamoğlu had started his political career in a right-wing party, ANAP (the Motherland Party). He became the mayor of İstanbul’s Beylikdüzü district in 2014 local elections.