Döhler workers protested the company for laying out the workers who were members of the Tekgıda-İş union despite the COVID regulations. 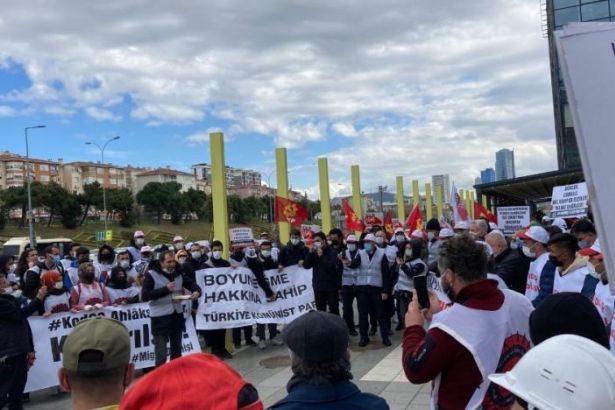 The Turkey branch of the Döhler group dismissed 10 workers unionized under Tekgıda-İş union in the Karaman factory last January. The workers were suspended by ‘Code-29’, which is used effectively against the unionized workers by Turkish companies. Although the pandemic regulations restrict the employers to dismiss any contracts, Döhler workers were suspended illicitly.

Today, many unions and political parties rallied in front of Döhler HQ located in İstanbul, Maltepe. İstanbul branch of the Communist Party of Turkey (TKP) also joined the joint demonstration with its members and shared solidarity message to the workers.

This code covers acts from sexual and physical assault, unethical behavior, and even terrorism. The companies are consistently using Code-29 against the unionized workers. This code lets employers suspend the workers without any notice, and any right to get compensation. Code-29 is also impossible to remove from official social security enrolment and becomes a tag for lifelong.