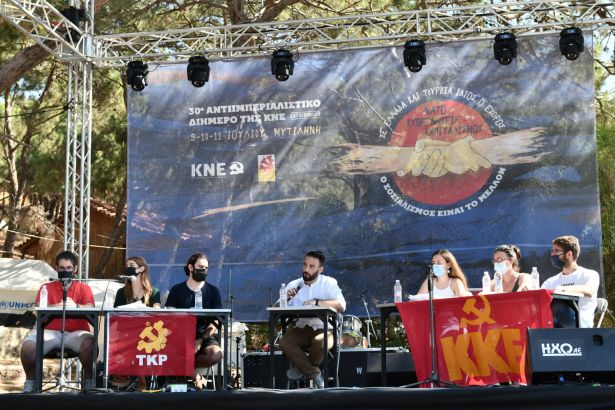 The Anti-Imperialist Camp of the Communist Youth of Greece (KNE), the youth organization of the Communist Party of Greece (KKE), has been organized since 1991. This year has marked the 30th of the traditional camp that is being jointly organized by Greek and Turkish communist youth in the Greek Aegean island of Mytilene.

A delegation from the Communist Party of Turkey, including the members of the Communist Youth of Turkey (TKG), has also attended the historical camp of the Greek communists. The youth organizations of Greece and Turkey have organized joint meetings at the camp in order to discuss the problems of the youth in Greece and Turkey on both sides of the Aegean Sea.

The Communst Youth of Turkey has attended the camp with a slogan showing the importance of the struggle for socialism in both countries: "We are fighting the same enemy in Turkey and Greece!"

In response to a question of soL news about the participation of TKG in the 30th Anti-Imperialist Camp in Mytilene, TKG members have said: "The anti-imperialist struggle both in Greece and Turkey has many common aspects," referring to the accession of Turkey and Greece to NATO with a resolution signed in 1952.

At the Anti-Imperialist Camp, Kemal Okuyan, the General Secretary of the Communist Party of Turkey, delivered a speech in the name of TKP.

TKG GS Okuyan: On the glory days of our red flag, our youth will dance Zeybek and Sirtaki, and we will establish an entirely new life

"We flew over the blue waters of the Aegean Sea to embrace dear friends in struggle, our comrades. Those blue waters are the bridge of friendship for us, the melody of fellowship, and the waves create the voice of freedom. The workers of Greece and Turkey are not separated by these waters but by the exploiting classes of the two countries," Okuyan saluted thousands of communists in Mytilene.

"For many decades, the fight for socialism was tried to be postponed by revisionists and conformists, arguing “now is not the time,” and right now we say socialism must replace capitalism, which has lost all cogency and has given humanity nothing but poverty, hunger, unemployment and war," Okuyan underlined the danger of revisionism during the struggle for socialism against capitalism and imperialism.

"And we will surely win. On the glory days of our red flag, our youth will dance Zeybek and Sirtaki, and we will establish an entirely new life," Okuyan concluded his speech, referring to the cultural colours of Turkey and Greece in the belief that the working peoples of both countries will jointly triumph and celebrate the socialist power. For the full speech by Okuyan: https://www.tkp.org.tr/en/international/the-speech-of-kemal-okuyan-gener...

A portrait of Nikos Zachariadis, created by Turkish communist artist İrfan Ertel, was also presented to Koutsoumbas. Born in 1903 in the Turkish city of Edirne, Zachariadis was a long-term general secretary of KKE and one of the most important personalities of the Greek Civil War.

Meanwhile, after joint seminars, discussions and presentations organized by KNE and TKG, thousands of communists and young people marched to the Mytilene Square with songs and slogans.

Started on July 9, the 30th Anti-Imperialist Camp will come to an end today, July 11.