We will not leave working people in despair

The Communist Party of Turkey held her 2021 Conference with the slogan “We will not leave the working people in despair” on 21-22 August in Izmir. 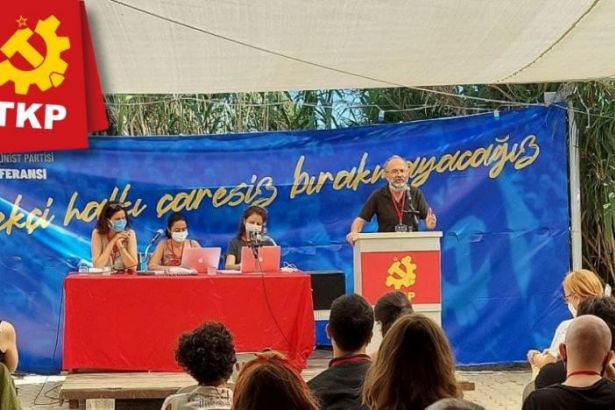 At the conference, which mainly focused on organizational matters and strengthening of the Party, it was underlined that the Party will enter a new era of breakthrough in the upcoming period, and the decision to open many new district houses and party organizations was taken.

It was also decided at the conference to hold a rally with nationwide participation of members and friends, in Istanbul on September 12.

TKP General Secretary Kemal Okuyan made statements regarding the 2021 Conference.

Emphasizing that one of the points that distinguishes the Communist Party of Turkey from other parties is its adherence to its program, goals and principles, Okuyan pointed out that this attitude makes the Party stronger while facing current developments. “What is happening in the world and in Turkey today is the result of historical reasons that are so rooted that they do not need to be re-evaluated every time” he said.

Okuyan said, “In this way, TKP has the opportunity to evaluate current developments with greater courage and detail and to review its own political and organizational goals whenever she needs to. We discussed the possible developments in Turkey’s politics, considering all possibilities for the near future, and we took decisions regarding the Party’s tools to intervene and struggle for each of them.”

‘As long as there is exploitation, injustice and tyranny, there is no rest for us in this world’

Stating that since 2017, the Party has been in a systematic transformation to increase its presence and organization among the working people, Okuyan said that the tools developed in this process were accurate and significant results were achieved, “Of course, we are not a party that will settle for little and be consoled with small successes. As long as there is exploitation, injustice and tyranny, there is no rest for us in this world,” he said.

‘Thousands of new volunteers are joining our ranks’

Okuyan continued his assessment on the conference as follows:

“TKP continues to open district houses, workers’ houses and village houses, we will speed this up even more. Thousands of new volunteers are joining the ranks of our party. We Breathe Down The Bosses’ Neck (PE), becomes more effective as a very important weapon of the workers to claim rights against the bosses. Our party organizations are leading the establishment of Solidarity Committees and Women’s Solidarity Committees. Our people, who see the real face of the AKP government, and the workers who understand that the opposition cannot come with a real solution, act together with our Party. For those who say ‘communism has no chance in this country’, we invite them to our party organizations to meet with us; to witness themselves how we raise hope, solidarity and the goal of a humane country.”

Rally in Istanbul on September 12

Reminding that the TKP will turn 101 on September 10, Okuyan emphasized that they have entered a new era of breakthrough and said, “In a sense, the beginning of this period will be the rally we will hold in Istanbul’s Kartal Square on September 12. We are waiting for those who do not want to surrender this country to darkness, exploitation, imperialism, tyranny and injustice. Our word, our voice is intended for not leaving the working people in despair.”