Food delivery workers in Turkey are preparing for boycott

After hundreds of organized workers’ membership for Nakliyat-İş was cancelled, Yemeksepeti workers are preparing for a boycott. 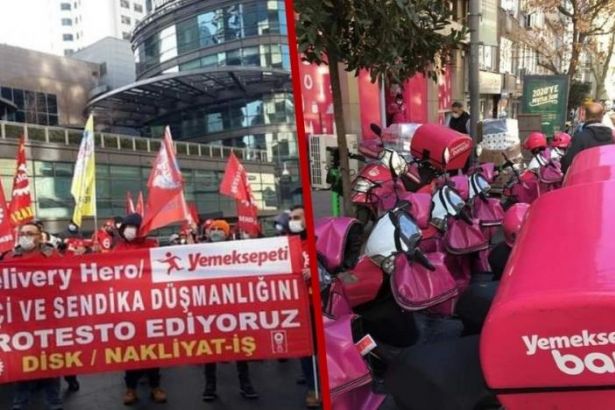 The biggest food delivery service in Turkey Yemeksepeti intervened in the application for the collective bargaining right made by Turkish Progressive Union of Sea and Land Transport Workers (Nakliyat-İş) affiliated to the Confederation of Progressive Trade Unions (DİSK), and changed the line of business in which the workers are registered by interfering in The Social Security Institution (SGK) records. As a result, approximately 2,000 workers’ membership to Nakliyat-İş was cancelled.

Leftist trade unions and organisations, including KESK, DİSK, TMMOB and TTB made a joint statement, announcing that they support the righteous struggle of Yemeksepeti workers and the union, and called the company management for respecting the decision and will of the workers.

With the coronavirus pandemic, especially the working conditions of motorcycle couriers have gradually deteriorated. Many couriers who worked in harsh conditions for long hours lost their lives.

According to the data from Turkish Ministry, as of January 2021, 6 thousand 200 workers are employed in Yemeksepeti across Turkey. Due to their circumstances, Yemeksepeti workers started to organize and become a member of Nakliyat-İş Union, using their constitutional right. Started in the last months of 2020, this process accelerated in January 2021.

Ali Rıza Küçükosmanoğlu, Chairman of Nakliyat-İş, spoke to soL News, explaining the latest situation in Yemeksepeti, the working conditions of the workers and the boycott preparation.

Küçükosmanoğlu stated that as of January 2021, 6,200 people are working at Yemeksepeti, which fulfills online food orders with the “Banabi” delivery application. “It is an online food delivery and takeaway market service. It is also the most corporate company that employs the most workers. While it was a Turkish company before, it was sold to a German monopoly called Hero for 589 million dollars in 2015,” he said.

Saying that the union has been organized in the company since the end of december, Küçükosmanoğlu’s statement is as follows:

“Motorcycle courier service has increased during the pandemic. Sometimes the line of business changes, but it is actually a transportation activity. It gives its service through motorcycle couriers. In the pandemic, at least 190 couriers died in traffic accidents that turned into work-related murders.

The estimated number of motorcycle couriers is over 100 thousand. We have a large number of friends who had an accident, working in a risky environment without any insurance. There has been a general awareness about this situation, but union activity in the field is very important.

The struggle in Yemeksepeti is also important in improving the condition of other motorcycle couriers. Thousands of motor couriers will have regular working conditions through collective bargaining.

There are also attempts by the bosses to disrupt our organizing activity but our we continue organizing despite everything. We made press statements in front of some warehouses. Our strength is based on the organization of the working class. We are waging a class struggle. Even though they try to prevent it through lawless attempts, our organizing activities cannot be prevented.

We want to use the people’s power from consumption. It also falls to YemekSepeti customers. We are planning to do an effective boycott in the coming days. That must have been effective as the company’s advertisements started to appear on TV frequently. In 2005, we held a similar boycott at Coca Cola.

We call upon the employers to respect the union rights and the right to organize, by fighting jointly with all working class organizations and the people as much as possible. We also think that we will succeed in this struggle.”