TKP’s daily Boyun Eğme reveals the anti-environmental policies of the AKP government in ten points while wildfires continue around Turkey. 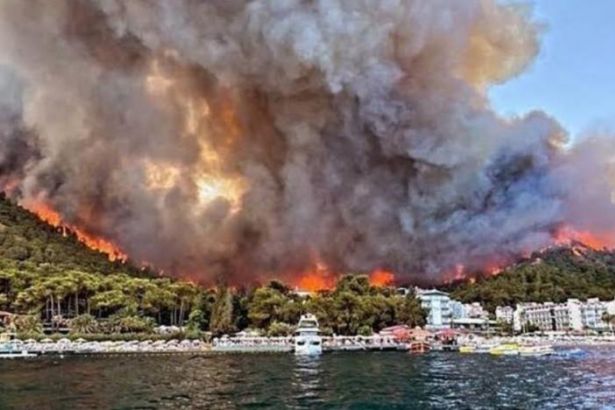 Turkey has been struggling with forest fires that could not be extinguished for days. The fires in Antalya and Muğla, which are the most important tourism centers, have not been extinguished for about a week.

More than a hundred forest fires occurred in other cities as well. The government's failure to adequately respond to fires is heavily criticized by the public. The daily digital newspaper of the Communist Party of Turkey (TKP), Boyun Eğme, summarized the ruling party AKP's "Enmity of the Environment and Public" in 10 articles while the fires continue.

"There is a lot we can do against this system, this anti-people government, where human life has no value.

Most of all, disorganization and loneliness leave them helpless.

Yet you are not helpless. There is so much that can be done.”

1. Traveling in the fire zone with the “Presidential convoy” of hundreds of vehicles!

One of the points where fires broke out in many provinces of Turkey was the Marmaris district of Muğla. Erdogan's convoy of vehicles, which went here on Saturday, caused the traffic in the district to stop and fire trucks to wait. When arrogance and vulgarity are added to the actions of this government, which is completely disconnected from reason, science, and planning, this is the picture that emerges: The AKP's public enmity, which puts itself above everything else even in moments of disaster where seconds matter!

There is a great weakness in firefighting due to privatizations. The Turkish Aeronautical Association (THK), which was established in 1925 and is one of the most experienced institutions in the field of aviation in our country, was constantly downsized during the AKP rule, and finally, in 2019, a trustee was appointed to the institution and it was completely liquidated. Meanwhile, fire fighting was awarded to private companies. Due to the agreements made with these companies, the firefighting planes and other equipment held by THK cannot be used. Execution of firefighting by private companies causes both insufficient capacity and planlessness.

3. Asking the public for money in every disaster!

All over Turkey, news of fires came one after another, and while the AKP government was watching the situation with great disdain, and SMS fell on their mobile phones. In the message sent by the Red Crescent, citizens were asked for 10 TL. AKP, which is neither a disaster management plan nor an emergency action organization, again brazenly asked citizens for money in the middle of the disaster. Moreover, while it is known that earthquake taxes and earthquake donations, which have been collected many times before, evaporate into steam...

It was seen that AKP did not have any disaster and emergency management system. It turned out that the head of the trustee of THK was at the wedding while Turkey was grappling with the disaster. The intervention of the Minister of Agriculture and Forestry was nothing more than saying "escape where you see the fire" and "there is no firefighting aircraft". "Our President gave an order, I hope we will take it,” he said. He sprinkled water on the hearts! Perhaps the most bizarre example of the AKP's lack of planning was the appearance of Foreign Minister Çavuşoğlu in the region when there was a need for organized intervention by all the ministries. Citizens did not favor this show visit and the Minister was protested by being booed.

5. Enacting a law that opens forest areas for construction just before the fire

While we have been struggling with 112 fires in 32 provinces for the last few days, a law was passed by the Parliament on July 28, when the fires started. With this law, "tourism investors" will now be able to build hotels and residences on forest lands, especially on the coasts. In other words, people will benefit less from coasts and forests, and natural areas will be at the mercy of tourism professionals and builders.

6. Clinging to racism to cover up shame by failing to put out a fire!

Unable to extinguish the fires, the AKP is fueling more dangerous fires by laying the groundwork for racism in society. Speaking in Marmaris on the day a Kurdish family was murdered in Konya, Erdogan said, "It is our duty to burn our liver, to rip out our liver," referring to sabotage as the cause of the fires, without any evidence.

7. Throwing tea packages from the bus at the citizens instead of meeting the needs of the people who are in the fire area!

The AKP could not save the image in times of crisis, but now it is ruining it even more. Just as he had done before after a flood, Erdogan threw tea packets at people in Marmaris, whose animals and houses were burned in the fire, as if making fun of him.

8. Having official planes instead of firefighting planes!

We have heard from Erdogan that Turkey, which has 13 office planes under the Presidency, does not have fire-fighting planes. You see, we don't have a single penny to pay for a firefighting plane to save thousands of lives, but we have millions of liras to spend on government planes so that the President, ministers, and undersecretaries can fly with pleasure.

9. Turning the fire into an opportunity with new hotels and buildings erected in the burned area after each fire

Five-star hotels were planted on many forested lands that were supposed to be reforestation after the fire. One of them is the land in Bodrum's Güvercinlik Bay, where the forest fire continues. After the fire in 2008, the Titanic Hotel was built on the land, which was called "Hotel will not be built, it will be afforested" by the then AKP Minister of Forestry. Now we are listening to the same promises of afforestation after the last fire in the same area.

10. Claiming to break afforestation records and giving thousands of hectares of forest land to companies for non-forestry purposes!

The AKP, which prides itself on the trees it planted every time it got stuck, destroyed thousands of hectares of green space during its years in power. Thousands of trees were cut down for mining operations in the Black Sea and Kaz Mountains. The Forest Law underwent nearly 40 changes during the AKP period. Only in the last 8 years, 334 thousand 35 hectares of forest areas have been opened for the use of private enterprises for the “public benefit”. Areas used for non-forestry purposes reached 739 thousand hectares.