On average 500 workers sacked every day in Turkey: What is this Code-29?

While Code-29 was one of the most important weapons of the bosses during the pandemic, a total of 177 thousand workers were laid off in this context despite a ban on labor dismissals on “paper”. 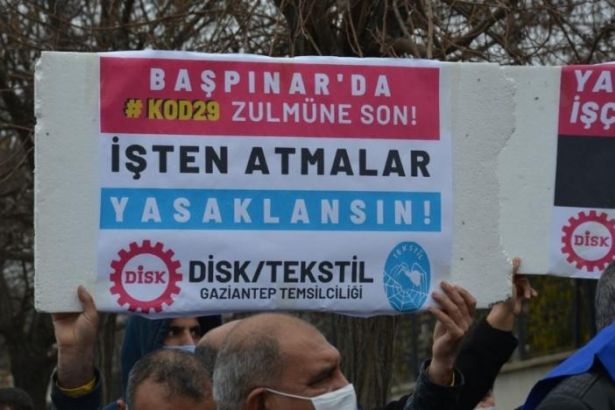 The regulation known as "Code-29", which means the termination of the worker's contract by the employer on the grounds of "situations that do not comply with the rules of ethics and goodwill and the like" in Article 25/2 of the Labor Law, turned into a great opportunity in the hands of the bosses in the days of pandemic.

DİSK-AR shared the information given by CİMER (The Presidential Communication Center) in reply to the article they wrote on the subject.

Unity Trade Union President Zehra Güner Karaoğlu stated that Code-29 was one of the new attacks of the bosses during the pandemic period and emphasized that this gave an idea about the coming period and that there was no other way but to get organized.

In her statement to soL, Karaoğlu gave information about the relevant regulation and also pointed out the struggle to be fought:

"If you are dismissed from Article 25/2 of the Labor Law, the work contracts of workers are terminated without paying compensation and all other progress payments, and workers cannot apply for unemployment insurance. This was an important element in the hands of the bosses prior to pandemic, and workers who joined trade unions or sought their rights were dismissed with this article. But the pandemic period ascribed a special meaning to it. The workers who were laid off during the pandemic with Code-29, could not benefit from any of the rights given by the state. Due to the dismissal ban, the workers who were forced to take leave could benefit from cash wage support. This was 47,70 liras per day. Although this was a very small amount, the bosses did not want workers to even benefit from such a low cash support. They cannot tolerate any rights of the worker.They are the enemies of the workers. Those who are dismissed with Code-29, will not get unemployment wage and will not be able to benefit from short term working grant.

'There is no other way but to get organized'

We know that the workers have filed a court case against Code-29. This Code-29 pressure on workers who have been forced to choose between illness and hunger for a year and other developments show us that in the coming period, more intervention by the bosses and the government in the working life in favor of bosses will come in. Workers have no choice but to organize and fight. "

While the bosses are carrying out various unlawful steps within the scope of Code-29, the struggle against these steps continues.

Asthma patient Gülçiçek Dere, who was working as a lecturer at İstinye University Health Services Vocational School, was fired with Code-29.

Getting in touch with the Solidarity Network, the academician stated that while working at the university, her Covid-19 test turned out positive, that she had asthma and had a bill of health from the hospital, and she requested distance education. But still this was not accepted and she was dismissed with Code-29.

The judicial process and actions will be carried out against many similar cases.

Workers dismissed with Code 29 at Çorum Ekmekçioğulları factory had their rights officially registered by İŞKUR and showed that the practice was unlawful.

Many workers, including Migros and Güven Boya, continue their struggle against the Code-29 attack.