Will your rotten social order get away with this?: TKP

Communist Party of Turkey (TKP) released a statement calling working classes to unite against the hypocrisy and despicableness, after a racist massacre that resulted in 7 deaths. 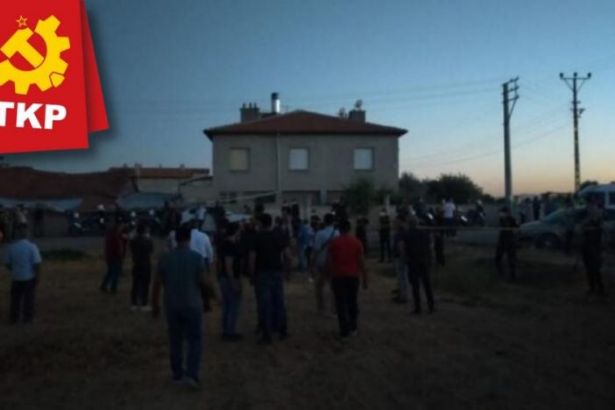 On 31st July, a Kurdish family was attacked for the second time after the first attack on 12th May. During the attack, 7 people from Dedeoğlu family were killed. The attackers also set fire to the house. On 12th May, the family was attacked by 60 people carrying knives and sticks. The attackers shouted that they were the members of Grey Wolves (ultra-nationalists) and they would not let the family survive in the neighbourhood. The detainees were released due to the lack of evidence soon after.

The TKP has released a declaration regarding the migration crisis, wildfires, and the Konya massacre that shook the country.

The TKP’s declaration is as follows:

Will your rotten social order get away with this?

Our country is burning down.

You are going to tame the people with poverty and unemployment;

Look for ways to make a profit out of pandemic, catastrophe, refugees, and every natural and social problem;

Sell and loot every inch of the country and natural beauty while ignoring the destruction of social and natural life;

Turn warmongering, intervening into domestic issues of other countries, and expansionism as the pillars of a foreign policy;

You are going to whitewash your enmity to humanity and the people by blaming Kurds for the destruction of nature and refugees for poverty and unemployment. You are going to keep your ruling positions and demonstrate your guarantees to the bourgeoisie so that they can continue their plunder while Turkey is burning down.

What about Turkey, the people, working classes, and us?

The TKP is calling working classes to unite and grow union against this hypocrisy and despicableness.

The TKP Central Committee and TKP Konya branch will follow how the situation will unfold and inform the public.