Kemal Okuyan: AKP says “leave me alone and I’ll serve you” to imperialism

TKP General Secretary Kemal Okuyan points out that the government seems too prepared for the 104 Admirals’ declaration while drawing attention to the conflict in NATO's agenda with AKP's moves. 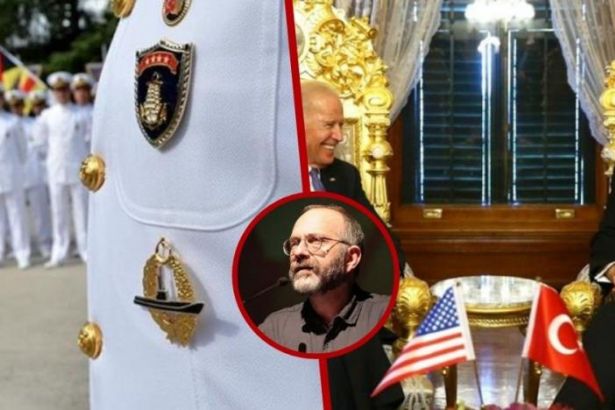 There have been developments that can be seen as axis arrangements in Turkish foreign policy for a while. Internal signals, arrangements made or felt to be made in the state apparatus naturally accompanied this.

In this respect, the Montreux debate, more precisely, the opening of the Montreux Convention up for discussion, some arrangements regarding the internal structure of the army have functional meanings beyond being symbolic. On Saturday night, 104 retired admirals declared an open letter saying it was worrying to open the treaty up to debate. The letter has been targeted by the government immediately, accusing the signatories of attempting a coup. Prosecutors in Ankara have launched an investigation.

Although the "104 Admiral" declaration published in the midst of these developments encountered the usual "coup" noises of the AKP era, it seems that this will gain meaning in totality. While there are reasons to think that the declaration expresses resistance and shows the existence of those who claim the Republic policies that also marked Montreux, especially the complex combination of signatories suggests other possibilities.

We share the comments of the Communist Party of Turkey (TKP) General Secretary Kemal Okuyan on the developments with our readers.

Contrary to those who argue that the presidential elections and the results of the US presidential elections will put pressure on AKP, you have long been saying that it is not a compulsory showdown with the US, where developments will open up new maneuvering areas for AKP, but on the contrary, moves to reconcile with the US and NATO axis should be expected. Are these developments in this direction?

Without a doubt, it is. Erdoğan could not go on for long with this economy and the loss of blood in the Justice and Development Party (AKP). Therefore, it has been trying to establish a new game, thinking that it is time to evaluate the moves it has made in the international arena and the movement area it has acquired. The weakening of US hegemony in the world has created an opportunity for such maneuvers. On the one hand, Erdoğan’s Ottomanist foreign policy initiatives carry an Islamic character, on the other, Turkey is trying to feed the growing appetite of the capital, on the other it served to strengthen the hands of the bargaining table. But this is a dangerous game for AKP, what could be the axis of the reaction to the slightest change in the US to Turkey was seen on July 15. In this sense, it was clear that they would re-negotiate with the USA at the appropriate moment. The election of Biden was an appropriate opportunity, as it meant that the US would increase its pressure on Russia. In an extremely cold-blooded way, Minister of National Defense Hulusi Akar and the President’s Chief Counselor İbrahim Kalın put a weight on the table in this process by laying 2 important cards up on their sleeves: Syria and Ukraine.

There is a declaration of the admirals in hand, but in fact, the "exit" from the Montreux issue came from the ruling party. How do you evaluate the developments in this area?

How the declaration of the retired admirals was prepared, why it was published at midnight, I do not know. There are names among the signatories whose world views are quite different from each other. Pro-NATO, anti-NATO...However, the government's reaction shows that they were prepared for this declaration. And obviously, a move will be made over the retired soldiers towards the ones on duty. Some evaluations are being made in pro-AKP media in this direction. Naturally, this is because an aim of operations such as Ergenekon and Balyoz (“Sledgehammer”) was to eliminate the elements within the Turkish Armed Forces (TSK) that did not favor some of NATO's projects. Then, with July 15, NATO and anti-US elements were used in the process of strengthening the hand of the government against the USA. Now in the Ukraine-Black Sea, Turkey is actively in the field and NATO plays an important role in moves facing Russia. Naturally, there is a need for a suitable caderisation.

The Black Sea agenda starts from the straits for NATO and reaches Ukraine. What do you think about the steps taken by AKP and what they can do from now on?

We have entered a very sensitive and dangerous process. There is unconfirmed news, but it is obvious that NATO troops are deployed to Ukraine. The resurgence of conflicts in Donetsk and Lugansk would have serious consequences. I don't think Russia will back down in that area. However, events are developing multidimensionally. A few months ago I said that the Biden administration would attack from two points, the Baltic and the Black Sea. This is exactly what is happening right now. In the Baltic, harassment against the Nord Stream 2 line has intensified, warships are constantly confronting in the Black Sea, and there is mutual accumulation in the border regions of Ukraine and Russia. AKP is extremely determined on these topics. Cooperation with Ukraine is developing at an incredible pace. Drones are being sold to Ukraine, engines are being brought for drones from there, Ukrainian President Zelenskiy, once again, is coming to Turkey. And at this time, the Montreux Convention is starting to be discussed. Everything is too consistent. The AKP says, "Leave me alone, do not put too much pressure on democracy and human rights, do not put more burden on the economy, in return, let me offer unlimited support to some of the big moves that you cannot do without me." A wise move that will also frustrate those who oppose AKP from a NATO perspective. Today, the confusion in İyi Party regarding the retired admirals’ declaration is the best evidence. Not a single element of the opposition of the establishment can and does not object to AKP's orientation in harmony with US imperialism. Just some token words are spoken.

When we add the possibilities regarding Syria, the pointer turns towards Russia. Could this be possible considering the "block" that took shape in the last few years of the AKP rule? How does this affect the block?

AKP has already called out to the US from the most authoritative circles: "Cooperate with us, democracy will come to Syria.” The AKP government is already settled in Syria. And they do not have an agenda to withdraw from there, they have created an economy, they are opening universities. Outside that region, there is a region controlled by the PYD and the US together. And the region in the hands of the Syrian State. I think it is very difficult for Russia to change this three-part status quo alone. Therefore, Turkey is saying "if you do not touch me, we will accept this status quo, and we will use it to weaken Assad together" to the United States. Multiple birds with one stone!

Can we interpret the 104 Retired Admirals’ statement as a sign of a crack? In other words, does this declaration also point to tension in terms of the choices to be made in the axis of Russia and NATO in the power block, at least with what is said under the topic of Montreux?

A crack would be an exaggeration. It seems to me that AKP has decided to get rid of a “burden”. The bad thing is, anti-imperialist reflexes dulled in this process in the society in Turkey. While waiting for democracy from the West, some principles were forgotten. Now, I don't think these principles will be remembered again when Erdoğan is back on the US-NATO axis.

So, will this process proceed as Erdoğan wants? So is everything that simple?

Nothing can be simple in this area. What we are saying now points in a direction. It is only with such fine calculations that road accidents become possible. In fact, the success of this maneuver may shorten Erdoğan's political life. I am not saying we will experience and see them. We need to make the struggle stronger against imperialism, exploitation, international monopolies, reaction, and war-monopoly.