Migros supermarket chain workers were detained in İstanbul for protesting the boss of Anadolu Group in front of his villa following a special action ban imposed on the neighborhood by the district governor office. 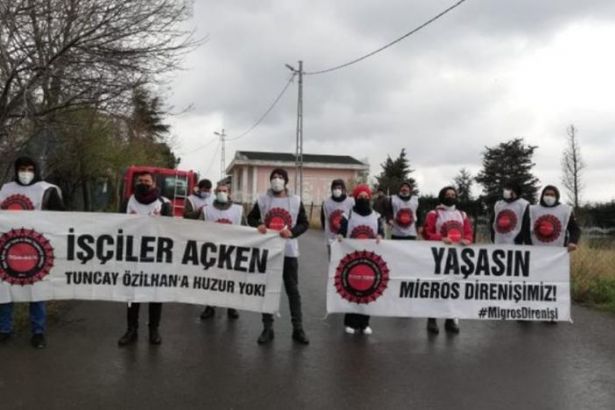 The resistance of warehouse workers organized by the Warehouse, Port, Shipyard and Marine Workers Union (DGD-Sen) in Anadolu Group’s grocery store chain Migros and fired with Code 29, continues on its 86th day.

Code 29, which is the "exception" of the dismissal ban during the pandemic process, shows that the employment contract was terminated on the grounds that the workers displayed "behaviors that do not comply with the rules of ethics and goodwill” which in Migros workers’ case is union membership.

16 workers who took action by opening banners in front of Anadolu Group Chairman Tuncay Özilhan's villa in Beykoz, stating "There is no peace for Özilhan when the workers are hungry", "Long live our Migros resistance" were beaten and taken into custody.

Police had attacked the workers in front of Özilhan's villa the day before and detained many workers. Beykoz District Governorship had also decided to impose a special ban for protests in the Cubuklu district, where Özilhan's villa is, in order to prevent the workers from protesting yesterday.

However, Migros workers and the members of the Construction Workers’ Union (İnşaat-İş) who came to support them disavowed the ban and gathered today to make a press statement in front of Özilhan's villa. Police battered the workers and detained them.

'Özilhan had us detained with instructions'

DGD-Sen President Murat Bostancı, who was detained, said that they are currently undergoing a medical check in the hospital in Paşabahçe and will be taken to the Beykoz Police Station. Speaking to soL News Portal, Bostancı talked about the ban decision of the district governorship by stating "While a special law is passed for the rich, the freedom of organization of the workers is not recognized. The workers are dismissed with Code 29. We have been detained for the third time. Despite all these pressures, we will continue our resistance,"

In the statement made on the social media account of DGD-Sen, "Tuncay Özilhan, who called for democracy at the Tüsiad General Assembly, had us detained on the 86th day of our resistance. Moreover, he also had the governorship impose a prohibition of action in Çubuk district, where his villa is located. We ask: Is this state the Özilhan state?”