‘Manifesto’, a theatre play adapted by Turkish artists from the Communist Manifesto, the prominent pamphlet by Karl Marx and Friedrich Engels, will make its world premiere with English subtitles on April 21. 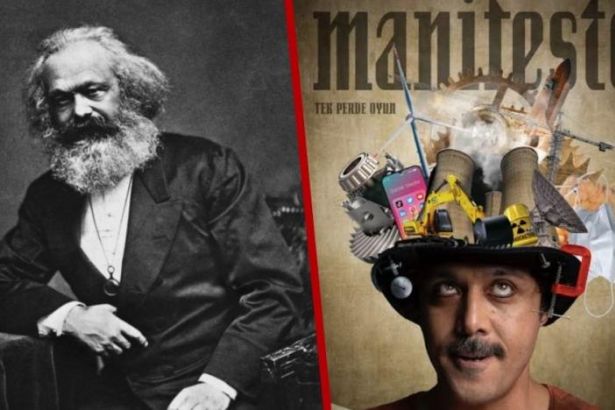 soL News talked with director Harun Güzeloğlu and theatre player Cansu Fırıncı on their new theatre play, ‘Manifesto’, adapted from The Manifesto of the Communist Party, a world-renowned pamphlet by Karl Marx and Friedrich Engels.

Created by a group of artists from the Communist Party of Turkey (TKP), ‘Manifesto’ will make its world premiere on April 21, at 09:00 pm GMT +3, with English subtitles, and tickets are available at: https://www.modasahnesi.com/manifesto-oyun-sandali?p=seans

Online streaming gives audiences a chance to experience live theatre from their home, anywhere in the world.

Below you can read the interview with communist theatre artists, Harun Güzeloğlu and Cansu Fırıncı, on the production process of their new play ‘Manifesto’, how and why the Communist Manifesto inspired their play.

We already know and follow you; but still, would you like to talk about Oyun Sandalı for the readers?

Harun Güzeloğlu (director): Oyun Sandalı had been launched with a consensus as we say, “Everything started with a few people on the boat.” Cansu and I had been working on a play adapted from [Persian scientist and poet] Khayyam’s life and verses. This was perhaps the courage of reading dozens of experiences in history, starting with a few people on a boat with growing numbers later on. Perhaps we could not bear the consequences of tiredness stemming from attempting to persuade a crowded cadre of our own theatrical journey. First of all, our perspective on theatrical production requires a left-wing consciousness vis-à-vis the problems of the country.

For instance, Cansu was the one who offered the Khayyam project, and [famous Turkish pianist] Fazıl Say was on trial because of a Khayyam verse he shared. We staged this play with full audiences for one and a half seasons. Then, as the Gezi Park resistance began, we canceled the play and invited the ticket-owners to the Gezi Park protests. Later on, we had to suspend our production for three and a half years because of my financial problems. Have my financial problems come to an end? Of course, no. Later we met again with the adaptation of Nâzım Hikmet’s ‘Letters to Taranta Babu’.

Our second project was ‘Gölgeler’ [Shadows] that we canceled after the fifth stage as it did not go on as we had wished. Then one more person got on the boat with the play ‘Furuğ’. Derya Günaydın joined us with her excellent performance in ‘Furuğ’. Now it is time for the world premiere of the Communist Manifesto that I have directed and adapted following Cansu’s recommendation.

“The dream of Brecht”

The Communist Manifesto is a work starting with “A specter is haunting Europe — the specter of communism,” and ending with “Proletarians of all countries, Unite!” It is the greatest manifestation of humanity’s struggle for equality, liberty, and fraternity, it has been the guide of the communists all over the world since it was penned. What did motivate you to adapt this work for the stage?

Cansu Fırıncı (theatre player): As far as I know, this was the dream of Brecht. He could not live long enough to do so. We were excited about staging a new solo play after ‘Taranta Babu’. This new play was going to be a more assertive text while it was supposed to be in harmony with and enrich the repertoire of Oyun Sandalı. The play was going to support the universal labor struggle both in Turkey and the world. I could not find a better option than the Manifesto.

Harun Güzeloğlu: Indeed, our choices for plays are related with a general motivation, which is alarming our audience thanks to the high interaction of the art of theatre, albeit not with addressing from a higher point but enabling them to know that we are standing shoulder to shoulder. We are the children of this country, too; we are struggling with almost the same problems, and our job is to discuss these issues that we problematize with our audience by means of the resources of the art of theatre…

This is exactly why we have adapted the Communist Manifesto. The labor and the lives of the laborers are not as valuable as a sold commodity. As a must in life, an organization has been pushed back by a new attack, wave, and tribute of individualism and reaction. Now women’s rights are mentioned along with massacres. They are trying to justify child abuse with marriages while they are trying to normalize the exploitation of child labor with transformations in vocational high schools. Our nature has been plundered. We could have reached the Moon if we used concrete and asphalt paving in the last twenty years. The right to free education and health … too numerous to be counted.

This is why we need to remember and remind again how necessary organized life is. Sevda Şener (rest in peace) wrote in brief: “If you exclude the educational aspect of theatre, only show remains.” And, we are not showmen but theatre artists.

The Manifesto is a theoretical text, yet we can easily argue that it has a literary aspect as well. Still, was not it difficult for you to adapt the work for the stage? We guess you have strived for making this text more comprehensible as you are planning to bring it together with the large sections of the working class and audiences around the country. Do you think you have achieved in this manner?

Cansu Fırıncı: In my opinion, the Manifesto is a text that also involves humor, irony, and literary taste. Of course, there are some difficulties in adapting and playing it on the stage, which, however, is not impossible. Artistic productions that impress and excite the masses are created in this way.

Harun Güzeloğlu: Yes, the adaptation process was really difficult. Particularly abridgment and turning some parts into lyrics was really difficult for me. The presence and encouraging recommendations of dear Aydemir Güler [TKP Party Central Council member] were very useful. Thank you very much, Aydemir…

The text that we are working on at the moment is the third version because we had to stop the rehearsals twice. This was yet another impact of the pandemic. It seems that we will still continue to work for making the text more comprehensible until the premiere. We will understand whether we are successful after meeting with the audience. It is unlikely to test it without the audience.

When will we see the play? Would you like to talk about your plan for the premiere?

Harun Güzeloğlu: Moda Sahnesi has created a wonderful infrastructure for the live broadcast. The plays are broadcasted live from the stage, bringing the players and audience together, though not in the same space. The play could be seen from all over the world thanks to the Internet connection. We will stage the play with English subtitles at the premiere.

Cansu Fırıncı: [The world premiere] April 21, at 09:00 pm GMT +3. Nâzım Hikmet was not afraid of his own century, the 20th century. He was happy to live in the ranks of the 20th century. We are not afraid of the 21st century, either, knowing that our century is the age of the transition to socialism. May ‘Manifesto’ bring this good news to humanity.

“It is really of us that the story is told”

Marx and Engels penned the Manifesto as a guide of action for the working class. In other words, the readers were the subject of the struggle at the same time. From this point of view, what would like to say to the audience of the play?

Cansu Fırıncı: No art form can change the world alone, but the struggle for changing the world could not be achieved without arts. Theatre is the rehearsal of revolution. In brief, our text is in accord with the guide!

Harun Güzeloğlu: So many things were written and talked about the text. What I can tell about the version we have prepared is that it is really of us that the story is told. We must put an end to this social order of exploitation that crushed human dignity and corrupted everything, to this spoiled and parasitic order of bosses that replaced the reign of sultans for the reign of money.

“Stay with us at the premiere”

Cansu Fırıncı: We know that we are not staging an ordinary play. We have been in a high tempo to stage it properly. We want the specter to rise from the stage and haunt all over the world, which is only possible with the support of the audience who never bows down.

Harun Güzeloğlu: For the last word, please stay with us at the premiere. Do not ever think, “I can somehow see it anytime.” It is really hopeful for us behind the scenes to know that hundreds of people are watching us at that time, we need this hope more than ever. Greetings to those who never bow down...