“We don’t settle for less, or the lesser evil! A socialist country will rise in the hands of women“ !Communist Women of Turkey call for 8 March, the International Working Women’s Day. 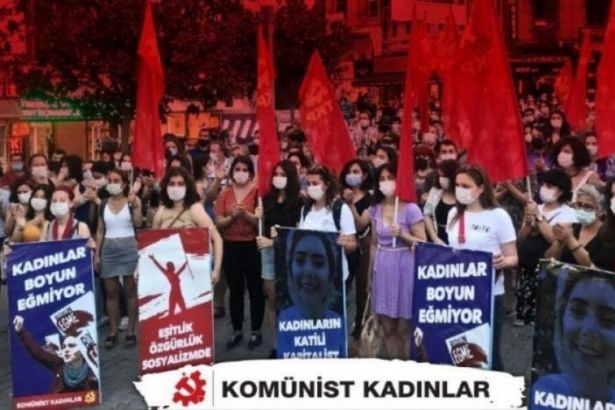 Communist Women of Turkey are coming together in Ankara, İstanbul, İzmir and Antalya on March 8, The International Working Women’s Day.

The call of the Communist Women who say “We do not settle for less or the lesser evil! A socialist country will rise in the hands of women! We will meet on March 8” is as follows:

In the Women’s Solidarity Committees, the steps of a struggle for an equal and free life for all humanity are tried to be built together.

Brochures on topics such as violence against women, physical and mental health of women, mobbing, right to free and quality daycares, exploitation of women’s labor are widely distributed. Despite the difficulties of getting together due to the pandemic limitations, the committees try to find ways to come together. Some trainings are held with the contributions of experts on topics of exploitation of women’s labor during the pandemic, women's mental and physical health, legal process in harassment and violence, and the right to health and education. The ways of fighting not only current problems, but the order itself that creates and reproduces these problems over and over are discussed. Naturally, women are the pioneers of this work, and the first contacts regarding the problems faced by women in neighborhoods and workplaces are made with women.

Announcing their establishment first in Turkey’s Çanakkale, İzmir, and Ankara in recent months, and increasing rapidly, Women’s Solidarity Committees are also preparing for a photo exhibitions to visualize and propagate the working women's struggle against oppression, discrimination, and violence on March 8.

Women who want to be convinced that nothing will change reach out to each other with the idea of ​​an exhibition without bowing down.

The photographs will be exhibited not only on the internet but also in some neighborhood houses of the Communist Party of Turkey (TKP) and certain places.

The exhibition places have been recently announced on social media accounts of TKP.