Traditional Easter march was held in various cities of the Federal Republic of Germany. 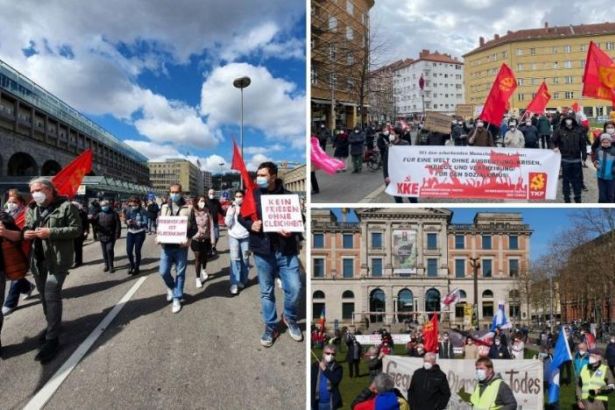 The traditional Ostermarsch (Easter march) was held in various cities of the Federal Republic of Germany last weekend.

Following demands were made in this year’s march, which is called as “Peace Easter March”;

-Nuclear disarmament of the German Army, de-nuclear weapons of the Federal territory of Germany,

-Decontamination of the German Army from drones and stop the support of drones to the US Army,

-Reducing the budget allocated to the army from the Federal Germany Gross National Product to less than 2%,

-End of provocative and hostile policies against Russia and China,

-Immediate withdrawal of the German Federal Army from foreign operations,

-Stable disarmament and transformation of the arms industry for civilian needs,

-Signing an agreement to prevent the spread of nuclear weapons,

-Using the budget for educational, health, social and cultural needs of society rather than armament.

While the marches were held in various cities of Germany, TKP-Germany Organizations showed their presence in big cities such as Berlin, Munich, Stuttgart, Hamburg, Bremen, and Frankfurt; communists walked in blocks consisting of TKP, KKE, and DKP in most cities.

While various unions, parties, and organizations participated in the march, the TKP German Organizations distributed their leaflets and carried signs pointing out that the struggle for peace was a class struggle. The leaflet, titled “Working Class Internationalism Against Warmongering of Imperialists”, included the following lines:

The Communist Party of Turkey calls for the ones who are on the sides of peace and struggle against war; It is imperialism and the bourgeoisie’s search for profit that creates the danger of war and is the driving force behind it. The threat of war on the peoples will continue to exist as long as capitalism and the bourgeoisie exist. For this reason, TKP calls for an organized struggle to change this order!

On the other hand, another demonstration that took place at the same time as the peace march in Stuttgart was the one organized by the Querdenker movement. The march took place without any distance and hygiene rules and a mask.

The Stuttgart police headquarters made a statement before the action stated that hundreds of police will accompany the action and will have (anti-riot) water cannons vehicle to be used in necessary and extreme cases. In the statement made afterward, it was shared that approximately 10 thousand people participated in this action.