The petitions collected in İzmir with the request of a kindergarten under the leadership of Bayraklı Women's Solidarity Committee, were delivered with a gathering in front of the municipality. 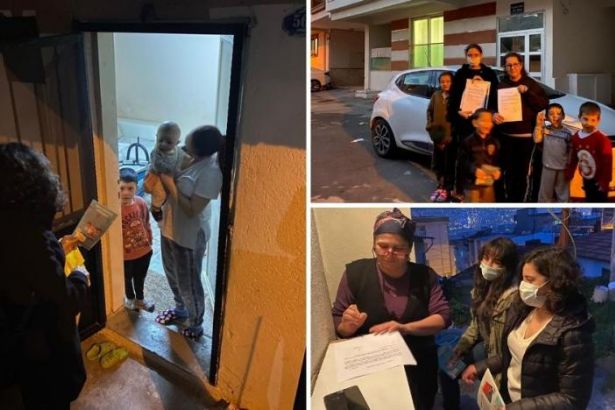 In response to the unkept election promise of Bayraklı Municipality in Izmir titled "24 Kindergartens for 24 Districts", despite the fact that 2 years have passed since the elections, Bayraklı Women's Solidarity Committee had started a petition.

The petitions titled "We want a kindergarten in our neighborhood" gathered under the leadership of the committee, were delivered to Bayraklı Municipality on March 3 with the participation of the signatory families. Many residents attended the gathering in front of the municipality with their children.

At the gathering, the Communist Party of Turkey’s district chair Rahmi Rençber and, on behalf of Bayraklı Women's Solidarity Committee, a mother of 3 children, Duygu Özcan took the floor.

Reminding that hundreds of petitions were collected, Rençber said, "This is a beginning, we will adhere to this issue.” Duygu Özcan, on the other hand, stated, "We want a kindergarten where we can leave our children safely. Keep the promises.”

“We will keep track of Bayraklı Municipality's promise of "24 Kindergartens for 24 Districts". We handed over the petitions that we collected, neighborhood by neighborhood, street by street, to the mayor's office after the gathering we held with our parents and children today," the committee said.

Following the submission of the petitions, a photo exhibition titled “It’s Time for Winning the Tomorrows" was opened to visitors at the TKP Bayraklı District House.

The Women's Solidarity Committees have been established mostly under the district houses of TKP since September 2020. Over 40 Committees across the country have been actively organizing events and meetings, gathering together to raise solidarity among themselves and the women in their districts. The Committees also initiated solidarity campaigns for women experiencing violence, for the right to access affordable daycares, for the right to access quality education.