Macron aims to establish some kind of "Council of Islam" with a bill that fundamentally contradicts "1905 French law of laicism law". While competing with Erdoğan, he plays into Erdoğan’s hands. 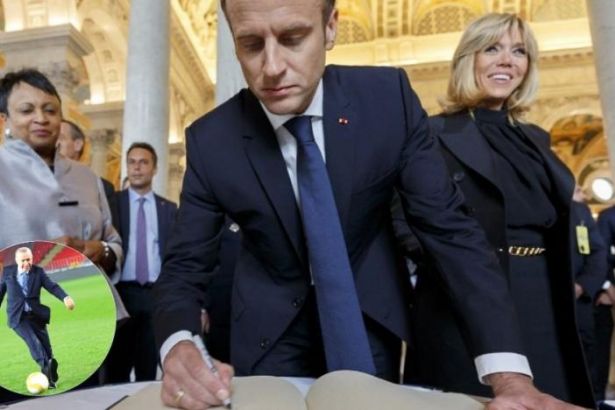 The English translation of the article is as follows:

After the legislation proposal by the Macron government of France, in the name of "preventing separatism," two crucial aspects recently stepped forth regarding the discussions on the law. One of them was the statement of France's Minister of Higher Education, who claims that "Islamo-gauchisme" (Islamic leftism) poisons the universities. After many respective academic and scientific institutions insistently repeated that it is not the case, Minister Vidal had to step back from his own words.

Another critical aspect of the discussion is foregrounded in the news and interpretations by media outlets close to the Macron government, which are claimed that "anti-separatism law" will help build a barrier in front of the attempts of Erdoğan's Turkey to bring down France. JDD, and Le Figaro, which belongs to the infamous arm producer Dassault Group, take the lead in these discussions. The discussion's escalation came to the point that the Turkish ambassador in Paris tried to answer the claims. How much of he could answer is not the topic of this writing.

In the law that fundamentally contradicts the "1905 French law of laicism law", Macron aims to establish some kind of "Council of Islam." This council will create a "French Islam" on the condition that it remains within the limits of the framework of the French State and will train imams. Why does this attempt contradict with laicism? The law of 1905 separated the Church from being the political and financial partner of the State. Rightfully, no one tried to establish a council and create a "French Catholicism" during that period. It was the right thing to do.

On the one hand, with the media organs that are close to him, Macron tries to give an impression as preventing Erdoğan's/Turkey's efforts to infiltrate into France. He intrinsically removes the difference that allowed French intellectuals to arrogantly say, "The real laicism is ours; yours are just supervision of the religion by the state." Macron clearly establishes a religious affair institution by imitating Turkey. I have no doubt that this council and its imams will have no legitimacy in the eyes of the millions of Muslims living in the country.

France did not begin to use Turkey and Turks as a scapegoat with the current Turkish government. It is almost a cultural reflex in French politics. The most important reason for this is attacking Turkey brings more than the loss.

It is not surprising that French rulers’ regulation against millions of Muslims living in the country who do not have any problem with laicism really means a conflict with Turkey. The smart banker boy, while saying, "Let me show this as a move against Erdogan and not upset the overwhelming majority of Muslims who are not Turks, and the Gulf countries, which are the main financiers of Salafi tendencies within them," intrinsically serves Erdoğan by extending the title, "Protector of Muslims" beyond the Turks living in France. On the other hand, he breaks the laicism to pieces that are among the most important weapons of the people, not just in France but all over the  world, against the darkness.

I am not sure that Erdoğan can manage to benefit from this opportunity. Erdoğan regime's answer to the maneuver of Macron, which in my opinion will be thrown away after the first elections, will be gaining a few thousands of votes and the whim to increase its power in the "Arab streets" of France. This will result in the fact that Turks who live in France will be seen as the "fifth column" in the eyes of the French Police State. In addition, Turkish teachers who can do their job with the bilateral agreements in almost forty years (ECLO) will be seen as "persona non grata because of spying." On the other side, the Turkish State takes revenge of Turkish teachers from the French academicians of Galatasaray University.

The result of this conflict for both sides is: "lose-lose."