"We think that, as a community committed to international laws and upholding universal human values, the EU must make an active effort and help through all possible channels to lift the 60-year-old destructive and criminal US blockade of Cuba, which has been repeatedly aggravated over the years by new restrictions and punitive measures from the U.S. governments." 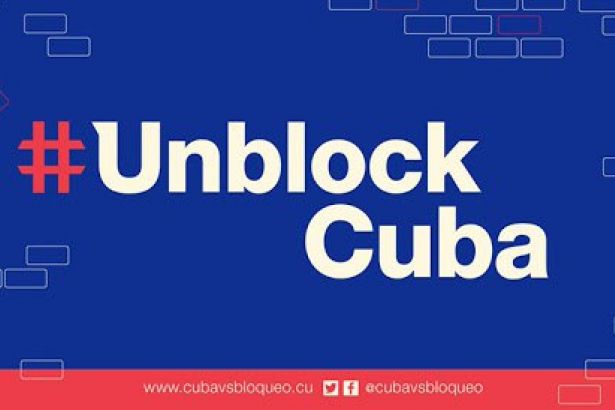 23 solidarity organisations from 17 European countries have signed a collective letter in support of ending the U.S. blockade against Cuba.

Signed as part of the Europe-wide UNBLOCK CUBA-campaign, the letter is used to document the urgent and strong push for an end to the criminal blockade against Cuba.

Below is the full letter:

Josep Borrell, High Representative of the EU for Foreign Affairs

Manfred Weber, Leader of the EPP Group in the EP

Iratxe García, Leader of the Progressive Alliance of Socialists & Democrats in the EP

Dacian Ciolos, Leader of the Renew Europe Group in the EP

Marco Zanni, Leader of the Identity and Democracy Group in the EP

Pilippe Lambert, Leader of the Greens - European Free Alliance in the EP

Ska Keller, Leader of the Greens - European Free Alliance in the EP

Raffaele Fitto, Leader of the European Conservatives and Reformists Group in the EP

Manon Aubry, Leader of the Left Group in the EP

Martin Schirdewan, Leader of the Left Group in the EP

As associations and organizations in Europe for friendship and solidarity with Cuba, we would like to express our desire and insistence that the European Union maintain, develop and strengthen constructive relations of mutual respect and mutually beneficial cooperation with the Republic of Cuba, based on the principles of the U.N. Charter and specifically the Agreement for Political Dialogue and Cooperation signed in 2016 between the EU and Cuba.

We think that, as a community committed to international laws and upholding universal human values, the EU must make an active effort and help through all possible channels to lift the 60-year-old destructive and criminal US blockade of Cuba, which has been repeatedly aggravated over the years by new restrictions and punitive measures from the U.S. governments.

We would like to draw your attention to the heavy damage this blockade has inflicted on the Cuban people, causing them in economic terms more than $ 144 billion in damage over the past decades, as well as uncountable destruction and social, political and cultural problems. These severe effects are particularly worrying and inhumane today, in the context of the global Covid-19 pandemic, when US enforced restrictions on Cuba's access to medicines and medical equipment continue to apply.

U.S. sanctions, which are already being applied on to third countries due to their criminal “extraterritorial effects”, are also seriously damaging the interests of European investors and entrepreneurs doing business with Cuba, and even harming many civil society organisations, families and ordinary citizens. This is no longer acceptable, it has to stop.

In November 2019, for the 28th consecutive year, the United Nations General Assembly voted 187-2-3, in support of a resolution calling for an end of the U.S. blockade on Cuba. Nevertheless, the U.S. administration did not follow all those worldwide calls for an end of the damaging blockade, which can be seen as an act of war, according to the U.N. Charter. The European Union has therefore the responsibility, the right and the capacity to play an independent role in encouraging the practical implementation of the will and desire of the peoples of Europe, and to strengthen multilateralism by acting to stop or circumvent the blockade.

At the same time, we Europeans in particular must not forget the dedicated assistance provided by Cuban doctors from the Henry Reeve International Medical Brigade in the fight against the pandemic in EU member Italy during a very difficult period of the coronavirus crisis. The medics from this brigade help with their high professionalism and human solidarity many other countries around the world, which makes them an exceptional humanitarian example for all of us.

The European Union ought to have a clear and unequivocal stance against the punitive and indefensible policies embodied in the unilateral U.S. anti-Cuban Blockade legislation. This should include a clear statement informing the US administration of the EU’s intentions to strongly support the rights of the member states to trade with Cuba without the threat of fines being imposed by the US Office of Foreign Assets Control (OFAC). Further, we believe that the EU should clearly endorse the right to trade with Cuba and the refusal of any EU companies to pay any fines which OFAC might seek to impose on them for trading with Cuba. Such actions would help to implement “Council Regulation (EC) No 2271/96 of 22 November 1996”. In this regard, the European Commission should call upon the World Trade Organisation to indict the U.S. government for its violations of international trade laws and principles. With such action the EU would support many other countries, companies and organisations, in their perfectly legal desire to do business with Cuba.

We call on you and the European institutions to do whatever is necessary to persuading the US Government, led by President Joe Biden, to lift the blockade of Cuba. This would be an important and positive step not only for the Cuban people, but for all the peoples of the world, because it would turn its back on confrontation and sanctions and set an example of constructive and humane international cooperation. It is precisely this path that humanity urgently needs in order to be able to move towards a future of sustainable development and stable peace.

The undersigned 23 organisations from 17 countries

•    AUSTRIA: Michael Wögerer (President), Österreichisch-Kubanische Gesellschaft and
Prof. Alfred Kohlbacher (President of the Board of Trustees)

•    BOSNIA AND HERZEGOVINA: Sead Halilovic (President), Association of the Bosnian
and Herzegovinian-Cuban Friendship