The Parties of the European Communist Initiative send a warm militant salute to the workers of our Continent, to the working class of the world. 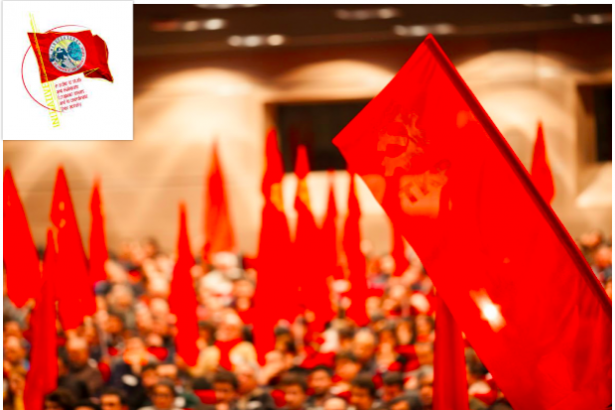 European Communist Initiative (ECI) made a statement saluting the working class of the world on May 1st.

The Parties of the European Communist Initiative send a warm militant salute to the workers of our Continent, to the working class of the world. We are inspired by the flame of the workers of Chicago, we honor the men and women of our class who fell on the battlefields of the class struggle.

The struggles of the workers in every period and around the world are the only ones that have made it difficult for the exploiters, who have brought conquests, have questioned their dominance and power. Because the power of the workers can abolish capitalist slavery. This is exactly what the exploiters are afraid of.

Today, capital, its unions such as the EU, its governments, and its parties are stepping up their attacks on workers in the name of overcoming the capitalist crisis accelerated by the pandemic, which in practice means a pile of funding for the capital and new burden for the people.

This situation, which seems surprising at first glance, shows the real face of capitalism in Europe and globally.

This is not a coincidence. In Europe, where the developed capitalist countries are located, 1 million people lost their lives and at least 2 million people were added to the army of the unemployed, billionaires' wealth increased by another $1 trillion during the same period.

This is no coincidence either…In countries with the largest economies, the degraded and commercialized public health systems collapsed and became systems “for one disease”, herd immunity was tried, and health protocols were violated for the profits of the monopoly groups. Reactionary, unscientific statements were featured in the press, and even leaders made these statements themselves. Healthcare workers were exhausted, they lost their lives because the necessary protection was not provided. Grocery store workers, warehouse workers, couriers, construction workers, cleaning staff, who were forced to work under risky conditions and travel by public transport, got infected. While competition is raging between the pharmaceutical industry, bourgeois states and the EU there is no room for patients in intensive-care units. Since the necessary requisition was not made, private health groups will hoard amid a pandemic to the detriment of the people and the resources will not be made available to the public. Vaccines are delayed, and more and more people are at risk because of the monopolies’ insistence on patent rights.

Violence and discrimination against women workers at home, on the street, and at work are increasing, and exploitation is deepening. Moreover, during the time spent in isolation, the burden of taking care of family members has been placed on women workers.

The treatment of many patients with chronic illnesses was disrupted due to the inadequacy of healthcare systems, and some lost their lives solely for this reason.

Teleworking, under the pretext of the pandemic, has now become a permanent form of work. Workers are expected to work almost like robots in their homes by covering their expenses from their own pockets without contact between them and without trade union action. Flexible working does not save time. It is the accelerated version of exploitation, and it is a trap.

While rescue plans have been made for big monopolies over the past months, charging new anti-labor measures, green and digital taxes to the people at the same time that the pandemic has been an excuse for layoffs, salary cuts, and unpaid leaves.

The conditions created by the pandemic are not limited to these. For a year, young people have been deprived of their basic education rights. Children who cannot go to school are included in labor exploitation at an early age. Those who can attend school face the threat of unemployment when they graduate.

While large budgets were allocated for weapons, NATO exercises, and EU military projects, there are millions of refugee workers whose lives were turned upside down by imperialism and they are not able to fully benefit from any basic services.

In short, humanity has been struggling for over a year with a pandemic that could have been defeated in a much shorter time in a world with socialism, and capitalism is the biggest obstacle to winning this struggle.
Moreover, there is now a new dimension of pragmatism: The pandemic is used as an excuse to silence laborers who want to defend their rights, to ban trade union and political activities, to get organized, to strike, and even to ban May Day celebrations.

However, May 1 is the most important and historical day of struggle of the working people against exploitation. It is the common day of celebrating the fight of laborers who seek for their rights from all over the world. We will not let them steal our May Day! Their bans show how much they fear the working class as their real adversary.

We don’t want to waste any more time.
We want the right to healthcare for all, jobs for all, social insurance for all.
We want to live and breathe humanely.

We call on all working people to fight for a new social order in which there is no exploitation, in which we don’t lose our loved ones for nothing.