Friends of Cuba said “No!” to the blockade in Ankara, İstanbul and İzmir

Cuba -Turkey Friendship Association José Martí (JMKDD with its acronym in Turkish) held actions in the country’s three major cities, as part of the international campaign to demand the lift of the US blockade against Cuba. 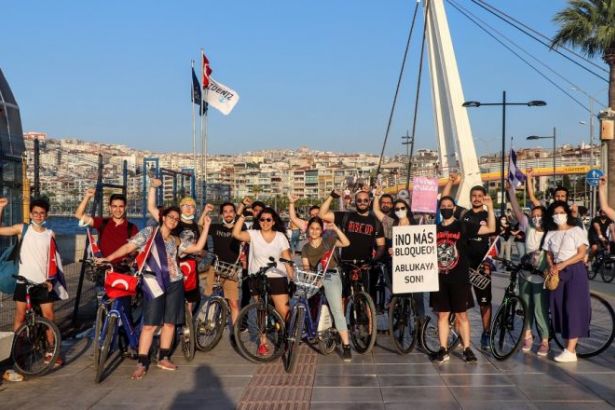 While the US blockade against Cuba continues for more than 60 years with all its violence, the annual vote to be held in the United Nations to lift the blockade will be on June 23, 2021, this year. Before the vote, over two thousand friendship and solidarity organizations with Cuba from all over the world organize anti-blockade actions in cooperation with the Cuban Institute for Friendship with Peoples (ICAP), based in Havana, in April, May and June.

Upon the call of Cuba-Turkey Friendship Association José Martí, this month’s actions took place on May 28 due to pandemic restrictions on May 29-30 in Turkey.

Friends of Cuba met at Anıtpark in Ankara. Cuban Ambassador Luis Alberto Amorós Nuñez also joined the action. Friends of Cuba called for the immediate end of the unlawful and inhumane blockade imposed by US on Cuba. Yasin Çalış, a representative of the Association in Ankara, drew attention to the dimensions of the economic and financial blockade the US has implemented for more than 60 years. He stated that the blockade now bears a genocidal nature and that the Cuban people cannot even reach their basic needs because of the blockade. “A small example”, said Çalış, “at the beginning of last year, at the time when the Covid-19 pandemic swept the whole world, Cuba wanted to purchase respirators which are of great importance in the fight against this disease. Despite previous agreements, US companies prevented the supply of these devices to Cuba due to the blockade. Cuban people have faced such difficulties in accessing the healthcare equipment they need in the midst of the pandemic. The 60-year history of the blockade is full of hundreds of examples like this. However, Cuban people continue to resist together with their friends from all over the world and will not bow to the blockade”.

Thanking the participants of the action, ambassador Luis Alberto Amorós Nuñez stated that friends of Cuba organized similar actions around the world against the blockade and showed their support to Cuba with convoys of various vehicles, bicycles, and pedestrians. Amorós Nuñez emphasized that Cuban people were aware of this support and that they felt stronger and continued to resist. He stated that they are sure that the peoples of the world will support Cuba in the vote to be held at the UN General Assembly on June 23. Emphasizing that “Do not doubt that Cuba will resist despite all difficulties and will defend its right to sovereignty and socialism”, he finalized his speech. Participants of the action organized a bicycle convoy departing from Anıtpark.

Istanbul action was held at Yoğurtçu Park, located in a central district of the country. People of Istanbul, enjoying a recreational moment in the park, also expressed their support for the action. The action consisted of both a bicycle convoy, decorated with banners and Cuban and Turkish flags and pedestrians, with feelings of solidarity. After the convoy, the action ended with slogans, “No to the blockade! No Más Bloqueo!”

Friends of Cuba met on their bikes at Quarantine Square in İzmir. “End the blockade!” , “Long live Cuba” banners and Cuban and Turkish flags decorated the bikes convoy on the coastal bike path. Friends of Cuba in this third majör city of Turkey also stated that they will continue to stand in solidarity with Cuba forever. 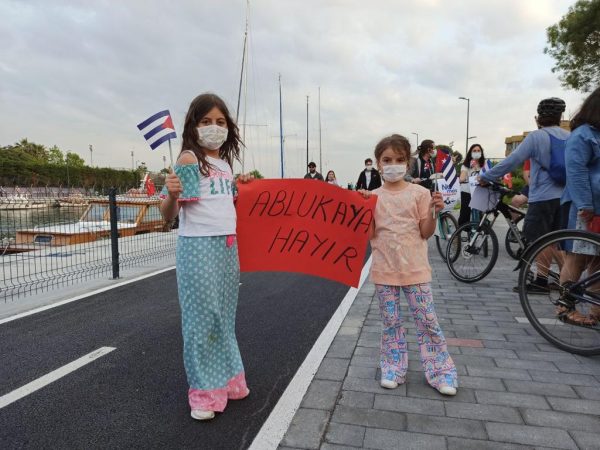 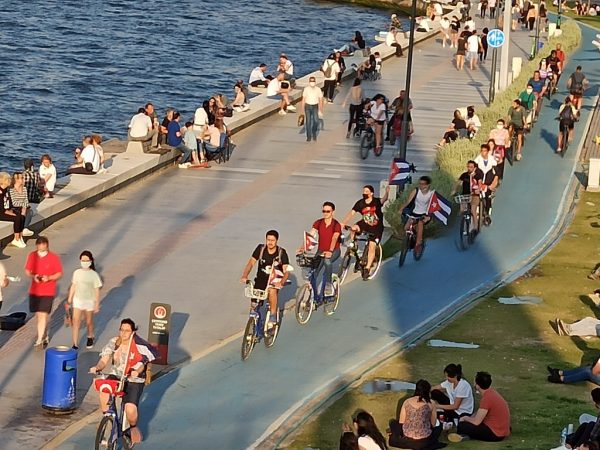 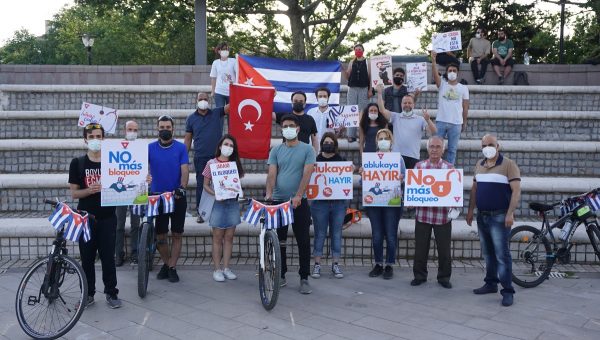 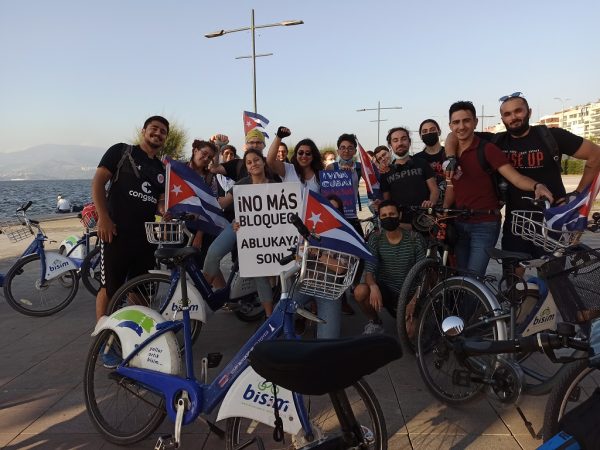