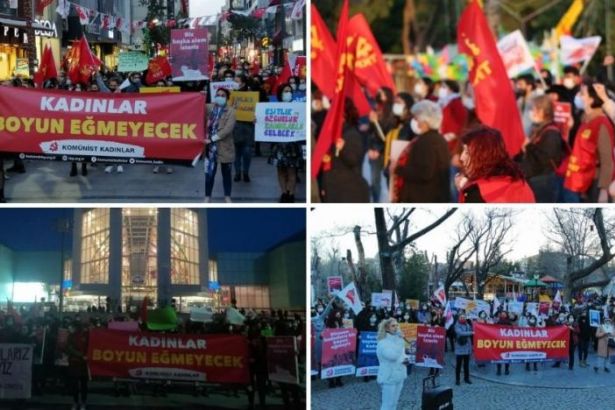 The Communist Women of Turkey, Women’s Solidarity Committees and The Communist Youth of Turkey (TKG) came together in Turkey’s Ankara, İstanbul, İzmir and Antalya to celebrate March 8, The International Working Women’s Day. In the protest carried out with the slogans of “We do not settle for less or the lesser evil! A socialist country will rise in the hands of women,” it was stated that this order could not promise liberation for working women and that women will not surrender to this exploitation and darkness.

In the statements read in the protests held in 5 different locations in Turkey’s İstabul, it was said that “Doubled by Turkey’s ruling AKP’s religionist reactionism, the misogyny of the order in Turkey makes the lives of women unbearable. While violence against women makes our lives unlivable, politicians are shedding crocodile tears without accepting their responsibilities. Security and justice mechanisms do not work, as was the case of violence against women in Turkey’s Samsun the day before March 8. While the state does not take any deterrent measures, violence is encouraged more and more every day with the language of politicians, the media, and the spread of religionist reactionism into the social sphere.”

Emphasizing that to get rid of women's exploitation and to end the violence against women is only possible by throwing this order into the garbage, “We will change this order! We will establish a Socialist Republic where women will live equally, walk the streets freely, and the violence against women will be forgotten. We do not settle for less or the lesser evil! A socialist country will rise in the hands of women,” The Communist Women of Turkey shouted determinedly.

Meeting in Ankara’s Kuğulu Park to celebrate the March 8 Women’s Solidarity Committees talked about how they are coming together and organized against the isolationism policy of the order. They emphasized that they will not stop solidarity and struggle together against reactionism and labour exploitation. “If a Women’s Solidarity Committee has not yet been established around you, gather together and establish one. Then you will see that thousands of women all over the country are with us. We have to take this step for our children, for the future of our youth. Come without hesitation for a minute, come with confidence, come running, we are in a hurry,” they said.

In İzmir, with the call of The Communist Women and Women’s Solidarity Committees, the 8 March meeting was held in İzmir’s Karşıyaka. The Communist Women unfurled a banner reading, “Women will not submit,” and the slogan of “The reactionaries will lose, the women who resist will win” were shouted.

In the speech on behalf of The Communist Women, “There is something we have learned very well in the past 18 years with Turkey’s ruling AKP: If there is reactionism, there are no women!” was said.

Women’s Solidarity Committees also made a speech in the protest. Saying that the burden on women has increased ten times during the pandemic, the current struggles of working women were emphasized. “The childcare is left on us because of the daycare centers that the state has not opened. Because of the nursing homes that the state has not open, the care of the elderly is again on us. Many of our family members have caught COVID-19 because the bosses have not taken the measures in the workplaces to prevent money loss. We, women, are looking after the patients, our spouses, children and siblings, for months who were tested and then sent home. As if that were not enough, in this period, as poverty increases and the cost of living rises, it is still up to us, not the state, to feed those in the house. We spend twice as much time in grocery stores and kitchens. We are the first to face the execution paper that comes to the house and the unaffordable utility bills.”

Women gathered in Antalya at the call of Communist Women, Women’s Solidarity Committees and women from TKG, protesting the exploitation of women’s labor and the denial of their rights. In the speech made on behalf of The Communist Women, it was said that it is the day of women who have nothing to live on but their labour, who have to both study and work, who have to quit their jobs and take care of their children, patients and elderly people, and who are the first to be discarded in every crisis.

In the speech made on behalf of the Women’s Solidarity Committee, it was stated that “We came together with the women in our neighbourhood and established the Bahçelievler Women’s Solidarity Committee. We started workshops for both children and adults in order to stand shoulder to shoulder with the increasing responsibility of child care for women, especially during the pandemic. We continue our painting and chess workshops for children, and we also come together at our enlightenment seminars and meetings on women’s problems. We work to increase solidarity over the usurpation of rights, violence against women and the needs of women. We are inviting all women to our Women’s Solidarity Committees. Long live March 8, long live solidarity!”