TKP announced its electoral bulletin and presented its candidates running in the upcoming local elections in Turkey on March, 31 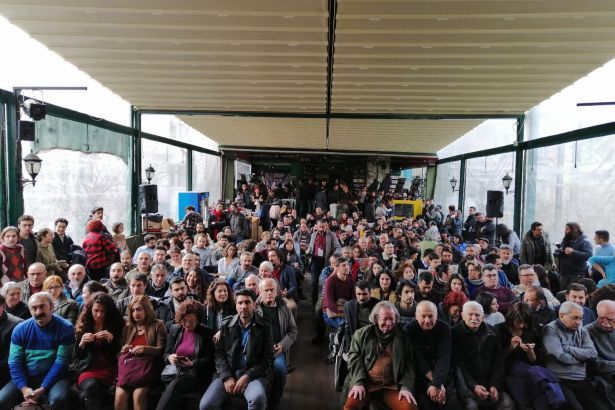 The Communist Party of Turkey (TKP) has announced before that the party will be the one and only political party that truly represents the working people of Turkey in the upcoming local elections on March 31.

TKP will be disseminating the slogans "If money has its reign, working people have their Communist Party" and "We are not in the same boat" during its electoral campaign.

The meeting started with General Secretary Kemal Okuyan's speech on Turkey's general political environment and the strategies of bourgeois parties while the elections are approaching. Stating that the candidates of TKP will be the only options on the voting ballots who will be representing the working people of Turkey, Okuyan said: "Elections are the platforms where the oppressor and the oppressed encounter. We see elections as an extension of class struggle".

"In elections and especially in the local elections of March 31, to make the voice of the working classes of Turkey be heard and strengthened is our responsibility. We will act with this consciousness. We are in these elections, and our boat is not the same with others," Okuyan added.

Stating that there is a seemingly powerful but desperate government in front of the people of Turkey, Okuyan noted that the reason why they look powerful is that working people are not organized.

Referring to the current communist mayor of Ovacık district of Dersim, Fatih Mehmet Maçoğlu, who is also running as a candidate of TKP for Dersim mayorship in the upcoming local elections, Okuyan reminded that there is now an atmosphere that revolutionary municipalities are respected by the people and the task is to increase these examples.

Maçoğlu also stated that "It is very good to work with comrades during the elections and afterward". "Everyone should know very well that we will be governing with the people. Against their rent-seeking minds and individual interests, we will give the power to the local people", he said.

TKP candidates will be running for mayorships of 81 cities and 85 districts in the upcoming local elections.