The US provocation against Cuba was protested by TKP members and friends of Cuba gathering for a press release in front of the US Embassy in Ankara. 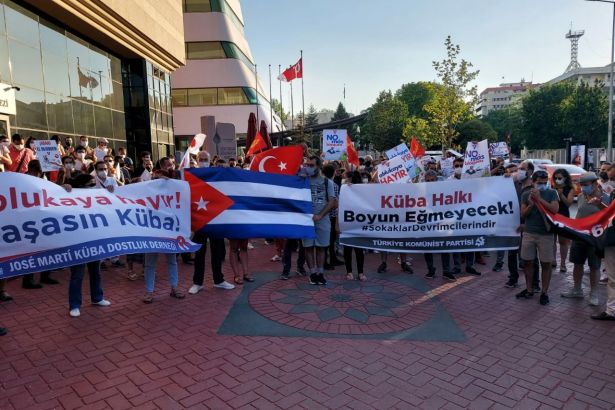 Dozens gathered outside the Embassy of the United States in the Turkish capital Ankara this Monday to condemn the destabilizing actions against Cuba, and to demand the US blockade against Cuba be lifted immediately. The mobilization took part upon the joint call of Cuba -Turkey Friendship Association ‘José Martí’ (JMKDD) and The Communist Party of Turkey (TKP).

Oğuzhan Üzel, who spoke on behalf of The Communist Party of Turkey, reiterated that the blockade is employed by the USA as a means to hinder the development of Cuba, and is the main cause of all major problems the island is facing today. “It is such a dishonourable aggression that, even the COVID-19 pandemic which shook the whole world was seen by the US government as an apportunity to wreak havoc on Cuba. No surprise this aggressive policy came from the same government who neglected its own people during the pandemic and continued warmongering across the globe”, he said. Üzel affirmed that the US imperialism has put into play several different methods to defeat Cuban socialism, and that it has failed every time in the face of the unified and organized Cuban people. He said: “Our duty is to strengthen the struggle for socialism in Turkey so as to prove the Cuban people that they are not alone in their fight against imperialism.”

On behalf of the Association, which is the largest organization that represents the friends of Cuba in Turkey, Göksun Özhan made the press release, saying that protests took place in Cuba due to the highest-ever number of new daily COVID-19 cases and deaths in the island, as well as local blackouts and other economic hardships mainly caused by the US blockade. “Although it is the only nation in Latin America which could develop its own vaccines against COVID-19, Cuba is having difficulty producing and administering the vaccine swiftly due to the economic impact of the US blockade”, she continued. Özhan emphasized that the enemies of Cuba want to take advantage of this situation, provoking internal disturbance and said: “Hands off Cuba! The Cuban people knows how to handle their own problems. They will not surrender their willpower to anyone. The only way to provide humanitarian support to Cuba is to end the genocidal blockade immediately.”