Forests are unprotected in face of AKP's irrational policies

Environment Bureau of the Communist Party of Turkey (TKP) announced its preliminary assessment of the fires, declaring "Our forests are unprotected in the face of the irrational and anti-planning market policies of the AKP." 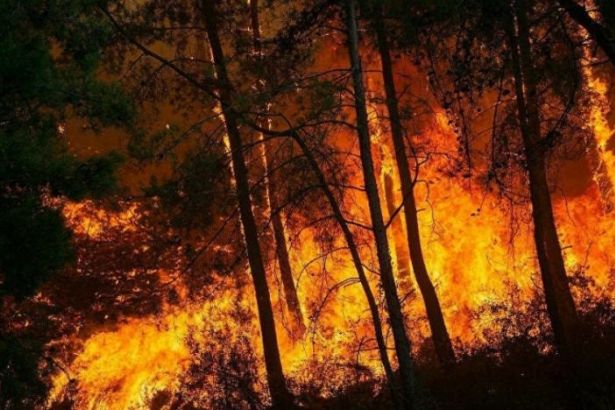 A preliminary assessment came from the TKP Environment Bureau regarding the forest fires that continue in many parts of the country and could not be brought under control due to inadequate interventions.

The main reason why our forests are burnt down so easily lies in the fact that the state has almost completely withdrawn from the responsibility of protecting forests and our forests, like all the natural wealth of the country, have been surrendered to the unbridled profit greed of capitalism, the Bureau says.

The full text of the TKP Environment Bureau's preliminary assessment is as follows:

Our forests are unprotected against the AKP's irrational and market policies that are hostile to planning.

Turkey's forests are open to fire at any time of the year. The AKP's market-oriented practices towards natural areas have a share in this as much as global warming. With a series of changes made in the forest law during the AKP rule, the protected areas, national parks, conservation areas, and the country's forests as a whole were opened to the unlimited plunder of the capital class. As the natural cause of the established plunder system, deforestation has become almost the main cause of floods and forest fires in our country.

- In 2002, when AKP came to power, the wood production obtained from forests was 8 million cubic meters, according to the end of 2020 official data, it has exceeded the level of 25 million cubic meters. And it is estimated that it will exceed 30 million cubic meters by the end of 2021. As a result of the fluctuation in the dollar exchange rate in recent years, these high levels have been reached with the import-based forest industry turning to the domestic market. Deforestation due to high wood production causes floods and landslides in different parts of our country, and soil fertility decreases with high erosion.

- According to official figures, as of the end of 2020, 47 thousand hectares of forest area was allocated to mining, and 34 thousand hectares of forest area was allocated to the capital in the energy sector due to WPP (Wind Power Plants) HEPP (Hydro-Electric Power Plants), nuclear power plant, oil exploration reasons. With these permissions, irreparable damage is done to nature. For instance; The forests destroyed in the construction of the Yavuz Sultan Selim Bridge and İstanbul's third airport, the tree massacre carried out by the Alamos Gold Company in the Kaz Mountains, and all these practices, of which we can give many more examples, have caused irreparable damage in the forest ecosystem. Finally, with the law that came into force after being published in the Official Gazette at the end of July, the opening of forest lands to tourism investors under the name of Tourism Protection and Development Zones has come to the fore. Since the ownership of these forest areas, which are offered to the capital's service, is in the General Directorate of Forestry as per the law, these forest massacres are not reflected in the national forest asset statistics. With the destruction of the forest areas allocated to the capital, much more forest area is destroyed than the amount devastated by forest fires.

- The period between 1 May and 1 November is called the fire season, and all firefighting planning, from the recruitment of seasonal firefighting workers to the aircraft and helicopter rental contract, covers these dates. However, with the effect of climate change, forest fires spread to four seasons, so the plans made limited to these dates without taking into account the effects of climate change are incomplete and inaccurate.

- Reducing the number of forest workers as a result of privatization policies in recent years makes it difficult to fight fires effectively, and making workers work overtime also creates a basis for occupational accidents. On the other hand, the shortage of fire workers is tried to be met by hiring seasonal workers. In addition to vocational training, these workers are not provided with decent housing and nutrition.

- Approaches such as "We Will Grow Again" and "We Are the Followers of the fate of Saplings" initiated by non-governmental organizations, which are well-intentioned but contain dangers in terms of ecosystem restoration, are far from a scientific approach and a central planning understanding that should be. The preservation of the country's forests and the expansion of forest areas should be one of the primary responsibility areas of the state and this should be implemented within a central plan. Our people, who try to protect their forests today, must first demand that the AKP government fulfill this responsibility. The destruction caused by the AKP government, which plundered the country's natural resources, and our forests are far above the dimensions that can be compensated by planting new seedlings.

- Fighting forest fires is in the nature of homeland defense and only an organized society can be successful in this fight. Neither the ministries nor their affiliates have any socialist approach and policy regarding this issue.

- The main reason for the destruction of our forests by burning so easily is that the state has almost completely withdrawn from the responsibility of protecting forests, and our forests like all the natural wealth of the country, have been surrendered to the unbridled profit greed of capitalism. The threats and problems we face today have become irrefutable. We have no chance to protect our forests or natural riches without putting an end to this market-based exploitation system, which is also encountered in forest fires. The necessary measures for the protection of our forests should be implemented with central planning in the light of science, the social organization necessary to combat forest fires should be established and sustained, and the professional competence and secure employment policies for forest workers should be ensured.