Turkey's Solidarity Assembly made a statement regarding the recent developments in Turkey and the world particularly after Taliban seized power in Afghanistan, calling for a struggle against imperialism. 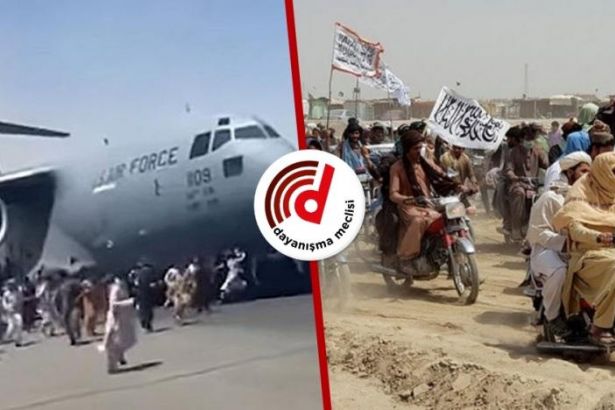 After the Taliban seized almost all of Afghanistan, including its capital, the fate of the country began to be discussed around the world. Making a statement on this issue, the Solidarity Assembly called for a fight against imperialism in its statement.

In the statement, "Where the hand of imperialism touches, there is Afghanistan, Syria, Iraq, and Turkey. The only thing it pledges to the world is pitch darkness, unlimited poverty, and exploitation" it was said.

The following comments were made in the statement:

"In wide geography, including Turkey, new problems arise, each arising from the capitalist-imperialist system, and new moves are being made one after another. It is claimed that a significant part of these moves was made for religious reasons and that religion has been a decisive and useful ideological element since the intervention of imperialism in the region and turning it into an ideological argument, once again shows how problematic religion-based anti-imperialism is.

The fires and floods that emerged under the severe epidemic conditions in our country and that the AKP government had difficulty in managing are in a way related to the developments in the region. The AKP, which is trying to play a role in the game of great powers in pursuit of imperialist ambitions, is also trying to build a regime with a high religious tone inside. The fact that the president has 11 luxury planes but the state does not have a single plane to extinguish fire is closely related to this mission of the AKP. We are faced with a government that has great imperialist ambitions but has difficulties in governing its country.

The developments in Afghanistan are one of the last moves of the capitalist-imperialist system. While this unfortunate country was finally left to the mercy of the Taliban by the invading forces, the AKP government is still trying to play a role in the vacuum created by the change in power by assuming the protection of the airport through the Taliban. Meanwhile, the Afghan army, who is pro-US or waiting for their turn to immigrate to the USA, does not neglect to embrace the surplus refugees.

The Taliban, which seems to have been thrown into the region from the Middle Ages, took over the administration of the country completely, with the help of the USA and the approval of many powers that had planned on the country.

The US also hoped that the "Taliban Emirate" rising above the debris it left behind would pose a new threat to China and Russia. Russia and China, on the other hand, have started to take countermeasures for a long time and have already started official talks with the Taliban. All three countries had plans for Afghanistan.

The US wanted to get rid of its burdens by leaving the country under the control of the Taliban. Russia was worried that the developments in the country would cause problems beyond its borders. China has been investing in the region since 2016, showing that it will not say no to a power that will ensure the security of its investments.

It had improved its relations to the extent that it received the service of protecting its investments and technical personnel operating in Lagor province from the Taliban. He also perceived the risk of the US inciting a sharia/separatist uprising in Xinjiang through the Taliban as a worrying problem.

The instability in the region had the potential to harm the political-military goals, economy, and energy projects of these three countries in the region. In the end, they found a single interlocutor ready to stabilize and negotiate

'A misogynist, murderous organization as an official state...'

On the other hand, Taliban officials give more importance to diplomatic contacts compared to the past, and they want to be accepted as a legitimate political force, not as a "terrorist organization".

Although it does not match with their first "actions", the first messages they gave after taking over the administration in Kabul confirm this. It is obvious that the "real politics" axis that he wants to shift in foreign policy is also considered as a counterweight not to interfere with the sharia extremists in domestic politics.

The danger of a misogynist criminal organization appearing on the world stage as an official state and encouraging all other religious bigots in our country and around the world may be greater than is thought.

The USA withdrew and handed over its mission in the country to the Taliban. The shift of the center of the global power struggle from the Middle East field to the Indo-Pacific field also plays a role behind this move. Imperialism once again places Afghanistan in regional and global rivalries through various geostrategic interests and conflicts for influence in the search for resources.

Meanwhile, many signs have emerged that the presence of imperialist powers in the country has nothing to do with the interests and expectations of the people of Afghanistan. For example, Germany, which has the second-largest military force in Afghanistan after the USA, carried only 7 people on the first plane returning to the country.

Others, large and small, boarded their planes and returned to their countries, leaving their colleagues at the mercy of the Taliban. At that time, Afghans, who wanted to escape from the brutality of the Taliban, were trying to escape by hugging the landing gear of the planes."

The only thing that this scuffle promises the people of Afghanistan is the ongoing deep poverty, the darkness of the Middle Ages, and the brutality of the Taliban.

Where imperialism has touched, there is Afghanistan, Syria, Iraq, and Turkey. It is trying to besiege and strangle any place it can't reach, Cuba and all the countries that come out of its direct control, especially the Latin American countries that it considers its backyard. All it promises the world is pitch darkness, boundless poverty, and exploitation.