Communist Party of Turkey held a mass meeting today in the capital city of Ankara. Thousands chanted slogans for socialism against fascism and the rule of capitalist exploitation. 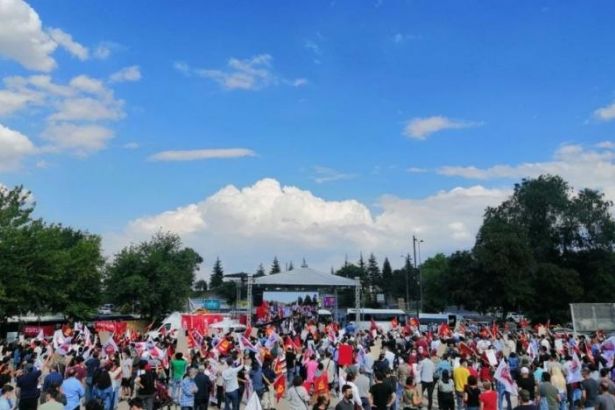 The Communist Party of Turkey (TKP) held a mass meeting today in the Turkish capital city of Ankara under the slogan, “We will tear this darkness apart” to protest the darkness the people were dragged to and to voice their demands against the tyranny of bosses, sects, and mafia.

The meeting started with a mini concert of Gülcan Altan, a TKP-friend musician.

“We have been talking about the darkness our country has experienced for decades, we are all trying to live in this darkness. We are all trying to survive in this social order based on the exploitation of labour. Our country is under a severe attack, AKP [ruling party] has dragged Turkey to a great darkness and decay. The workers are struggling against extreme poverty,” İnam said.

İnam underlined that she took the stage in order to be the voice of the women who do not bow down but struggle against the dark social order. “We know that a social order where women will not be killed is possible … We will win, we will absolutely win!” she said.

Kural noted that the bosses and the rule of AKP have plundered the workers’ funds in order to create new resources in favour of capital particularly during the pandemic. “The working class is strong; it destroys palaces and topples dictators. It is the one who will put an end to the exploitation and reactionism,” he concluded.

Mert Doğan from the Communist Youth of Turkey (TKG) delivered a speech after Kural. “I am here to convey the message of the youth,” Doğan said, adding that they are not just voters as the ruling party or pro-establishment opposition parties regard them, but they are the youth struggling for their future.

Doğan noted that TKP will build the future and hope around the country, referring to the new workers’ houses, district houses and organizational offices from İstanbul to the very east of the country.

Levent Üzümcü, a famous theatre artist, greeted the people at the meeting, calling for the struggle for socialism around the country.

KEMAL OKUYAN: THERE IS NO CLEAN CAPITAL

Referring to the arrested assailant, Onur Gencer, Okuyan said,  “Onur Gencer is a murderer. He is an organized murderer, not an insane figure,” noting that this bloody assault came after the ruling forces’ motivations for hate crimes in the name of religion and nationalism.

Okuyan underlined that there can be no ”clean capital” in this social order, adding that the people must immediately get organized instead of searching for some ”clean bosses”.

”We do not want foreign military bases in this country. The bases in our country will be closed sooner or later. They will go away from the İncirlik Base,” Okuyan said, referring to the foreign policies of Turkey, adding that if we do not want any foreign military forces in Turkey, then the Turkish troops should not be deployed in other countries such as Syria and Libya.

Okuyan also reminded the ”fair political principles of TKP”. ”These are our principles; religion in politics is out, the bosses are out, the imperialists are out!” he said.