The court decision regarding the Soma Mine Massacre case met with reactions and protests by the bereaved relatives of the killed miners, their lawyers, and pro-labor progressive groups intervening in the case. 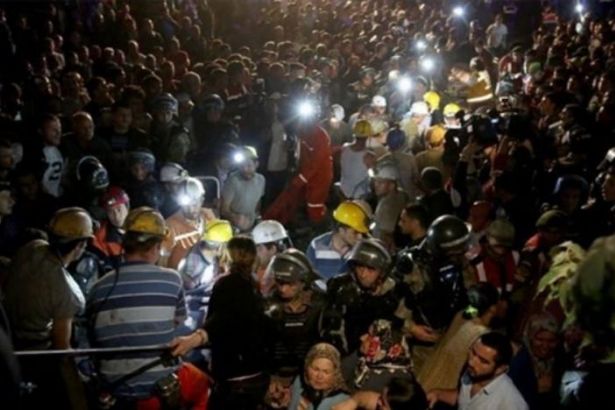 Since the “Soma massacre”, a catastrophic mine accident in Eynez coal pit in Soma, western Turkey, seven years have passed. The coal mine was run by Soma Coal Enterprises Inc. based on a royalty agreement with the state. Being one of the largest fatal workplace accidents in history, the incident took place on May 13, 2014, leaving 301 dead and 162 injured behind.

7 years in prison for causing 301 deaths

After six years long proceeding with a trial and retrial, the court declared its decision last week, sentencing the Board Chair Can Gürkan to 20 years in prison for “causing death by culpable negligence.” Considering the 5 years and 6 months he had spent in prison and the provisions of the Turkish Criminal Procedure Law; the sentence means another one and a half years in prison at most.

Protests made by bereaved families and progressive groups

The court decision was met with reactions and protests by the bereaved relatives of the killed miners, their lawyers, and pro-labor progressive groups intervening in the case.

One of the spokespeople of lawyers, Nergis Tuba Aslan from the Progressive Lawyers Association (ÇHD), stated:

“Seven-year has passed since the massacre, and we have witnessed all sorts of vileness. For seven years these families have been chasing after justice with a bitter struggle. All the public servants and statesmen who backed the capitalists in this trial shall be called to account one day. We will not give up. After the worst worker massacre in Turkey, all we want is no other worker to die due to being crushed between the gears of this corrupt system. By this decision, they meant to affirm massacring of other workers in the future.”

The ÇHD, a lawyers’ association focusing on the defense of the right to life and human dignity has been one of the major intervening parties in the Soma case. In a press release, the ÇHD renounced the court decree, describing it as “a reward.”

In an interview with soL, İsmail Çolak, a father who lost his son to the Soma massacre and the president of the Soma 301 Miners Association described the court decision as the outcome of “an unjust trial process.” Highlighting the clientelist relations between the AKP government and the corporation, Çolak stated:

“We have raised our voices, saying that this was an unjust trial. Because public inspectors compiled reports without even entering the coal pit, stating that it was the most productive and safe mine in the country two months before the massacre. They were hosted by the company in five-star hotels, receiving cheques. We demanded these inspectors be tried as well but it was overruled. The accountable bureaucrats were always protected. This coal pit was under the jurisdiction of the Ministry of Energy. But no one from the Ministry or the relevant institutions were tried.”

Accusing the government of pressurizing the court, Çolak told:

“The justice belongs to the rich, the capital owner, the powerful. We have gone through an ordeal here with more than eighty hearings. They have intervened in the trial process by changing the court board several times.”

Following the announcement of the decision, the Communist Party of Turkey (TKP) also published a statement:

“This court decision means that the capitalist establishment confessed its responsibility for the Soma massacre. They will not get away with it!”

Since the Soma massacre, the TKP has published several statements, underscoring that the “massacre” was the consequence of the established relations of production relying on profit-seeking.

The TKP has been calling workers to action, emphasizing that workplace injuries and fatalities are inevitable unless the establishment is ousted.

A chronology of critical events

On May 13, 2014, a fire broke out in one of the underground coal pits in Soma, a mining town in western Turkey. The mine was run by Soma Coal Enterprises Inc. on behalf of the state. Continuing for two days, the fire marked one of the largest mine disasters in the history of the country, leaving 301 dead and 162 injured workers behind.

Soma basin had been a center of the coal industry for decades. Although the neo-liberalization of the energy industry had been in progress since the 1990s, the rise of the Justice and Development Party (AKP) to power in 2002 meant a radical transformation of the relations of production in the region.

The AKP built a particular extractivist regime that involved the expansion of underground mining zones, privatization, the establishment of a de facto subcontracting system with premiums, and granting of royalties to the mining corporations, which meant purchase guarantees with no production cap. With the compliance of the local branches of the company union (Maden-İş) and lax inspection practices by the state institutions, such incentives to the capital led to a dramatic rise in production facilitated by production pressure on miners and at the expense of work safety measures.

Following the incident, several reports have been published by Boğaziçi University, the Union of Chambers of Turkish Engineers and Architects, and the Turkish Social Sciences Association. The reports highlighted that there were strong signs of risk before the incident due to increased production and lack of necessary safety precautions. According to the reports, the corporation refrained from taking any notable measures despite the warnings that had been vocalized for a few months before the incident. The reports also showed clientelist relationships between the AKP government and the corporation.

In the aftermath of the incident, pro-labor progressive and revolutionary groups, including the Communist Party of Turkey, declared the incident a “massacre” to highlight the systemic causes behind the catastrophe, the preventability of losses, and the accountability of the government and the company.

The Soma trial began eleven months after the massacre, on April 13, 2015. There were 45 defendants. Hundreds of bereaved families and surviving miners joined the case as plaintiffs, who were represented by several progressive lawyer associations.

The court expert reports and testimonies attested to increased production without taking the required safety measures and deliberate refrainment from setting up a ventilation system despite the high risk of fire. Based on such evidence, the intervening lawyers claimed some of the executives including the Board Chair Can Gürkan, the General Director Ramazan Doğru, Deputy Operations Manager İsmail Adalı, Operations Manager Akın Çelik, and mining engineer Ertan Ersoy to be sentenced for “causing deaths by probable intent” for 301 miners and “causing injury by probable intent” for the injured miners. This would mean the prison time to be calculated for each killed and injured miner separately, adding up to hundreds of years.

Throughout the three-years long trial, the AKP government intervened in the case by various legal and extra-legal means. On July 4, 2017, one week before the anticipated court decision, the chief judge Aytaç Ballı was reassigned to another office. On November 13, 2017, Selçuk Kozağaçlı, the ÇHD President and a leading lawyer of the Soma case, was arrested based on the charges of “membership to a terrorist organization.”

The trial ended on July 11, 2018. The court sentenced the Board Chair Can Gürkan to 15 years in prison for “causing death by negligence” while giving other accountable executives from 15 years to 22 years and 6 months in prison for “causing death by culpable negligence. Thirty-seven defendants were acquitted. Among them was Alp Gürkan, founder and owner of the company, and father of the Board Chair Can Gürkan.

Based on the Turkish Criminal Procedure Law, this would amount to 6 days in prison per killed miner. The decision was met with protests by plaintiffs, their lawyers, and progressive groups and parties.

On April 19, 2019, İzmir Regional Court of Justice, the regional high court, approved the prison sentences for the five defendants. By the same decision, Gürkan was released from prison.

On September 30, 2020, The Court of Cassation reversed the decision of the regional courts. It decided for a retrial, stating that Gürkan, Doğru, Çelik, and Adalı should be sentenced for killing by “probable intent” 301 and “causing injury by probable intent” 261 times.

On February 5, 2021, the remaining arrested defendants of the case were released from prison.

On June 16, 2021, the local court declared its decision, sentencing Can Gürkan 20 years in prison for “causing death by culpable negligence.”