Turkey's “busiest" cocaine route: What do we know, what are they hiding?

In the last month, the news of the third cocaine shipment, the destination of whichis Mersin Port, became the main topic of conversation. While the AKP government is conducting operations for the first time in an environment where debates flare up, it also conceals information. 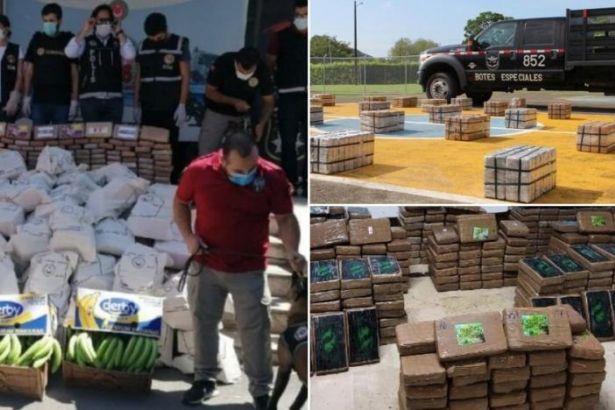 "The Colombian police seized about five tons of cocaine to be sent to Turkey. The Colombian Defense Minister announced that the value of the cocaine seized was $265 million.”

After this news came to the agenda last June, the issue became the subject of discussion, but the Justice and Development Party (AKP) government did not make any detailed statements about this giant shipment.

Then the nationalist mafia Sedat Peker stepped in claiming that cocaine was traded from many points in Turkey, especially in Yalıkavak Marina, and that Mehmet Ağar, as well as other names from the government, were responsible for this business by pointing to Süleyman Soylu’s and Binali Yıldırım’s sons.

While these discussions were going on, a new route has emerged. There have been three remarkable pieces of news on this route so far.

The common points of these three news stories are that they contain large quantities of cocaine packages from Ecuador to Mersin, they are all stored in banana containers, one of them was caught in Panama before they arrived, and two of them were "caught" by the Ministry of Commerce at a time when the debate in Turkey was very heated.

• May 7, 2021: In Panama, 616 packages of cocaine were seized in a container whose last stop was Mersin Port. Yılport operates the Port of Bolivar in Ecuador, where the container comes from.

Not sharing information, other than "the amount of product seized" after these operations are being criticized by the public. However, there is some information out there.

One source of this information is the Governor of Mersin’s statement:

“After receiving the notice that there was a narcotic substance in a container loaded with Bananas on a ship coming to Mersin Port from Ecuador; in the operational work carried out in coordination with the Provincial Police Department and the Customs Enforcement Directorate, A Ton of Cocaine was seized (1,000 packages) in the container in question, and the counting and searches are continuing. The investigation continues in many ways.”

In other words, the address from which the cocaine departed is Ecuador, just like the delivery caught in Panama in May. The port is the port of Yüksel Yıldırım, who is also the chairman of Samsunspor.

According to Timur Soykan's article on the subject, 1.3 tons of cocaine was found among the banana parcels sent from Ecuador by the Slovenian-based food company “Derby". Again, according to the claim in Soykan's article, Özşimşekler Food Company in Mersin appears as the buyer company in the bill of lading of the captured ship. Soykan continues; "The company, whose address is listed as Mersin Free Zone, is not picking up its phones. The young boss of the company, Halil İbrahim Ş., appears to be posing by the pool in Ecuador on his social media account. He also has posts about 'Derby' brand bananas on his social media account. I could not get a response from Halil İbrahim Ş., whom I tried to contact through his media account. We do not know whether he is among the five suspects in custody.”

In the last operation carried out today, about half a ton of cocaine was found in a container loaded with bananas. It doesn't seem like it would be too surprising to see similar addresses again.

In other words, it is noteworthy that cocaine is tried to be smuggled through the same route, with the same method, one week apart. Another remarkable aspect of the work is the question of how many transfers this route has hosted so far that were not subject to “apprehension".

Questions are unanswered, Soylu is nowhere to be found

After the operations, the Ministry did not clearly disclose any important information such as the owners, senders, and delivery addresses of the ships that were the subject of the operation.

While the silence under the light of these questions draws attention, the fact that Interior Minister Soylu, who constantly makes statements about drug operations, is excluded from these two operations stands out as another striking factor.