TKP: Cuban people will not surrender!

The Communist Party of Turkey (TKP) has made a statement supporting the Cuban people and revolutionaries against the recent US provocations. 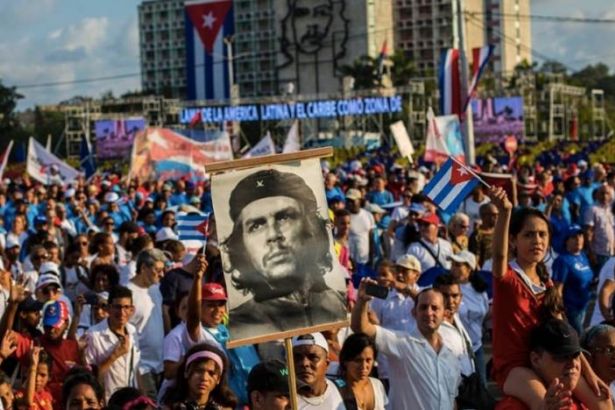 The Communist Party of Turkey made a statement regarding the US provocation in Cuba. In the statement TKP emphasized that imperialism continues to attack the revolutionary Cuban people and underlined that the reason for all the difficulties experienced by the Cuban people is the inhuman blockade that has lasted for half a century.

Although the USA, which has made dozens of attempts to destroy socialism in Cuba since the revolution, has started another provocation, the response of the people was quick.

The full statement of TKP is as follows:

Streets belong to revolutionaries!
People of Cuba will not surrender!

Yesterday's events in Cuba prove that imperialism will not stop troubling Cuba's revolutionary people. The struggle between two classes, the workers and the bourgeoisie, whose interests can only conflict with each other, manifested once again in the form of counter-revolutionary provocation, which started on the streets of Cuba. The attitudes towards Cuba proved, once again, the true colors of all parties concerned.

First of all, it must be underlined that the hardship and shortages experienced by the people of Cuba for years are but a direct result of the US blockade. Imperialism cannot stomach the pure fact that a small island, a small country, has been challenging the imperialists for more than sixty years. Each time, the imperialists try new means to suppress the people of Cuba.

This time the imperialists tried the dirtiest of offenses and tried to take advantage of the COVID-19 pandemic seeking a way to pressure Cuba even more in these difficult times. Behind all these efforts is the US government. Not being able to protect its nation against the spread of the virus for this past year and a half, the US government simply watched thousands upon thousands of its people die from a disease that is, in fact, preventable. Instead, they focused on calling for wars and bloodshed all around the world.

As soon as the protests started in some areas of Cuba yesterday, the fiercest enemies of Cuba tried to manipulate the international public opinion and unsettle the Cubans by spreading false and misleading messages on social media. Taking advantage of these lies, the counter-revolutionaries tried to justify intervention in Cuba.

However, they will not succeed because Cubans have awareness against these conspiracies of the US greater than anyone. These revolutionary people know both their friends and their enemies very well. No Cuban will ever allow the revolution to fail! We have full confidence that Fidel's daughters and sons will thwart this conspiracy with determination and organization. As friends and comrades of Cuba, we will also do our part, and we will not allow anyone to defame Cuba on unfair accusations.

Imperialism will not defeat Cuba. As Miguel Diaz-Canel, President of the Socialist Republic of Cuba, said, "The streets belong to the revolutionaries" and will remain so!