Ekin Sönmez: "We will remember the Victory Day"

Ekin Sönmez, a member of the Central Committee of the Communist Party of Turkey, shared her views on the issues of historical memory of the Second World War and the Victory Day, for an interview made by Yuri Lobunov. 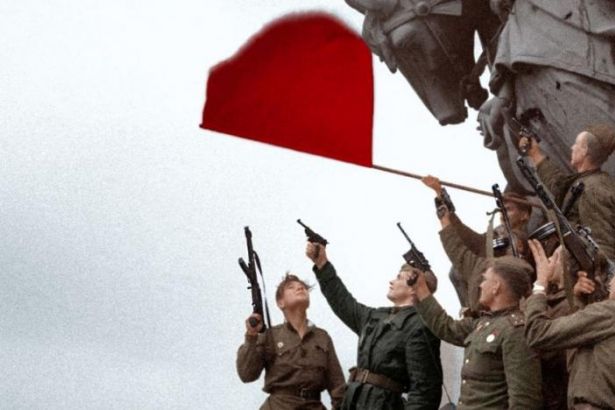 Yuri Lobunov interviewed Ekin Sönmez, Central Committee member of the Communist Party of Turkey, on the historical memory of the Second World War and Victory Day. Sönmez argued that we must not allow the days that occupy an important place in the collective consciousness of the history of the working class to be misrepresented or ignored.

In Europe, and all over the world, people remember the Second World War less and less. Young people are completely unaware of the events of those years. Isn't such forgetfulness dangerous?

I do not agree. The Second World War continues to be one of the most interesting topics for young people, luckily for us, it is.

There are many documentaries about World War II made by the BBC, History Channel, or other Western channels. Computer games, movies, and TV series also often use this theme. Young people, especially because the hegemonic language of imperialist culture is English, draw their knowledge from sources like these. These sources, on the one hand, use false terminology (for example, they often say "Russian" instead of "Soviet," "Russia" instead of "USSR"). On the other hand, by concealing specific circumstances, they distort historical facts and show the USSR as a state of tyranny. Although these works look objective, they are not unbiased.

We must remember that the Soviet Union, at the cost of the lives of 27 million of its citizens, saved the world from fascism, and did this to a large extent alone with the enemy. From the moment Hitler's Germany attacked the USSR in 1941, the war ceased to be an imperialist war of competition and became a war between two systems, two worldviews, a war between opponents of exploitation and exploiters. The struggle of the peoples against fascism became an integral part of the struggle of the working class. Workers of all countries have the right and the duty to study the victory that was given to them.

Victory Day is the day Soviet soldiers hoisted the red banner with the hammer and sickle over the citadel of fascism, a day symbolizing the collective feat of millions of women and men. It is celebrated in the European Union as Europe Day, which is another distortion.

However, not everyone remembers it. In Europe, a "fashion" for other assessments arose. How should we relate to this?

When monuments to the heroes of the war are destroyed, when the names of the streets given in honor of these heroes are renamed, it becomes an attempt to erase their names from the common memory. The birthdays of the leaders of fascist gangs are celebrated in Ukraine, Czechia, and other Eastern European countries. Politicians who declare themselves followers of the Nazi ideology, in whose offices there are portraits of Nazi leaders, are allowed to take seats in parliaments. All those must be considered a crime, and these politicians must be punished.

But this is not happening yet. Perhaps there are reasons for this?

What is happening cannot be taken independently of the crisis of capitalism, of the fact that capitalism needs more violent measures to exploit more profoundly. As a consequence, fascist tendencies are intensifying. Those who work to change historical memory are trying to create a foothold for themselves in history, to show everyone their missing roots, to write their own history. Their attempts were, are, and will be in vain. In the end, they will witness that the people will not accept these "idols", the "new heroes" who were created by the hands of imperialists and their corrupt agents. However, we cannot deny that these figures occupy a place in today's world of thought.

Today, Western imperialism, including the European Union, distorts the history of the USSR and uses this distorted history as a means to fight against Russia. Those who have been convicted and sentenced by the court of history are exonerated, while Russia is punished for the "sins" of her ancestor.

Why were the events of World War II chosen as the target of disinformation attacks?

Today, the great threat to the ruling class is the millions of people who want to change the social order and who are embracing the idea of communism. European big business and the politicians who serve it are eager to slow the spread of this idea in any way they can. They are trying to equate totalitarianism with communism; communism… an idea that is the real liberation for humanity, one that will unleash and liberate the full creative potential of workers.

In some Eastern European countries, it is forbidden to found communist parties, in other countries those parties that continue to operate are under the threat of being closed and banned. You may ask why, what harm are these organizations doing? The answer is simple, it is the hypocrisy of European democracy. If this hypocrisy is not exposed today, then tomorrow it will turn to other progressive ideas, to other aspects “unnecessary” for capitalists, to defenders of women's rights and peace activists, and so forth.

In Europe, Victory Day over Fascism is being more and more modestly commemorated. Is it necessary to try to change this trend?

We cannot interfere with how others celebrate Victory Day. This day is not in the monopoly of a single country, it is worldwide, it belongs to the entire working class, which fought against fascism. However, Victory Day is worth celebrating not with parades of capitalist armies, but celebrating only under a socialist system.

The days that occupy an important place in the collective consciousness of the history of the working class - Victory Day, May 1, March 8 - should, under any conditions, be remembered. We must not allow these days to be misrepresented or ignored.

Now the pandemic has become an obstacle to our meetings, actions, and seminars. But we must not forget that the pandemic that has lasted for more than a year is a consequence of capitalism, or, in other words, a consequence of the absence of socialism. One of the reasons for the millions of victims of the pandemic today is that the social system that triumphantly destroyed the fascist monster 76 years ago could not save itself.

Of course, we will celebrate Victory Day, it gives one more reason to talk more about socialism, fight for it and, in the end, build it.

The original interview can be found at: https://ruskline.ru/opp/2021/05/08/kommunisty_turcii_i_pakistana_o_dne_p...