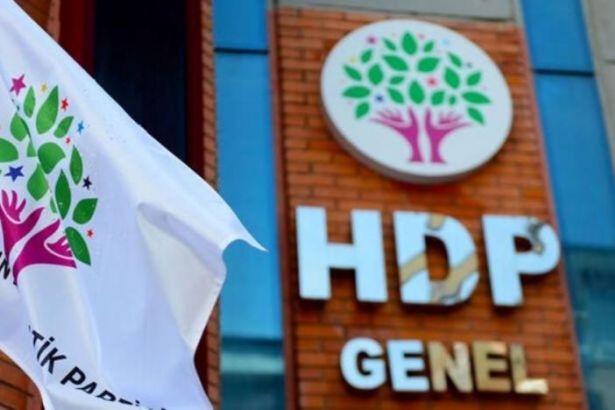 On Wednesday, the indictment was sent to the Supreme Court.

In the indictment, it was stated that "HDP members aimed to destroy the indivisible unity of the state with the nation, by their statements and actions".

Şahin stated the following in his written statement:

"In paragraph 6 of Article 69 of the Constitution and Article 103 of the Law on Political Parties, it was stated that a political party will be permanently shut down for their acts contrary to the provisions of paragraph 4 of Article 68 of the Constitution. In the extention of the article, it was stated that if acts of this nature have been heavily committed by the party members and this status was approved and adopted implicitly or explicitly by the party organs, the Constitutional Court determines that the party became the focal point of such deeds.

After the decision, HDP Central Executive Board convened extraordinarily.

The Supreme Court of Appeals Chief Public Prosecutor Şahin, who filed a closure case against the HDP, was appointed by President Erdoğan of the ruling AKP.

The first details of the indictment disclosed: More than 600 HDP members were asked for a political ban

According to the indictment of the case filed for the closure of HDP, more than 600 HDP members, including Demirtaş, were demanded a political ban.

The details of the indictment have been revealed after Bekir Şahin, Chief Public Prosecutor of the Supreme Court of Appeals, filed a lawsuit at the Constitutional Court (AYM) for the HDP to be closed.

According to the news in Habertürk, the indictment prepared by the Chief Prosecutor consists of more than 600 pages. A political ban is being demanded for more than 600 HDP members, including HDP Co-Chairs Pervin Buldan and Mithat Sancar, and former co-chairs Figen Yüksekdağ and Selahattin Demirtaş.

In the indictment of the Chief Prosecutor's Office, it is also demanded that the treasury aid be cut and the party's assets be put under preliminary injuction.

After the application for HDP's closure, it became clear how the process will take place. Accordingly, the Constitutional Court Committee consisting of 15 people will decide on the closure case.

After the Supreme Court of Appeals Chief Public Prosecutor Bekir Şahin filed a lawsuit at the Constitutional Court (AYM) with the request of the HDP to be closed, it is being discussed how the process will proceed.

The closure of political parties is decided by the Constitutional Court (AYM), based on the lawsuit to be opened by the Supreme Court Chief Public Prosecutor. Instead of "permanent closure", the AYM may decide to deprive the political party concerned partially or completely from state aid, depending on the severity of the actions in question.

Upon a lawsuit, the Court can decide on the dissolution of a political party due to the circumstances enumerated in Article 69 of the Constitution, or the partial or complete deprivation of state aid, depending on the severity of the actions in question, with the majority of two-thirds of the court members attending the meeting, that is, with the votes of 10 of the 15 members.

Cases related to the closure of political parties are examined by the General Assembly over the file and finalized by applying the provisions of the Code of Criminal Procedure No.5271 in accordance with the nature of the case.

Nationalist Movement Party (MHP) Chair Devlet Bahçeli, an ally of the government, has been insistently calling for the closure of the party over the past few months.

Bahçeli has reiterated his call for the closure of the Peoples' Democratic Party (HDP), which he accuses of being engaged in "terrorism."

He urged the Court of Cassation, the top appeals court in the country, and the Constitutional Court, to take action against HDP.

"We expect the Court of Cassation Chief Public Prosecutor's Office to open an investigation into HDP," he told his party's parliamentary group.

"If the Constitutional Court determines, with evidence and documents, that HDP is the focus of terrorist acts, which is the only option, it won't be possible to talk about a party called HDP and about its members and executives that caused the closure," he remarked.

"If Turkey is a state of law, the closure of HDP is an emergency, it is vital, it is a must," he added.