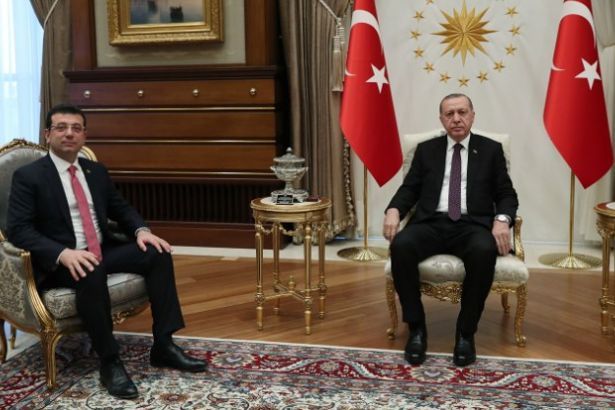 Having said before the meeting what he wished to find out most was the requests and wishes of Erdoğan about İstanbul, İmamoğlu left the meeting satisfied. In his press statement after the meeting which took approximately 45 minutes, İmamoğlu underlined that the most important moment of the meeting was when he asked for Erdoğan’s vote and Erdoğan smiled at him and said: “It was a good conversation, a good interview where we heeded his experiences and views on İstanbul.”

İmamoğlu also shared his appreciation and witness for Erdoğan who had been elected İstanbul Metropolitan Mayor in 1994 and had “communicated successfully” with citizens. He said: “And I confirmed that. I am a witness of that period as a person who lived in İstanbul at that time.”

Mentioning that he had expressed his wishes for a fair and courteous process before the elections, İmamoğlu answered a question regarding the fact that Binali Yıldırım has not resigned from his position as the Turkish Parliamentary Speaker while being nominated as İmamoğlu’s rival in İstanbul, which is illegal: “It is within the discretion of our President of the Parliament. There are legal issues, there are the codes in the Constitution – I don’t know that part of the matter. My only advice could be that the Reverend Parliamentary President might have a difficult time walking around in İstanbul. It can be hard to walk around with a delegation.”

Binali Yıldırım, on the other hand, had defended his position saying: “I have a proposition: All those who are nominated for the elections shall resign. Let the Parliament pass this kind of regulation, and all these discussions will come to an end. Let us all resign, and then, I will.” Yıldırım had also advocated that an election is “not a political activity”.

However, Hamdi Yaver Aktan, Honorary Department Head for the Appeals Court, commented on the issue that the elections in İstanbul might be canceled should Binali Yıldırım does not resign, and said: “This is beyond ethics. Municipal candidacy is totally a political activity, there is not a shred of reservation in it.”

Ekrem İmamoğlu, the mayor of Beylikdüzü district in İstanbul, started his political career in a right-wing party ANAP (Motherland Party). He became the mayor of Beylikdüzü in 2014 local elections, that was governed by a mayor from AKP before. İmamoğlu organized an Islamic memorial service in 2011 on November 10 for the commemoration day of Mustafa Kemal Atatürk.