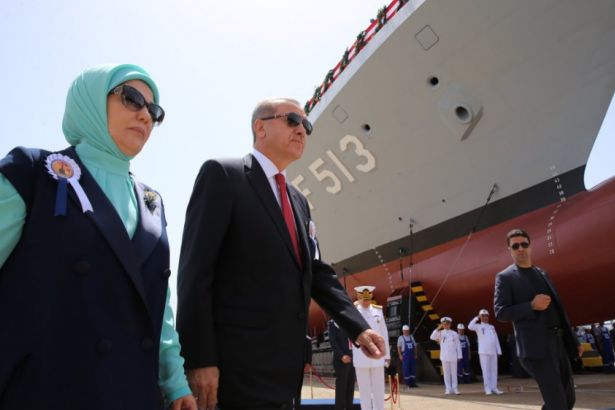 The family of Turkish President Recep Tayyip Erdoğan are owners of a 26.5-million-euro ($29.64-million) oil tanker, which was acquired under a secretive offshore arrangement, a consortium of European news outlets reported Friday.

The outlets began publishing on May 19 an investigation called the "Malta files," delving into more than 150,000 documents from the Mediterranean tax haven. The Maltese government has said there are no secrets to be found in the cache.

Through offshore companies in the Isle of Man and Malta, the Erdoğans secretly own an oil tanker worth nearly 25 million USD called the Agdash.

The deal was constructed with Erdoğan's close friend and Turkish businessman, Sıtkı Ayan, and an Azeri-Turkish billionaire called Mübariz Mansimov, owner of İstanbul-headquartered shipping conglomerate, Palmalİ Group. Documents show that since 2008, the cost of the Agdash deal for the two businessmen totals nearly 30 million USD, with seven million from Ayan, and nearly 23 million from Mansimov, according to the reports.

The Erdoğans obtained the Agdash from Mübariz Mansimov in October 2008, using a company in the Isle of Man called Bumerz Limited – named after its principal owners - the president’s son, Burak Erdoğan, his brother, Mustafa Erdoğan, and brother-in-law Ziya Ilgen.

Mansimov and the Erdoğans formed a business relationship over many years. Mansimov founded his own company, Palmali. Today, Mansimov owns almost 100 freighters. His empire controls around two-thirds of the oil trade in the Black Sea region. The billionaire is considered well-connected. He is a friend of US President Donald Trump and was present at his inauguration in Washington DC in January this year.

When the 39-floors of residential and office block Trump Towers opened in İstanbul in 2009, Mansimov was the first customer - buying eight apartments, including the penthouse.

In 1998, Mansimov extended his operations to Turkey. Eight years later, he accepted Turkish citizenship and adopted a Turkish name, Mübariz Gurbanoğlu - allegedly at Erdoğan's request. “The esteemed Prime Minister asked me, ‘Why don't you become a Turkish citizen?’” Mansimov said in an interview with Turkish media. In 2006, he did just that. 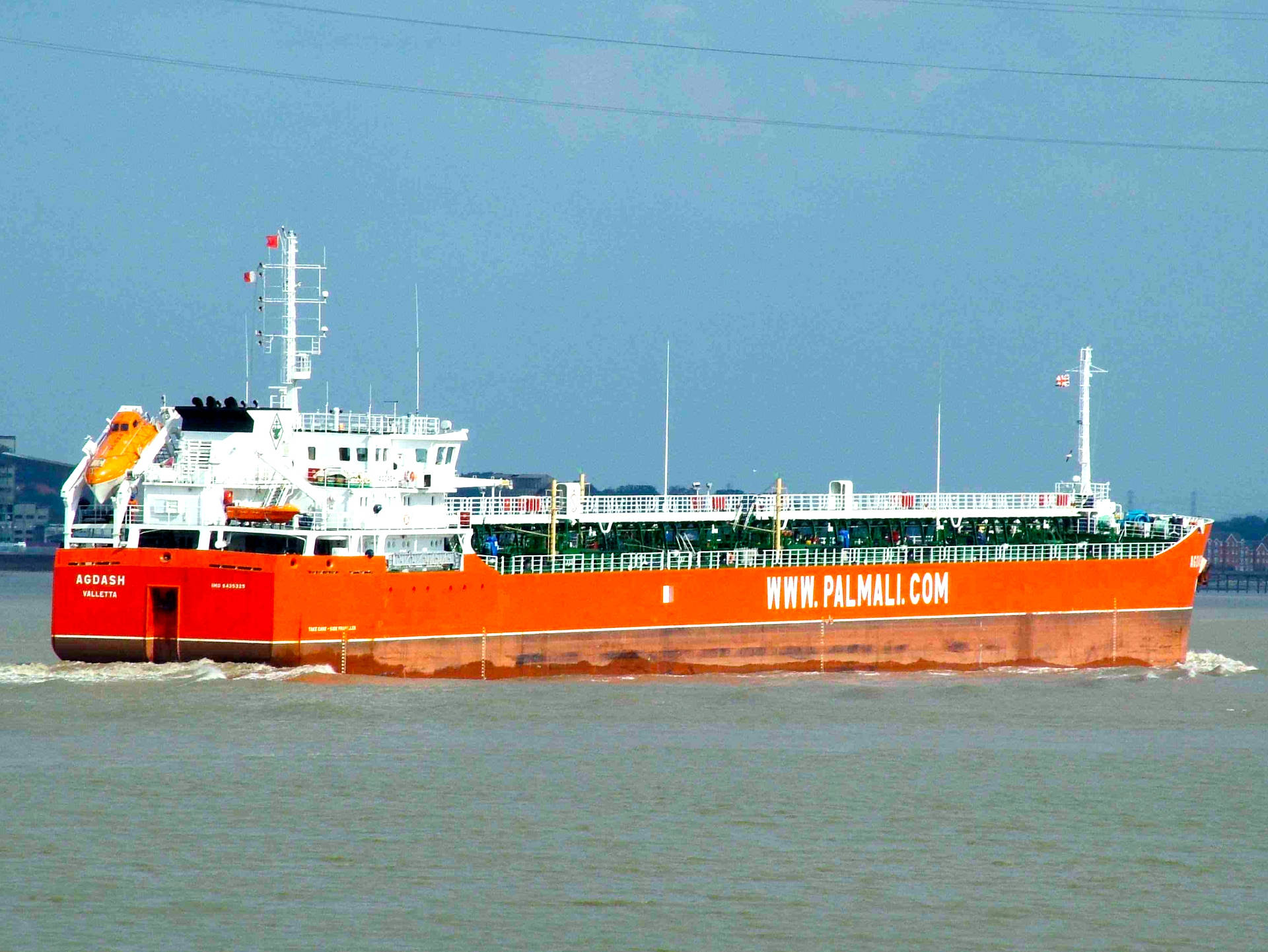 The business between the billionaire and the Turkish ruling family is based on a complicated structure now revealed to the public for the first time using research and documents from the 'Malta Files' and other sources.

Mansimov ordered the building of the Agdash – named after a city in central Azerbaijan - from a state-owned Russian shipyard called United Shipping. In March 2007, he opened a Malta company for the vessel, Pal Shipping Trader One, The Black Sea news site reported.

In the same month, Erdoğan's brother-in-law, Ziya İlgen, registered Bumerz Limited in the Isle of Man, a small Island in the Irish Sea that recently attempted to throw of its reputation as a tax haven.

İlgen, a former teacher, rarely appears in public. But he is said to have managed Erdoğan’s business interests after he became prime minister in 2003.

United Shipping delivered the Agdash to Mansimov in the autumn of 2007. To help pay the bill for the construction, the Azeri arranged a loan of 18.4 million dollars from the Latvian bank, Parex, which for years was known to launder cash from corrupt figures from Eastern Europe and the ex-USSR.

The loan was never issued to Mansimov.

Instead, the Agdash spent a year sailing around the North Sea and Baltic Sea, visiting ports and oil terminals in the likes of Latvia, Netherlands and the UK. Meanwhile, then-Prime Minister Erdoğan fended off threats from Turkey’s courts and military.

In October 2008, with Erdoğan's situation stabilised in Turkey, Bumerz Limited obtained 100 per cent of shares in the Agdash’s Maltese parent company, Pal Shipping Trader One for around 25 million dollars - the value of the ship when it was first built.

Documents from the Isle of Man company registry show that the day after the transfer, on 24 October 2008, Parex Bank finally issued the 18.4 million USD loan - to Bumerz. On some of the documents for the financing, available on the public registry, Ziya İlgen's name appears.

The Erdoğans, however, never paid a cent of the loan.

In a seven-year charter contract agreed that same day, Mansimov pledged to repay the Parex credit completely on behalf of the Erdoğans.

According to Maltese documents, the agreement, between Bumerz and Mansimov’s Palmali Shipping in the Caribbean, states that he would “pay as from the 1st to the 37th instalment to Parex Banka on behalf of Bumerz Limited as a charter hire of Pal Shipping Trader One Co Ltd or directly to Bumerz Limited”.

This means that the Agdash is essentially a gift from Mansimov. And from 2008 to October 2015, this gift cost him at least 21.2 million USD.

Here is the Mansimov deal in graphic form: 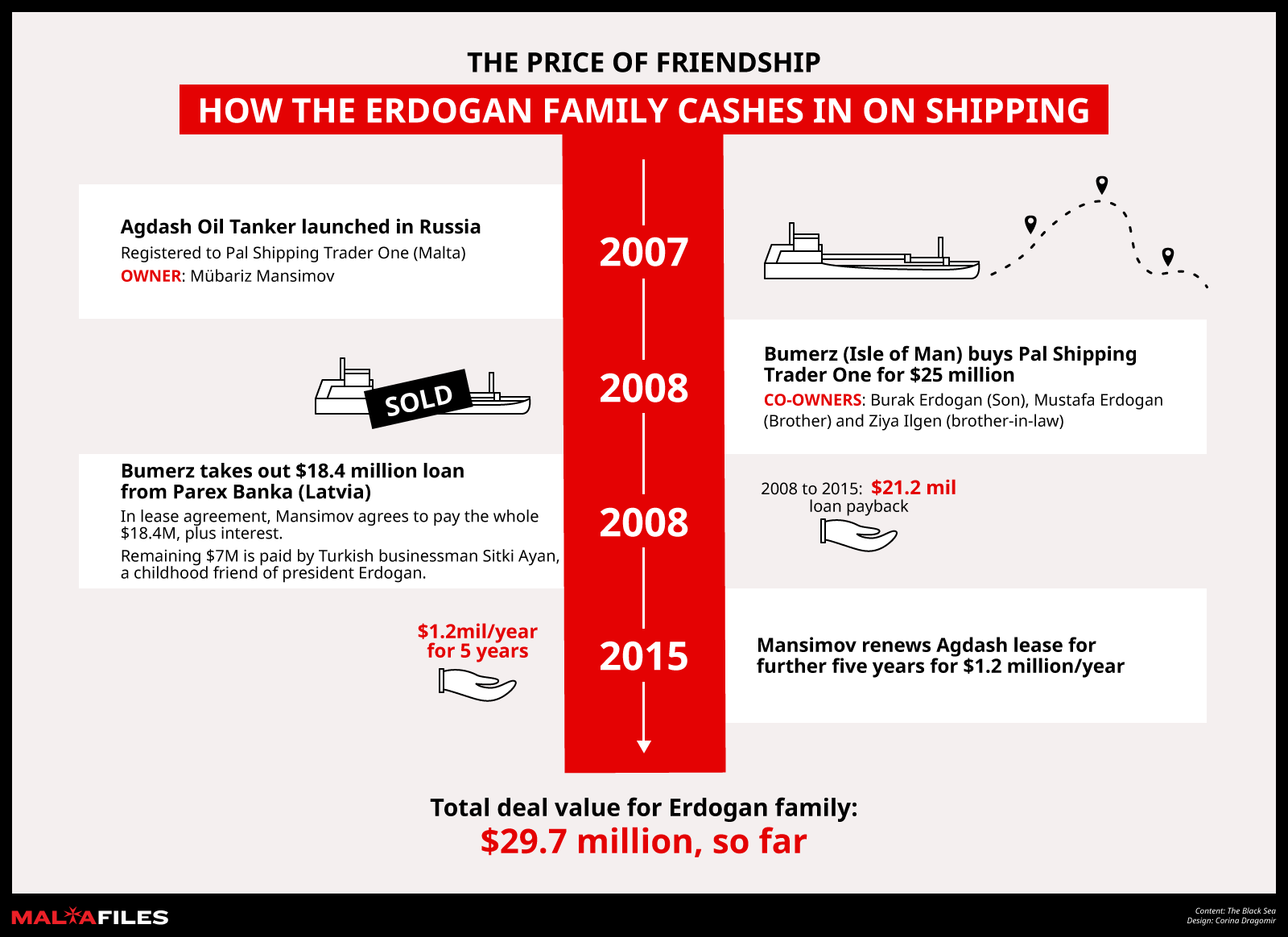 The remaining seven million dollars of the Agdash sale was paid by Erdogan's close friend Sıtkı Ayan - for reasons which are never explained.

For anyone familiar with Turkish political scandals, the Ayans make an unsurprising ally for the Erdoğans. In 2013, leaked conversations between Erdoğan and his son, Bilal, strongly hinted at the payment of bribes by the Ayans in return for state benefits.

But what did Mansimov gain from this apparent deal? While there is no evidence of a direct quid pro quo from Erdoğan, there are many indications that Mansimov received the goodwill of the Turkish government after the trade, as his business in Turkey picked up significantly after 2008.

Today in Turkey, Mansimov is a business polymath, with interests in healthcare, energy, construction, tourism, airliners, and luxury cars.

The entrepreneur won a privatisation bid to develop a luxury port in the southwestern city of Bodrum, on the Mediterranean Sea. The port is known as the “billionaire club” because of its attraction of celebrities and aristocrats such as Prince Charles and Bill Gates.

He holds shares in Tekfen, a Turkish construction company he bought with the State Oil Company of Azerbaijan (SOCAR) in 2008. Tefken is involved in high-value strategic projects, including the Baku-Tiflis-Ceyhan and Trans-Anatolian Natural Gas pipelines (TANAP) in Turkey. The TANAP contract is worth nearly half a billion dollars.

Mansimov is close to SOCAR. In 2007 and 2008, Palmali signed agreements with SOCAR to “transport from the port of Ceyhan in Turkey, on an exclusive basis, all the crude oil” flowing from oil-rich Azerbaijan to Turkey through the Baku-Tbilisi-Ceyhan pipeline “for a period of 10 years”.

The relationship between Mansimov, SOCAR and the Erdoğans is increasingly suspect, in light of research conducted by The Black Sea. Only a few months ago SOCAR secretly purchased five oil tankers from the Erdoğan family's other company, BMZ Group, using companies in Malta.

The sale took place in January 2017. That same month Erdoğan’s government effectively seized the management of SOCAR's gas operations in Turkey as part of its post-coup purge, and installed their own people at the helm.

For the two years before the sale, these tankers, like the Agdash, were rented by Mansimov's Palmali Group. Turkish media has alleged that the Azeri shipping magnate was paying off the loans for the five ships as part of a charter agreement, though no paper evidence has been uncovered.

Mansimov has proved useful in other ways. In 2015, the Turkish government turned to the billionaire for assistance during a diplomatic crisis with Iraq. Ankara was exporting unauthorised crude oil from the Kurdish Regional Government in Northern Iraq through Turkey's Ceyhan port on the Mediterranean Sea. This angered the Iraqi central Government. When Baghdad blacklisted the Turkish shipping company managing the exports, Mansimov stepped in to take over, with a Liberian Greek outfit that kept the Iraqi oil flowing out of Ceyhan.

The Erdoğans make every effort to obscure their ownership of the vessel. Although they contributed a seven million initial payment for the Agdash, the Ayans do not appear on the scene again for three more years. In 2011, The Erdogans pass the shares in Bumerz to another Isle of Man company set up by Sıtkı Ayan and his son, Bahattin.

It appears that the Ayans - who declined to comment for the story - never really bought the Agdash. Secret and public documents obtained during the course of the Malta Files investigation reveal that despite the Ayans' names now beginning to appear on company documents, Ziya Ilgen still attested, on at least three occasions after, to remain as the “sole beneficial owner” of the Agdash. The documents authorise the Ayans to act on Ilgen's behalf. The latest of these was signed by Ilgen on August 2014, three years after the supposed transfer. 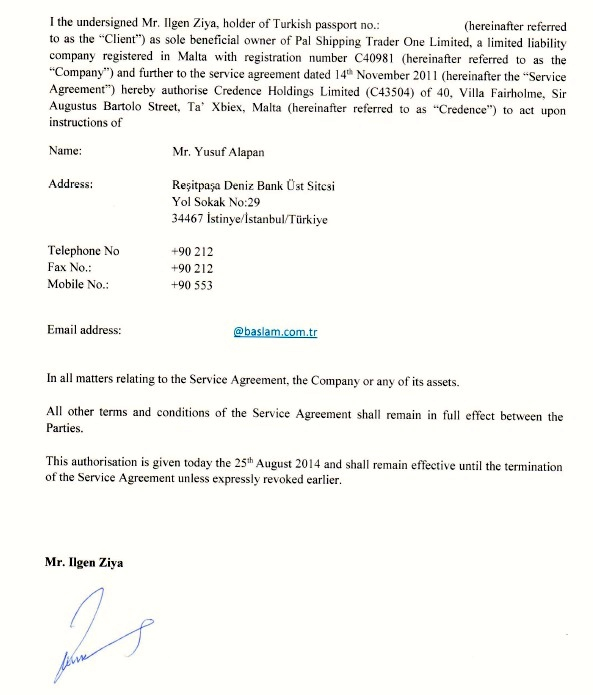 Mansimov still rents the ship. After paying off the Parex loan in October 2015, he extended the contract with Bumerz for a further five years - increasing the total payments to date to nearly 23 million dollars. With the Ayan's Seven million, the total value of the Agdash deal is closer to 30 million.

By the time Mansimov's lease agreement ends in late 2020, he will have added yet a further five million dollars to the purses of the Erdoğan family - a friendship that costs over three thousand dollars a day.