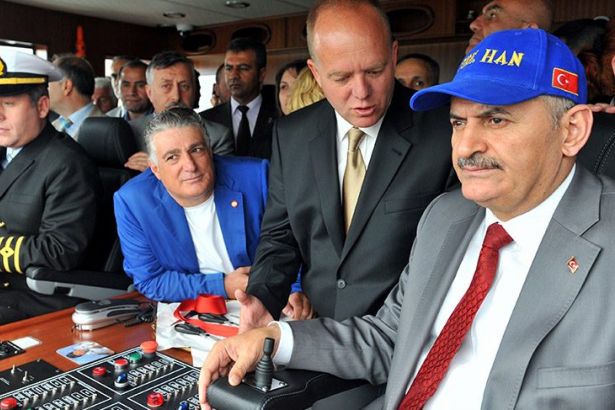 An investigation into Turkish Prime Minister Binali Yıldırım’s family enterprise, part of the European Investigative Collaborations’ (EIC) Malta Files, has revealed that his family currently possesses shipping and related assets of well over 100 million euros, according to reports on The Black Sea and Media Part news websites.

An investigation into the Yıldırım family enterprise, part of the European Investigative Collaborations’ (EIC) #MaltaFiles, reveals that the family currently sits on shipping and related assets of well over 100 million Euro.

Yıldırım’s family enterprise consists of 11 foreign-flagged ships nested in a network of secretive companies in Malta, the Netherlands and the Netherlands Antilles — specifically now Curaçao, with more suspected in the Marshall Islands and Panama. At least four of the ships are financed with huge loans from Swiss and Turkish banks, including one part-owned by the Turkish state.

While some of the activities, especially in tax havens, remains opaque, The Black Sea news site discovered that Yıldırım's son, daughter, uncle and nephews have purchased seven properties in the Netherlands, worth over two-and-a-half million dollars – all of which were paid for in cash.

The investigation also uncovered how the Yıldırıms used one of these Dutch companies to anonymously donate 600,000 Euro (1.75 million Turkish Lira) to the municipality of Pendik, near Istanbul, for a lavish new mosque.

EIC's investigation traces how the family's offshore shipping operation has grown in line with Binali Yıldırım's towering career to become the second most powerful man in Turkey.

Prime Minister Binali Yıldırım is no stranger to mixing his family's fortunes with his role as a public servant. His career in shipping manager began in 1994 when he managed the Istanbul Fast Ferries Company (IDO), owned by the city. However, the Istanbul bosses fired him in 2000 over revelations he awarded a contract to manage the ferries’ canteens to his uncle, Yılmaz Erence.

The first traces of the Yıldırıms’ offshore adventures appear in Malta in 1998, via a company that alludes to the Turkish provenance of its shareholders — Tulip Maritime Limited.

This was headed by the Prime Minister's Uncle Yılmaz and contacts from Turkey’s political and business world. These included Salih Zeki Çakır, a known ship-owner who employed Yıldırım briefly before his career in Government, and Ahmet Ergün, President Erdogan’s advisor from his days as Istanbul Mayor, as well as a former MP and high court judge, Abbas Gökçe.

Their first vessel was the Silver Fish, a cheap twenty-year-old cargo ship, which was soon broken apart.

Over the course of the 2000s, the team built up other companies and bought other ships. These are now mostly broken up or sold. By 2009, when Yıldırım delivered his impassioned speech promoting Turkish nationalism at the Ship Owners Association, the 4,000-tonne ‘City’ appears to be the only foreign asset. This was sold by Erkam two months later to their Panama company, North Bulkers S.A., before being broken up in 2011. 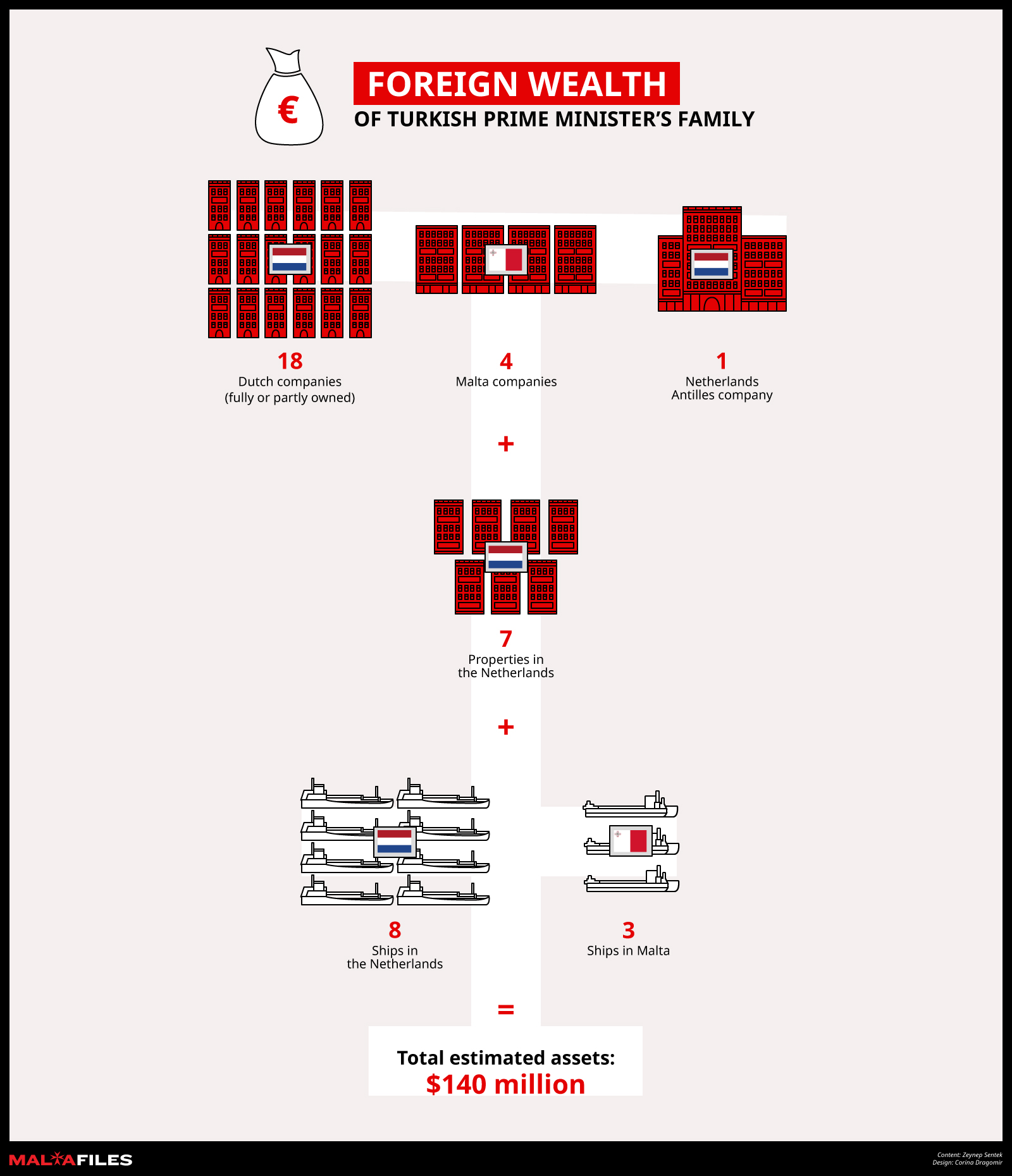 Since then the family’s shipping fortunes have acquired a formidable buying power. Six of the eleven ships identified by The Black Sea and EIC – worth between 1.9 million and 33 million Euro - appear to have been bought without any bank loans. If so, this suggests an enormous cache of funds exists in the Dutch operation, despite on paper being a money-losing business.

The eleven ships are owned by offshore companies in the Netherlands and Malta, countries with attractive tax benefits for the maritime industry.

In February this year, Binali Yıldırım – as Prime Minister - visited Malta to sign a refugee agreement with the local government.

If he had been so inclined, he might have taken the short journey to visit the offices of Mifsud and Sons Ltd in the capital, Valletta, and the nearby town of St Julian's. This firm is owned by its namesake, Simon Mifsud, and represents the Yıldırım family’s latest shipping outfits in the country, called Dertel Shipping Limited, Nova Ponza Limited, Rory Malta Limited and Nova Warrior Limited.

The Yıldırıms took over the new companies on 9 June 2016, a little over two weeks after Erdogan appointed Yıldırım as Turkey’s Prime Minister.

The director of each of these is Süleyman Vural, Yıldırım’s nephew.

Inside three of these companies are three ships. These include the never-before revealed MV Shark, owned by Rory Malta Limited, the MV Ponza, by Nova Ponza Limited, and the MV Frezya S, registered to Nova Warrior Limited. Two of these, worth 1.9 million and two million, were obtained with the help of loans from the Swiss Cornèr Bank.

Rory Malta and Nova Ponza lead to Ceren Danışmanlık Denizcilik in Turkey, a shipping business set up by Uncle Yilmaz and his son, Rifat Emrah Erence, in Istanbul, at the end of 2015.

The shareholder of Dertel – which does not own any ships - and Nova Warrior is a Dutch Caribbean offshore company called South Seas Shipping NV. On paper, it appears to be a dead end, leading to corporate law firm CMT Shipping NV, in Curaçao.

Corporate service providers such as CMT are often used as nominees by businesses and individuals wishing to hide their involvement. When the companies are in a tax havens like Curaçao, this adds an often-impenetrable layer of secrecy.

Maltese company records give strong hints to the real owners. For example, Erkam Yıldırım signs the documents for one of the above companies, South Seas Shipping. 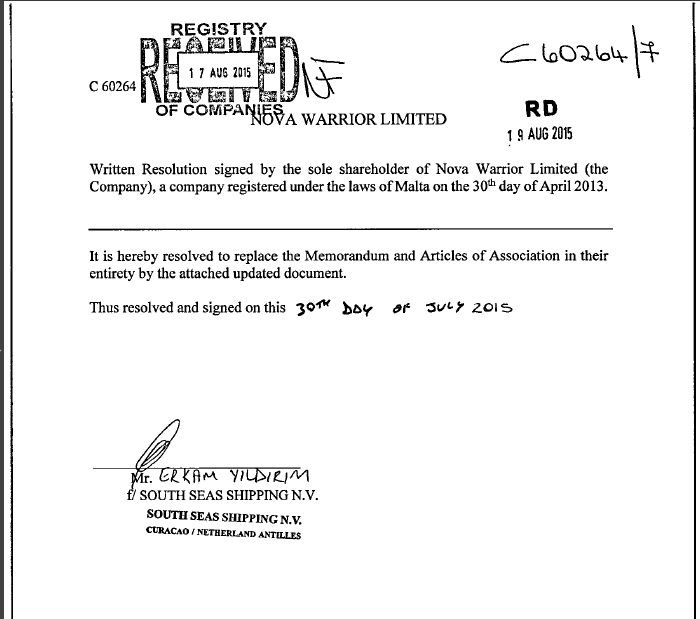 Today, the ships sail through the Med around Bari, Italy, the Greek Islands and the southern coast of Spain. They are each valued at between two and three million dollars.

The Yıldırıms did not answer questions about South Seas Shipping, according to The Black Sea report.

But this is minor league compared to the family’s Dutch operation - where the assets reach over 130 million dollars.

Erkam Yıldırım has strong commercial ties in the Netherlands. These interests include modest properties and expensive ships.

Set up in 2007, Zealand, housed next door to the dentist's office, was run and owned by Erkam until June 2014, when it was bought by Holland Investments Cooperatif UA.

This change is cosmetic. Like with South Seas, company records in the Netherlands reveal Erkam as the man behind the new owner, and in charge of its 129.8 million USD assets.

Through Holland Investment Cooperatif UA, the company records show that family also owns 30 per cent of Q-Shipping BV based in Barendrecht. The partner in this venture is Abdülvahit Şimşek, a Turkish businessman who shares an office with the Yıldırıms in Istanbul.

Right now, Q-Shipping BV and its subsidiaries manage 20 ships - none of which sail under a Turkish flag.

Until last year, Zealand Shipping had ten ships flying the Dutch flag. In January 2016, a Turkish conglomerate close to the Erdogan government, Kolin Group, bought two of these vessels.

Today, Zealand Shipping and its subsidiaries still own eight vessels.

The bill for these is not small. The Rotterdam, Amsterdam and Almere cost around 33 million Euro each to build. But Dutch records show that only the Amsterdam-listed a debt, a loan of 33 million to the Kuveyt Türk Bank, a non-interest, Islamic financial institution part-owned by the Turkish government though the Directorate General of Foundations, whose director sits on the bank’s board.

Another loan taken out by Zealand is for the Juliana, a dry bulk carrier, which was financed by a 17.16 million Euros from the Yapı ve Kredi Bank in Turkey.

In total, three of the ships were constructed by Sefine, a shipbuilder close to Binali Yıldırım. Sefine was run until 2014 by Suat Hayri Aka, when he was forced by Turkish law to transfer his shares to his brother in order to accept a government job.

What was this position? Undersecretary to the Ministry of Transport. This made him the deputy of Binali Yıldırım.

But rules do not always apply to friends. Despite clear conflicts of interest rules on public entities, the Ministry continued to conduct business with Sefine, likely violating laws in the process.

It is not the only act of generosity towards Sefine by Yıldırım. In 2010, the year Sefine began constructing Zealand’s ships, Yıldırım brokered the sale of half of the company’s shares to Kolin to save it from financial ruin.