'Voice of TKP' is out on Tuesday, September 10, celebrating the 99th anniversary of the foundation of the Communist Party of Turkey (TKP) 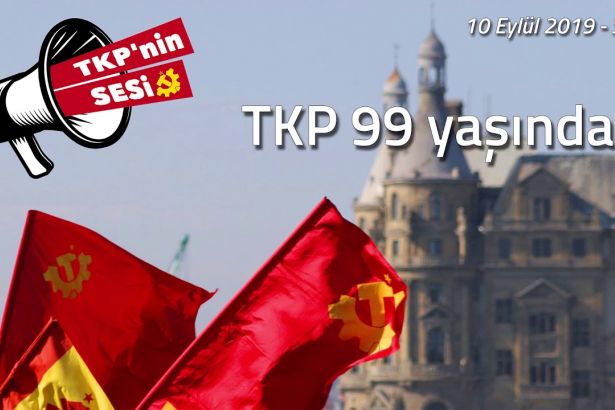 TKP banner for the 99th anniversary of the party
  

The latest release of the weekly podcast of the Communist Party of Turkey (TKP), "Voice of TKP", is out today, on September 10. As TKP is celebrating the 99th year of its foundation, the weekly podcasts will continue to be released daily as of today.

Celebrating the anniversary of the foundation of the party, the latest podcast touches upon the questions "what is the aim of the communist party?" and "what is it fighting for?" The introductory part of the podcast answering these questions is as follows:

The Communist Party of Turkey is fighting for a system where there is no unemployment. Yesterday, a mine was closed in the Merzifon district of Amasya. 253 workers were unemployed. Some of them went on a hunger strike to seek their rights. TKP wants workers to not have to go on a hunger strike to protect their right to work. Unemployment is a problem that this order creates and this order must be destroyed.

The Communist Party of Turkey is fighting against imperialism. The other day in Hon Kong, thousands of people marched with US flags in their hands and shouted, "Trump, give us freedom." This is not the first time we have ever met those who demand freedom from the world's bloodiest, most dangerous imperialist state. TKP is the party that will disrupt the games of imperialists and their collaborators who are enemies of freedom, brotherhood, and peace. We cannot be friends with imperialism.

The Communist Party of Turkey is fighting for a world where women are equal. A world where women are not oppressed, humiliated, harassed or murdered... TKP is the party that will eradicate the discrimination against women by standing against the hypocritical representatives of this order who pretend to protect the rights of women.

The Communist Party of Turkey is struggling for a just world. Last week, the CHP's Istanbul Provincial head was sentenced to imprisonment for made-up reasons. We will turn this country where people are now imprisoned and arrested by the orders of the President or the Minister of Internal Affairs into another one where people are not afraid of each other, live, produce and speak freely.

The Communist Party of Turkey is also expressing the fact that real justice is possible only in a system where there is no exploitation. If the hospitals, schools, roads, mines, coasts of the country have become private properties of individuals and companies, if needles, automobiles, cement, clothing, and food are all produced by working people receiving low wages and the capitalists make millions at the expense of the workers, there is no justice in the country.