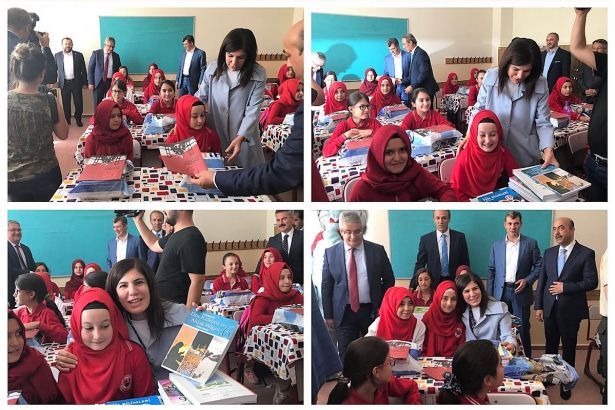 Schools began the new academic year on Monday amidst escalated debates on the reactionary regulations the Turkey's Islamic-rooted AKP government imposed on the curriculum of first, fifth, and ninth graders. The government reshaped the education system along Sunni Islamic lines.

The controversial curriculum leaves out the theory of evolution and brings in the concept of jihad, defines obedience to husbands as "a religious service" for wives, and teaches Islamic criminal law. Ruling AKP party encourages teenagers to marry, and makes value judgments about engagements, weddings, and spousal duties, ignoring the Code of Civil Law. According to the Ministry of National Education (MEB), marrying atheists and non-Muslims is "unacceptable", and there is no age limit on child marriage.

A textbook defines women's "obedience" to men as a form of "worship". "Allah says it, not me. Should I correct him, or what?" said the head of  Board of Education, Alpaslan Durmuş.

Prime Minister Binali Yıldırım had attended a school opening on Sept. 18 and clarified the changes, saying: "Some people are asking 'Why did you change the curriculum?' Of course, we will change it.  We change it because young people’s needs change. You will get to work with this new curriculum. Enjoy it." The Minister of Education İsmet Yılmaz had stated that these changes were made with a pluralist approach when he had announced the new curriculum on July 18.

The new so-called "pluralist" curriculum caused controversy, leading Turkish citizens to gather in a demonstration in İstanbul on September 17. Citizens protested the unscientific curriculum in defence of the right to "secular, scientific and free education". The Communist Party of Turkey (TKP) also attended the demonstration.

According to the MEB's statistics, student attendance in primary schools has decreased while students attending Islamic schools have increased across the country. The 2016-2017 academic year witnessed student attendance to primary school at its lowest for the past 10 years. The government had removed compulsory 8-year education system, paving the way for Islamic middle schools.

The number of students attending Islamic schools compared to last year increased by 75 thousand 767 students. There have been a series of incentives to encourage attendance at vocational schools -including Islamic imam-hatip schools- over the year, such as scholarships and privileges in entering military-police schools.

The AKP government has been converting a large number of schools into Sunni Islamic imam-hatip schools, and promoted Erdoğan’s professed goal of raising a "pious generation" of Turks.

Under a scheme introduced by the government in 2014, about 40,000 pupils have forcibly enrolled in imam-hatip schools. In some districts, Islamic schools became overnight the only option for parents who could not afford private schools.

According to the MEB’s earlier statistics, before the introduction of the "4+4+4" system in the place of the contentious compulsory 8-year education system, students attending open plan schools had been numbered barely a million.

In 2012, the government introduced the "4+4+4" system with four-year phases of primary, middle, and high school, paving the way for Islamic middle schools. Following the transformation, the number of open plan school attendees rose to one million 287 thousand 249 students.

Thousands take to streets in Turkey to demand secular education