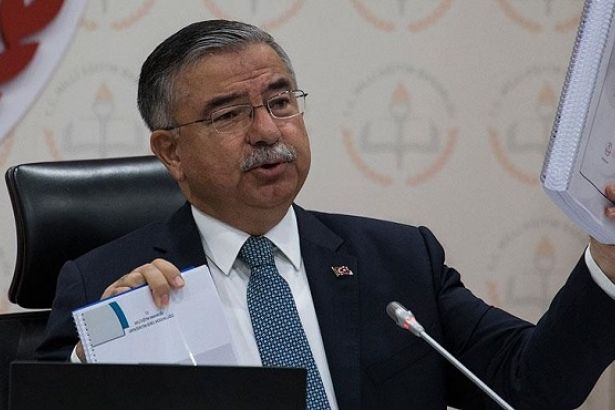 The final version of Turkey’s national school curriculum has left evolution out and added the concept of jihad as part of Islamic law in books, Education Minister İsmet Yılmaz said on July 18. Yılmaz also said evolution theory too 'complex' for schools. The chairman of a teachers' union described the changes as a huge step in the wrong direction for Turkey's schools and an attempt to avoid raising "generations who ask questions".

Education Minister İsmet Yılmaz said the main elements of evolution already underpinned the science curriculum, but there would be no mention of Darwin's landmark theory until university. "Because it is above the students' level and not directly related, the theory of evolution is not part" of the school curriculum, Yılmaz told a news conference in the Turkish capital Ankara.

The new curriculum will be put into execution for first, fifth, and ninth graders starting from this year, and it will extend to other classes in the 2018-2019 academic year. Accordingly, a total of 176 class curricula have been renewed.

"Jihad is an element in our religion; it is in our religion… The duty of the Education Ministry is to teach every concept deservedly, in a correct way. It is also our job to correct things that are wrongly perceived, seen or taught," Yılmaz said.

"In this manner, in the lessons on Islamic law and basic religion sciences, there will be [the concept of] jihad. But what is this jihad? What our Prophet [Muhammad] says is that while returning from a war, we are going from a small jihad to a big jihad. What is this big jihad? It is to serve our society, to increase welfare, to ensure peace in society, to serve the society’s needs. The easiest thing is to wage war, to fight. The skill is the difficult one, which is to ensure peace and tranquillity," he said.

Mehmet Balık, chairman of the Union of Education and Science Workers (Egitim-İş), condemned the new curriculum. "The new policies that ban the teaching of evolution and requiring all schools to have a prayer room, these actions destroy the principle of secularism and the scientific principles of education," he said.

Balık said the changes were being made in an attempt to stamp out dissenting ideas. "The bottom line is: generations who ask questions, that's what the government fears," he said.

'Information' on last year’s failed coup attempt will also be included in the curriculum. "When the subject of winning democracy is covered in social sciences classes, we will want the July 15 National Unity Day to be covered, too," Yılmaz said. "In Turkish language classes, when topics on the national struggle led by Mustafa Kemal Atatürk [founder of Republic of Turkey] are being discussed, July 15 [2016 coup attempt] will also be touched on," the minister noted.

The reactionary transformation experienced in the last 14 years in Turkey brings about significant results. 31.2 percent of Turkish students under 15 years old underperformed in mathematics, sciences and reading, according to the PISA test. Turkey scored 420 points on the math test and ranked 49th out of 72 countries. Turkey was also 52nd in science and 50th in reading. According to Turkish Education Association (TED)’s "2016 Education Evaluation Report", the average verbal skill score of university graduates in Turkey is lower than the average score of high school dropouts in Japan.

The government of the ruling Justice and Development Party (AKP) reshaped the education system along Sunni Islamic lines. In 2012, the government introduced a contentious 12-year compulsory education system with four-year phases of primary, middle and high school, known in Turkey as the “4+4+4”, paving the way for religious middle schools.

AKP has been converting a large number of schools into imam-hatip religious schools. After the AKP came to power in 2002, the number of students attending imam - hatip schools increased by 90% to almost 1 million children aged between 10 and 18, or 9% of all students. Under a scheme introduced by the government in 2014, about 40,000 pupils have forcibly enrolled in imam -hatip schools. In some districts, religious vocational schools were suddenly the only alternative for parents who could not afford to educate their children privately.

Reactionary attack with new regulations against education system in Turkey