Meeting with the people of Turkey’s İzmir city at a gathering, the General Secretary of the Communist Party of Turkey (TKP) Kemal Okuyan clarified the position of the TKP as to the local elections on March 31 and explained the role of the communists 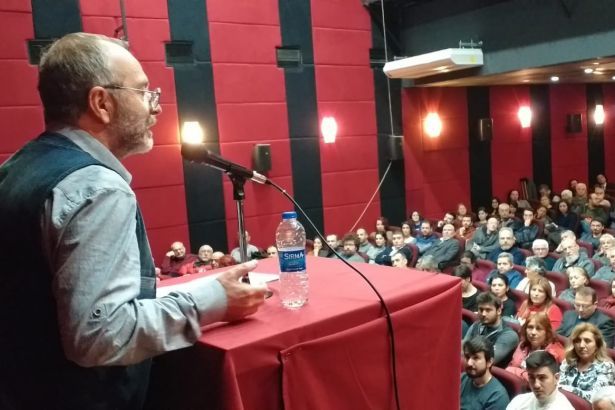 Kemal Okuyan, General Secretary of the Communist Party of Turkey (TKP), met with the people of Turkey’s İzmir at an event titled “TKP and the Local Elections”, clarifying the position of the party on the elections on March 31. TKP also plans to announce its candidates for the elections on February 10 at a meeting to be held in the capital city, Ankara.

Explaining his views on the current affairs developing inside and outside of Turkey, Okuyan stated that the course towards the elections has exposed the transitivity between the political parties of the capitalist system, saying: “Be sure of that, if you take the other parties of the system out of the political stage and if [Turkey’s ruling] AKP party is left alone as it is today, it will crumble in days. The political power that enables this system to go on is all and the whole of other bourgeois parties. We need to get rid of them.”

“IS IT NOT STRANGE THAT ONE PARTY CANVASSES FOR FIVE OTHERS?”

Underlining that the people of Turkey have witnessed events which in turn have forced them to cry “Is this a joke?” during the period of time before the elections, Kemal Okuyan maintained:

“They [bourgeois parties] behave in such a way that we nearly wonder whether or not they are testing our nerves. Corruption has prevailed in politics. Those who cannot get nominated by their own parties throw their hat in the ring for another party, without even a trace of a principle. A party that participates in the elections have canvassed for five different parties by now – all but us, which frightens us that we might be next. Two parties may come to terms and form an alliance, which is understandable; but is it not strange for a party that takes part in the elections to canvass for five other parties in various cities? Several rumors go around – it is said that Mansur Yavaş, the candidate of the [parliamentary opposition] CHP and [right-wing, nationalistic] Good Party, will transfer to AKP after he has won the elections [in Turkey’s capital city Ankara], and no one can reply, “Oh, he wouldn’t.” How many people would be shocked if that happened? I do not think that many… Even the supporters of CHP would not be shocked, for they have got used to getting shocked. There is a tremendous amount of transitivity between the parties.”

“THERE IS PRACTICALLY ONE PARTY FOR THIS SYSTEM”

Emphasizing that, though the parties of the capitalist system display various differences, they all advocate for the continuity of the system, Okuyan said:

“I think we must pause for a moment after talking about the parties of the capitalist system and correct ourselves by adding: There is practically one party for this system – one party for the capitalist system that encapsulates all others. Why? There are certain fixed elements in politics in Turkey at different times. Those elements have been dispersed among various parties. There are elements in each party that are close to the others; each party has a door opening to the others. There are doors from the [pro-Kurdish] HDP party to the CHP and vice versa; from the [fascist parliamentary opposition] MHP to the CHP and vice versa; from the Good Party to the [fundamental Islamist] Felicity Party and vice versa. Turkey is governed by [the President] Erdoğan and the AKP, but the AKP is not the only thing that enables the system to go on – it is them, those parties. Be sure of that, if you take the other parties of the system out of the political stage and if AKP is left alone as it is today, it will crumble in days. The political power that enables this system to go on is the whole other bourgeois parties. AKP is in power with a special mission; they have the last say and authority. On the other hand, they cannot move a finger without the existence of the others. The elections have exposed this reality more than ever. The parties of the system do not want this truth to be revealed, but the events throughout the course towards the elections have shown the truth.”

Stating that the network of the bourgeois parties in Turkey is also a network to distribute the rent in localities, Okuyan said:

“The rent in the central power is not flowing to the pro-AKP companies only. There are companies in Turkey which have grown rich during the AKP rule and which belong to the pro-CHP capitalists. In local governments, on the other hand, rent is shared – it is shared depending on the voting rate or power of the parties in municipalities. Therefore, both politics and economy have nestled the whole which we call the party of the system. When we talk about the capitalist system, we need to look at the whole picture.”

Okuyan also reminded that TKP has a special role against this picture and stated:

“We object to the whole of this network of the bourgeois parties and say, ‘This social order must change.’ Society cannot endure such a depressing scene. One of the most interesting features of these elections will be the participation of TKP. CHP, who identifies itself ‘left-wing’, does not have a candidate, even a claptrap candidate, in a city like Kocaeli which has a high population of working-people – not a candidate in a symbolic city like Samsun. TKP will have a special mission in many places, and the only party that will represent the option out of this system will be TKP. We will be announcing our candidates this weekend.”