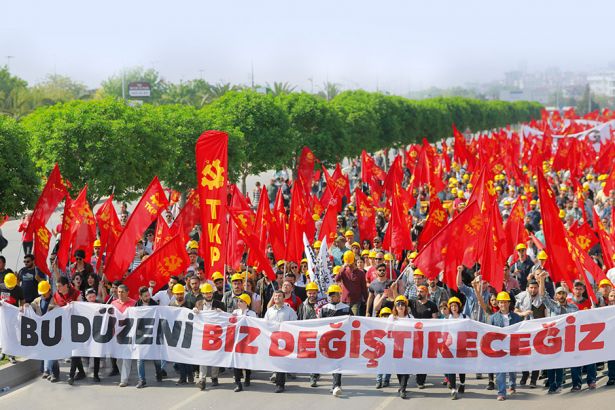 Turkey's local elections will be held on March, 31. According to the announcement of Turkey's Supreme Electoral Council, 13 parties, including the Communist Party of Turkey (TKP), are eligible to participate in the local polls, through which metropolitan and district municipal mayors, as well as provincial and municipal councilors, will be elected in all 81 provinces of Turkey. The electoral process officially began on January 1 and the electoral strategies, as well as the candidates, of the parties participating in the elections have been the most discussed issue in Turkey's political atmosphere since then. The Communist Party of Turkey has issued a statement regarding the upcoming elections. The full statement is as follows:

WORKING PEOPLE HAVE THEIR COMMUNIST PARTY

The Communist Party of Turkey will be on the ballots of local elections that will be held on March 31, 2019.

The Communist Party of Turkey has defeated the systematic efforts in order to eliminate the left-wing politics from the election platform in Turkey. There will be a political party that has completely different objectives than the bourgeois parties increasingly resembling each other, and this is of great importance for keeping hopes alive.

SYSTEM CHANGE IS NOT TOMORROW'S BUT TODAY'S ISSUE

The Communist Party of Turkey will be making use of the elections effectively in order to prevent the people from going after false solutions and make them use their power towards the socialist alternative that is the only solution for a humanly life. A system without exploitation is possible and the system change is not tomorrow’s but today’s issue.

In the existing system, democracy, freedom, justice, peace, independence, and equality all remain as specters. However, organized people, fighting working class can gain rights and stand against the detrimental policies of the bourgeois power. TKP will be using the election platform to strengthen the people’s organized power.

THOSE REPRESENTING THE PEOPLE WILL BE WORKING

Local governments have turned into institutions that transfer resources to capitalists and create new doors for rentiers rather than serving the public. TKP will be nominating people for municipal councils to monitor municipalities on behalf of the people, to prevent theft and corruption, the defend the interests and demands of the working people in local governments.

In various places, we will also seek to nominate TKP candidates for mayors in order not to leave the field to the pro-capitalist parties and to show that governance benefiting public interests is possible even in this system. We will create powerful examples showing a different understanding of local governance.

After winning the elections from our party's list in Ovacık in 2014, Fatih Maçoğlu, showed a successful example of a municipality for the interests of public on the basis of collective work despite all the constraints and he is now the candidate for mayor of Dersim, representing a broad alliance including us. Socialist Councils Federation's candidates for mayor of Dersim and candidates for mayors and municipal council members for four different districts in Dersim will be participating in the elections as TKP candidates.

THE TIME OF SETTING HOPES ON BOURGEOIS PARTIES IS OVER

When the Communist Party of Turkey, after years of struggle against the ban, participated in the elections in 2002 for the first time, we shouted that "If money has its kingdom, working people have their Communist Party".

Since then, TKP has carried the flag of egalitarianism, freedom, patriotism, enlightenment and has been the conscience, mind, and voice of the working people. We took a principled, determined and consistent stance against liberal, nationalist or religious politics.

We are now emphasizing much more strongly and calling on all workers, laborers, intellectuals to break away from the bourgeois parties and to strengthen hope: "If money has its reign, working people have their Communist Party".