Communist Party of Turkey announced a local government manifesto, including the party’s 12 principles for local administrations ahead of the upcoming local elections on March 31 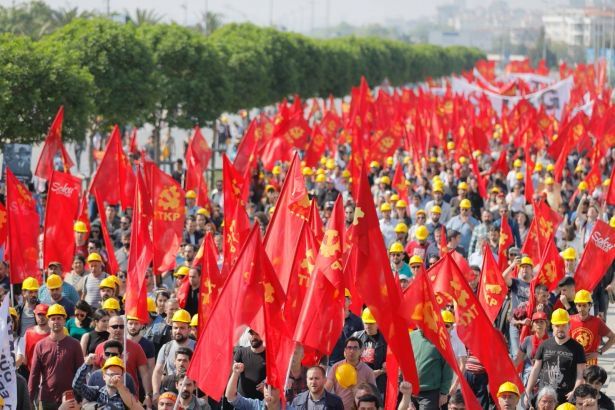 TKP has already launched its electoral campaign under the slogans, “We are not in the same boat” and “If money has its reign, working people have their Communist Party”, in all 81 provinces of Turkey, 85 districts and 2 towns with its mayoral candidates and municipal councils. The 12 principles of the manifesto are as follows:

1. For the communists, every municipality where they conduct their principles stands for a position that should be defended against the existing social order until they accomplish the revolution in Turkey.

We can only rely on the working people's organization while defending this position. For the communists, the main goal in local administrations is essentially to open channels for the people's participation in administration, as they increasingly comprehend their organized stance. The working people who can access to more opportunities and platforms will be more conscious for protecting this position against the social order. Wherever the communists get authorization, the people will have a voice in local administrations via such channels as the representations of neighborhoods, districts, schools, and workplaces.

2. The communists aim for the welfare and prosperity of people in local administrations.

Local governments in this social order focus on the share of profits. The communists shall start from dispersing the gangs of profit that surround municipalities. Not a single boss or contractor will be able to use municipalities for their advantages and interests. The sole goal is to increase workers' living standards. All the activities of municipalities shall be planned in accordance with the people's needs.

3. All the available means shall be used for the working people's access to healthy and qualified conditions of housing, transportation, education, culture, and recreation.

The main goal is to provide the working people with healthy and safe housing conditions, educational facilities, safe public transportation, and the opportunities for recreational activities and vacation. Only with the struggle of communists in local administrations can the green areas be protected and improved against the profiteers.

4. The rule of communists in local administrations means the development of a culture that strengthens collectivism and solidarity.

One of the primary tasks of communists in local administrations is to create such environments where the children, youth and adults can improve themselves together. An easily accessible and widespread network of libraries, science centers for the children and youth, theatres for dramas that we will write and play altogether, choruses and orchestras where we will learn and sing our songs, series of conferences that explain how to use science for the benefit of workers, and collective sports activities shall be the instruments of this culture of collective life.

5. The communists' works in local administrations shall also be a barrier before the spread of drug use.

The communists will take measures in order to protect our youth against this social order's corruptive attacks on the working people, the drug use and any kind of degeneration.

6. Facilities shall be created for the equality and freedom of women.

It is among the responsibilities of communist local administrations to establish kindergartens at workplaces and neighborhoods, to support the women’s participation in public life out of residences, and to protect them against violence.

The communists have a determinant significance in creating extra possibilities for the employment of women as workers who have equal rights.

7. We shall work to protect and promote health.

The people’s basic health problems, the safety of drinking water and food, school health, sports health, and the issues of recycling and wastes can be solved only if the communists become influential in local administrations. Health units will be established at municipalities, where volunteer doctors and healthcare workers will work.

8. The establishment of consumption and production cooperatives shall catalyze the life of working people.

It is only the work of communists to stimulate producer cooperatives in accordance with the features of consumption and related localities against expensiveness led by market chains and the relations of the free market.

9. The communist municipalities shall not be “corporations” that behave the workers like a boss.

There will be no contradiction of boss/employees against the workers who work for municipalities, and the workers will participate in decision-making processes in such a position where they struggle for common goals in the name of the emancipation of humanity.

10. The communists shall put an end to the mechanism of subcontracting that has been imposed upon local administrations under the guise of service, which only seeks for the interests of capitalists.

The communists will reject the mechanism of subcontracting that has been imposed upon municipalities for the last 30 years and will put an end to all the implementations that have turned the municipal works into a profitable field of exploitation for the advantage of large and small capitalists.

11. The communists shall not allow racism, religious fundamentalism or sectarianism in local administrations.

The communist municipalities will have no room for such approaches that classify the working people as second-class citizens for their languages, ethnic roots or beliefs. The communists will not allow the abuse of religion in local administrations, but will adopt a secular model of administration, and will organize fraternity, peace, and unity.

12. A relation with the societal idea based on liberty and equality shall be established in local administrations.

No matter in what city, district or town the communists take the lead, they will always keep in mind that they are accountable for the whole country and the whole humanity, that everything they do is meaningful as part of the struggle for enlightening the future of our country and the world.