Paris is ready for dialogue with Turkey and diplomatic ways to ease the recent tensions in the Eastern Mediterranean over maritime borders and energy resources, but it needed to respect the European Union’s sovereignty, international law, particularly on the issues Libya and Syria, French President Emmanuel Macron said in a speech for the United Nations General Assembly on Tuesday. 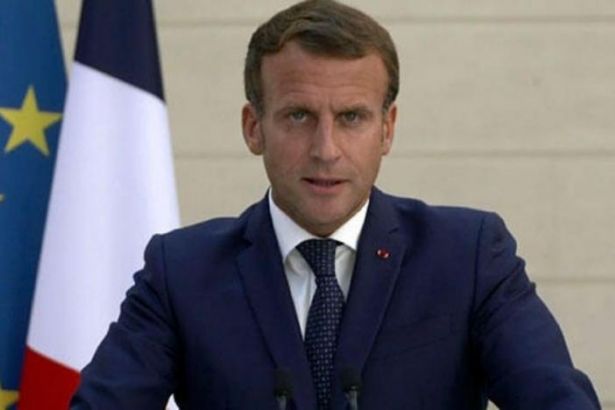 Speaking in a video message played during the 75th session of the United Nations General Assembly in New York on Tuesday, French President Emmanuel Macron said, ‘‘We Europeans are ready for dialogue for the essential construction of a Pax Mediterranea, but not at the cost of intimidation, not at the cost of survival of the fittest, with respect for international law, cooperation and respect among allies,’’ and added that these principles are non-negotiable.

French President Macron also stated that a commitment to effective, clear dialogue in the Eastern Mediterranean is necessary to prevent new conflict zones which would jeopardize international law.

France is ready for the solution of the problems in the Eastern Mediterranean through diplomatic ways and to dialogue with Ankara to ease the tensions in the region over energy resources and maritime zones on condition of respect to international law and sovereignty rights of the European Union.

Since huge gas reserves have been explored in offshore areas of Cyprus in recent years, relations between Ankara, Athens and Paris supporting the Greek claims in the region have been tense for a while over the ambitions on gas reserves and disagreements over sovereignty rights to strategic areas of the Eastern Mediterranean. Both Turkey and Greece have laid claim to overlapping zones, asserting they belong to their respective continental shelves.

In November 2019, Turkish government signed a deal with Libya’s U.N.-recognized Government of National Accord (GNA) based in Tripoli to create a so-called exclusive economic zone (EEZ) from Turkey’s southern coast to Libya’s north-east coast, while Egypt and Greece condemned the agreement, declaring it as illegal.

Following Greece and Egypt signed a maritime deal early August that sets the maritime boundary between the two countries to demarcate an exclusive economic zone for oil and gas drilling rights, Turkey’s Ministry of Foreign Affairs had made a statement on the Greek-Egyptian maritime delimitation agreement, announcing that it is null and void for Turkey.

Ankara claimed that this deal was a response to a maritime agreement signed between Ankara and the GNA last November.

Amid all of these developments, tensions have gradually flared up over the issue of energy exploration in the Eastern Mediterranean, as Greece, with the support of France, has condemned Turkey's energy drilling activities in the region.

Ankara and Paris have also had serious disputes over Libya, as the Turkish government has been financially and militarily supporting the country’s U.N.-recognized GNA, while France has been supporting the Libyan National Army under General Khalifa Haftar’s leadership.

Meanwhile, Turkish President Recep Tayyip Erdoğan on Tuesday talked over phone with his French counterpart Emmanuel Macron on the issues of Libya, Syria and the recent tensions in the Eastern Mediterranean, the Turkish Presidency’s Communications Directorate announced in a statement.

‘‘During the phone call held upon French President Macron’s request, the relations between Turkey and France as well as between Turkey and the EU were discussed and regional developments including particularly the Eastern Mediterranean were addressed,’’ the statement released by the Presidency’s Communication Directorate noted.

‘‘President Erdoğan indicated during the conversation that the ignorance of the legitimate rights of Turkey and the Turkish Cypriots in the Eastern Mediterranean was the reason for the tension in the region, and stated that he failed to understand France's support for the maximalist claims and steps of Greece and the Greek Cypriots that served to further escalate the tension,’’ according to the statement of the Turkish Presidency’s Communication Directorate.

The Communication Directorate also informed that ‘‘Turkish President Recep Tayyip Erdoğan indicated during the conversation with his French counterpart that the ignorance of the legitimate rights of Turkey and the Turkish Cypriots in the Eastern Mediterranean was the reason for the tension in the region, and stated that he failed to understand France’s support for the maximalist claims and steps of Greece and the Greek Cypriots that served to further escalate the tension.’’

‘‘Stressing that Turkey had no eye on any country's rights and would never allow its rights to be usurped by anyone; President Erdoğan said Turkey, as always, advocated dialogue and cooperation for resolving problems,’’ the statement added.

Turkish Presidency’s Communication Directorate further said in its statement, ‘‘Underscoring the need to make use of diplomatic opportunities and implement sustainable negotiation processes to decrease the tension, President Erdoğan expressed Turkey’s willingness to discuss and solve all the problems around the table.’’

‘‘President Erdoğan said Turkey expected France to adopt a prudent and constructive stance and underlined the value of a functioning consultation and communication mechanism between Turkey and France,’’ it is also highlighted in the statement, concluding that the Turkish President stressed the importance of an approach that encouraged constructive dialogue and cooperation towards Turkey at the EU Leaders’ Summit for the possible solution of regional issues.