Erdoğan says Russia, US give green light to op, will not step back from Afrin offensive 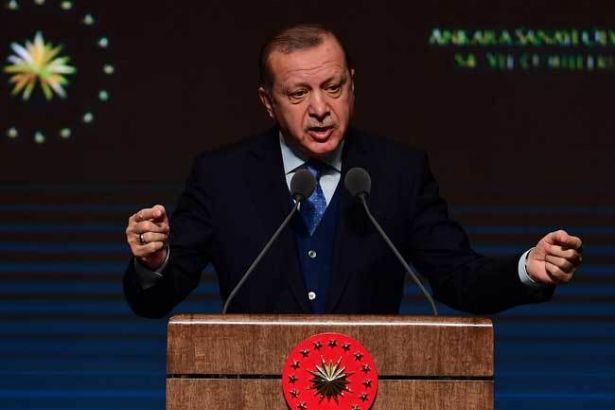 President Recep Tayyip Erdoğan on Monday vowed that Turkey would not take any step back in its offensive in Syria's Afrin region, saying the campaign had the backing of Moscow.

"There's no stepping back from Afrin," he said in a speech in Ankara. "We discussed this with our Russian friends, we have an agreement with them, and we also discussed it with other coalition forces and the United States." Syria has strongly objected to the Turkish incursion, and Moscow, which controls parts of Syrian air space on behalf of the Syrian government, has not confirmed giving a green light to it.

The Turkish military on Saturday launched operation "Olive Branch", its second major incursion into Syrian territory during the seven-year war.

He expressed impatience with demands, including from some officials in Washington, to set a clear timetable for the length of the operation. "When the work is finished -- we have no desire to stay there -- we know how to withdraw. We also have no intention of getting permission from anyone for this," he said.

"How long have you been in Afghanistan? Is that over in Iraq?" he said, referring to the current US military presence in those countries which began with 2001 and 2003 occupations.

"WE RESPECT THE TERRITORIAL INTEGRITY OF SYRIA"

Erdoğan said that Turkey is not eyeing Syrian territories and that the ongoing operation in Afrin will end as soon as its objectives are met.

"We fully respect the territorial integrity of Syria and the safety and security of Syrian people, this is actually the objective of this operation. Turkey has no design on the territories of another country," he said.

However, on January 16, asked if Ankara-backed Free Syrian Army (FSA) militant group would be involved in the operation against Afrin, Erdoğan had told reporters in parliament: "Of course they will, together. This struggle is being conducted for them. Not for us."

Erdoğan on Afrin operation: The main objective is to hand it over to its true owners