Al-Qaeda founder's name given to İstanbul’s street in Turkey

​The AKP’s Municipality of Ümraniye in İstanbul gave the name Abdullah Yusuf Azzam, one of the Al-Qaeda founders, to a street 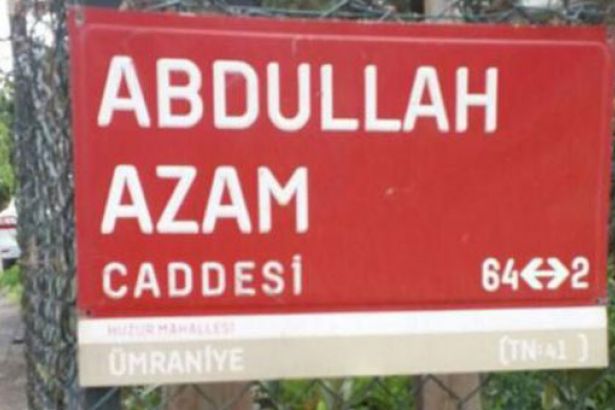 The name of one of the Al-Qaeda founders, Abdullah Yusuf Azzam, was given to a street in İstanbul by the Justice and Development Party (AKP)’s Municipality of Ümraniye.

Abdullah Yusuf Azzam was placed at the top of the list of international terrorists until 1989 when he was killed in a bomb attack. Azzam is known for one of the ideologues of Islamist fundamentalist terror organisation Al-Qaeda and the founder of the idea of "global jihad".

Abdullah Azzam is also one of the most influential names that shaped the views of Osama Bin Laden who is known for his all-out slaughters and suicide bomb attacks all over the world.

Bringing up the issue to the agenda of the Turkish Parliament, the Republican People’s Party (CHP) İstanbul Deputy Sezgin Tanrıkulu tabled a parliamentary question to be responded by the PM Binali Yıldırım.

In the parliamentary question, Tanrıkulu asks such questions regarding whether the Republic of Turkey considers Al-Qaeda as a terrorist organization; on what grounds the name of the founder of Al-Qaeda was given to a street in Turkey; and whether the government will assign a trustee to the Municipality of Ümraniye due to giving the name of a terrorist organization’s founder to a street.

Last year, from a vehicle officially belonging to the Üsküdar Municipality of AKP, a call had been made that "we must re-establish the Islamic unity and choose our Caliph" during "Support to Aleppo" demonstrations in İstanbul.

Meanwhile, Al-Qaeda-affiliated Ahrar al-Sham, a Salafi terrorist organization clearly expressing its anti-democratic stance, had shared a support message for the AKP following the coup attempt on July 15, 2016, saying that "Turkey, we are on your side, we are with the elected government", while celebrated the Turkish government that eliminated the coup.