Pro-government İHH, known for its connection with the jihadists in Syria, was granted an honour award by the HTS which is the Syrian faction of jihadist terrorist Al-Qaida in İdlib, Syria 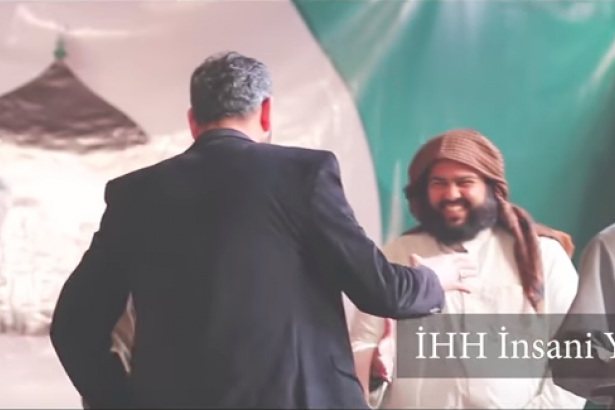 Ha’yat Tahrir Al-Sham (HTS), which is the Syrian faction of jihadist Al-Qaida, held an award ceremony in Idlib province of Syria for "the secret heroes of the revolution" including Humanitarian Relief Foundation (İHH) from Turkey.

The representative of İHH, who was invited to the stage in the ceremony, received his award from Abu Jaber (also known as Hashem al Sheikh), the leader of the Ha’yat Tahrir Al-Sham, and Saudi national Al-Qaida terrorist Abdallah al-Muhaysini.

Speaking at the award ceremony held by the Ha’yat Tahrir Al-Sham, the leader of the jihadist terrorist group Abu Jaber said that "we cannot thank you enough" referring "the secret heroes" of their so-called revolution.

The first awardee went up to the rostrum was the representative of "the Syrian Civil Defense", which is also known as the White Helmets. The White Helmets was the sole source of pro-interventionist oppositions to Syria regarding the chemical leak in Khan Sheikhun town of Idlib province on April 4, which was shown as a reason by the United States for its missile attack on Syria on April 7.

Although the White Helmets, receiving 100 million dollars in total by both the United States and the United Kingdom, had previously come to the fore due to the allegations on its strong ties with Al-Qaida.

Following the White Helmets, Turkey’s İHH representative appeared on the stage and received its award from Abu Jaber and Abdallah al-Muhaysini.

According to phone records entered into the indictment in the lawsuit on Al-Qaida conducted in Turkey last year, the fugitive prime suspect responsible for supplying materials and gathering jihadists for the Islamic State (IS) had confessed that he can use the İHH for this issue. In 2014, a CIA-linked expert on Turkey Henry Barkey also said that jihadists in Turkey collaborate with Al-Qaida and Islamic State through the İHH. In the bill of indictment, it had been also underlined that many suspects of the Al-Qaida case joined the Islamic State, while they were fighting under the ranks of Al-Qaida in Syria in the beginning of the investigation.

The HTS strictly opposed to the protocol proposed the establishment of ‘non-conflict zones’ in Syria, signed by Russia, Iran and Turkey on May 4 in Astana, the capital city of Kazakhstan.

While some allegations have come to the agenda regarding Turkey may launch a military intervention to Idlib province of Syria under the control of the HTS, the jihadist terrorist group announced that they have taken certain military measures against Turkey which was accused of being "the agent of the Crusaders" by HTS.

The HTS also holds protest demonstrations against Turkey across Idlib province. London-based and pro-opposition the Syrian Observatory for Human Rights (SOHR) reported that particular fatwas were given against Turkey in the mosques under the control of The HTS on May 12. According to SOHR, the phrase "gangster" was used for Turkey’s President Tayyip Erdoğan in the fatwas.

İHH was one of the main organisations of the Neo-Ottomanist initiative orchestrated by Erdoğan and his ruling Justice and Development Party (AKP). The so-called Humanitarian Relief Foundation is known to have played a major role in aggressive policies towards the Syrian people and its legitimate government.

The Turkish foundation participated in many unlawful operations under the supervision of the Turkish National Intelligence Organization (MİT). During the long-term devastating aggression towards Syria, İHH supplied the terrorist jihadists, including al-Qaida-affiliated groups in Syria, with arms and materials via hundreds of trucks in transit through the Turkish-Syrian border.

Russian Foreign Minister Sergey Lavrov also conveyed the UN in March 2016 that arms transfers were carried out in the region via “humanitarian” convoys.

Linked with the Muslim Brotherhood and its affiliations across the region, İHH played role in the Mavi Marmara incident (the Gaza flotilla raid), which resulted in a diplomatic crisis between Turkey and Israel.

During the negotiations to restore the relations between Turkey and Israel as two main US allies, President Erdoğan hypocritically sold out IHH targeting the foundation, "When you set sail you need to ask me. Did you ask the prime minister before you embarked on a humanitarian mission from Turkey to Gaza?"

As one of the main contributors to Neo-Ottomanist dreams of Erdoğan and his party, İHH has been disfavoured by Erdoğan recently together with the downfall of Ottomanism in the region and reconciliation with Israel.