Mehmet Görmez, the President of Religious Affairs in Turkey, met with the Secretary-General of the Association of Muslim Scholars in Iraq Muthanna Harith Al-Dari who is on the United Nations Security Council’s Sanction List of ‘individuals financing Al-Qaida and Islamic State’ 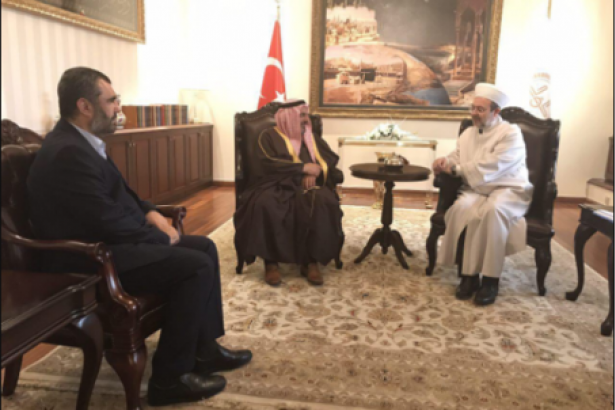 A further proof regarding the collaboration of Turkey’s ruling Justice and Development Party (AKP) with jihadist components in Syria has been revealed: On May 5, Mehmet Görmez, the President of Religious Affairs (Diyanet) in Turkey, met with the Secretary-General of the Association of Muslim Scholars in Iraq Muthanna Harith Al-Dari in Ankara.

The Religious Affairs Directorate operates under the Office of the Prime Minister and Görmez is a close official of President Recep Tayyip Erdoğan.

According to the information given on the web-site of the Association of Muslim Scholars in Iraq, issues such as ‘general affairs in the region, the problems that peoples of the region suffered, tasks of the scholars in the struggle with these problems, the prevention of the roads to dissension, and ensuring and turning people into the truth’ were discussed in the meeting.

Görmez stated that he knows the Association of Muslim Scholars in Iraq very well, and appreciates its activities and efforts carried out in Iraq.

Görmez also said that "today, many people who earlier opposed the Association of Muslim Scholars in Iraq  as a fundamentalist organisation confess that the analyses and diagnoses of the Association are  correct."

According to the report in UNSC’s sanction list dated December 15, 2015, Al-Dari is charged with "providing operational guidance financial support and other services to or in support of Islamic State in Iraq and the Levant, listed as Al-Qaida in Iraq (AQI)". Oil smuggling is also among the services given to Islamic State by Al-Dari.

Born in 1969, Al-Dari currently lives in Jordan, and allegedly provides $1 million worth of financial support through various channels to Al-Qaida.

According to former U.S. Ambassador to Syria, Robert Ford, Al-Dari was allied with Izzat Ibrahim Al-Douri, the current leader of the underground Ba’ath Party in Iraq. The Association of Muslim Scholars in Iraq had described the invasion of Mosul as ‘the great victory of the revolutionaries’ referring to Islamic State.

Al-Dari, who is also on the sanction list of the U.S. Department of the Treasury, did not have an entry permit to Iraq. Dari, complaining about the sanctions in an interview in 2013, had said that he could only enter Qatar without constraint.

In 2015, the representatives of the United Nations had also visited Al-Dari in Amman, the capital city of Jordan. It seems that Turkey has joined the countries which have accepted Al-Dari after his meeting with Turkey’s President of Religious Affairs.

Turkey’s President Tayyip Erdoğan had met with Saudi capitalist Yasin Abdullah Ezzedine al-Qadi, who was banned worldwide on charges of "providing financial support to Islamic terrorism, particularly to Al-Qaida" by the United Nations Security Council in 2001. Al-Qadi was removed from the terror list of the United Nations in 2012, and of the United States in 2014.