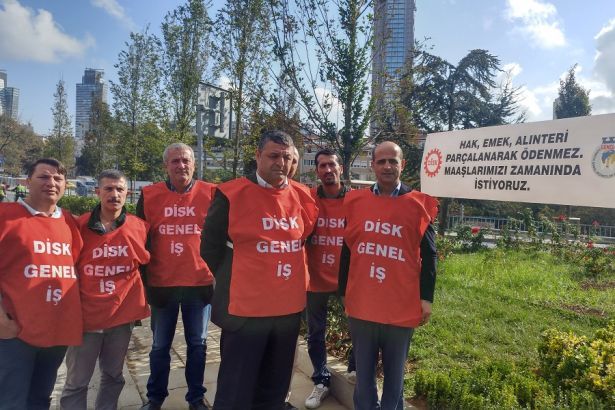 As the capitalists lay the burden of the economic crisis in Turkey on the shoulders of the working class through mechanisms like massive layoffs, increased prices and unpaid wages, workers from different sectors around Turkey react to the violation of their rights under the pretext of economic crisis.

Workers of Kent Yol sub-contracting firm from Şişli Municipality in İstanbul started a protest in front of the municipality building on October 16 to demand their unpaid wages for months. Talking to soL news during their protest in front of the municipality building, the workers noted that their wages are not being paid regularly since the beginning of 2018 with the excuse of economic crisis. "The crisis is only for the workers", they said, noting that their employers are not influenced from the crisis.

Similarly, sub-contracting Mataş firm workers from Maltepe Municipality in İstanbul started a strike action early on October 16 to protest their unpaid wages. More than 5 hundred sanitation workers stopped working at the worksite, warning that they would not start working unless an exact date of payment is announced. The workers noted to soL news that the management announced November 20 as the date of payment after seeing that the workers are decisive.

The workers also said that KSC construction firm asked for the support of CMS several months ago due to the fluctuations in exchange rates, demanding that the wages of the workers to be paid from the company's progress payment. However, these demands are denied and the KSC firm started the process of bankruptcy.

On October 13, the Communist Party of Turkey (TKP) inaugurated a solidarity, struggle and communication network of workers against the crisis and the capitalists as its profiteer. The network has already started organising workers from different sectors around Turkey.