"We will join our forces. We will not bow down to the bosses. We will clamp down on the exploiters. Those who suppose that workers are all alone should know that we will breathe down bosses’ neck" 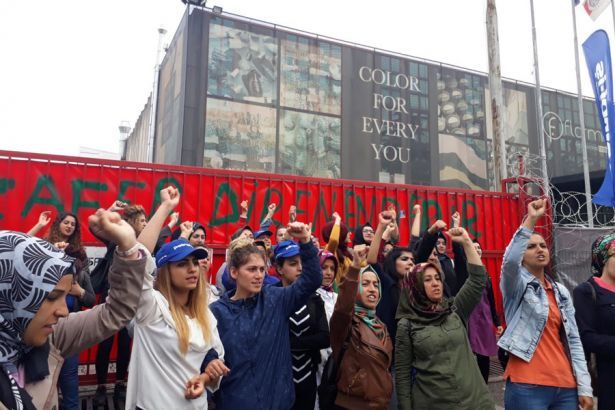 Communist Party of Turkey (TKP) has established a solidarity, communication and struggle network against the crisis and its profiteers, the capitalists

In its appeal, “the TKP will welcome those who wish to have access to this network at its buildings, clubhouses and representative agencies,” the party said. “We will join our forces. We will not bow down to the bosses. We will clamp down on the exploiters. Those who suppose that workers are all alone should know that we will breathe down bosses’ neck.”

You may read the full text of the appeal titled “We will breathe down bosses’ neck” below.

There is a crisis!

The capitalists have already carried their plans into effect while others have been discussing whether there is a crisis or not. The crisis is an outcome of the capitalists’ accumulated sins. Now, they are designing schemes to push it off on the people. However, there are measures that should be adopted to stop them.

More bullying and intimidation for more exploitation: this is how the capitalists’ opportunism in the course of crisis works. We have things to do in order not to allow these opportunistic plans. The richest 1 percent have a wealth equal to the total wealth of the poorest half of the society; yet the rich continue to spin us the same yarn: we are on the same boat!

THE BOSSES HAVE THEIR PLANS, THE WORKERS’ SHOULD HAVE THEIRS AS WELL

The bosses plan to have people work for lower wages and for longer hours on the pretext and threat of crisis. They will loot the government budget on this pretext, leaving the hospitals, the schools, the means of transportation without funds.

If the bosses are devising their schemes, the workers and the toiling people should devise their own schemes as well. In order to remind these looters that they will not be allowed to “run riot”, in order to prevent the opportunists from preying on our labour and country…

The first thing we must do is to act together, get to know each other and increase our ability to act in solidarity.

This is why we are issuing this appeal.

Communist Party of Turkey summons the workers and toiling masses to rally for this end.

We propose the labourers, who are constantly defrauded, forced to work overtime, whose fundamental rights such as health care, education, transportation, etc. are curtailed, who feel themselves under threat, to get together in a network of solidarity, communication and struggle.

Hereby, we proclaim the concrete steps we are going to take under the slogan “We will breathe down bosses’ neck”, and we call the toiling masses to join in:

●      Let’s expose all injustices, bullying, acts against the workers and the people through this communication network. Let’s clamp down on the bosses. Let’s ensure that everybody is aware of everything so that they can lend a helping hand.

●      Let’s not allow any worker, any labourer to be left alone in the face of exploitation and tyranny. Let’s join our forces. We should have our word: one for all and all for one.

●      Let’s be on the side of those who are left defenceless because of poverty, vulnerability, ignorance or fear. Let’s defend them. Let the people on streets, the workers at factories, the lawyers at courthouses to join their forces for this purpose.

This is our appeal. Join the Breathe Down Bosses’ Neck solidarity, communication and struggle network in order to do all of these together, to unite in each and every step we take.