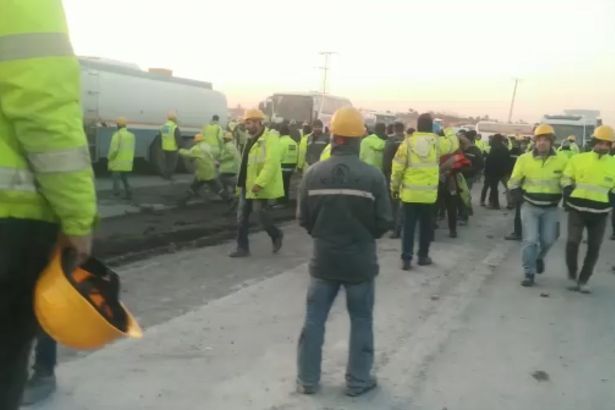 Construction workers held a protest on February 1 at İstanbul’s third airport project site, showing the reaction against the poor working conditions and non-payments.

Around 1500 thousands of workers protested the working conditions, as their working hours were extended so as to finish the airport project that is still under construction. The workers closed the road to traffic while protesting the project owners.

The protestor workers say their shuttle services are inadequate and the food service is so poor that they have to sleep hungry since their work shifts and shuttle hours are irregular.

MINIMUM LIVING ALLOWANCES ARE NOT PAID

The workers point out that the subcontractor companies did not carry out the payments of minimum living allowances as project authorities claim that they cannot do anything about this situation, showing the subcontractors as “authority”.

soL News previously talked with construction workers who were forced to live in dirty, overcrowded and infested rooms. Workers said that they were forced to work overtime even during the meal times to finish İstanbul’s new airport project until February 26, the birthday of Turkish President Recep Tayyip Erdoğan.

İstanbul's new airport is promoted as a great success by Erdoğan's AKP government although many experts and chambers of engineers criticize the project since it disregards deforestation and environmental damages in the north of İstanbul.