"We don't have a history to be ashamed of": TKP General Secretary

TKP General Secretary Kemal Okuyan delivered his speech at the European Communist Meeting in Brussels, emphasizing that anticommunism aims to reduce the legitimacy of the historical struggle against fascism 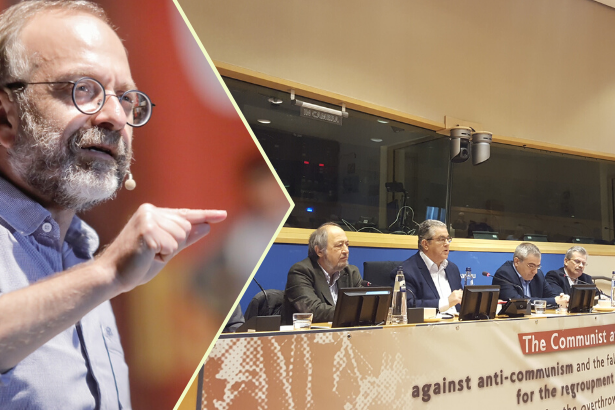 The European Communist Meeting has started yesterday in Brussels, at the building of the European Parliament. 38 parties from 32 countries in Europe, including the Communist Party of Turkey (TKP) participate at the meeting.

The main agenda of the meeting is the struggle against anticommunism and had the title "Communist and Workers Parties against Anticommunism".

"We are seeing that examples of anticommunist propaganda, such as the recent European Parliament Resolution or actions like changing the names of memorials, streets, squares, monuments, etc., aim to distort and generate breaks in the continuity of the history of socialism, and by this, to destroy its historical legitimacy. They are actually trying to create an alleged narrative, a false “remembrance” based on lies and defamations. However, comrades, historical conscience is the fundamental armament of the working class movement. History is our teacher, the reference of our class-reflexes, it is the basis of our world-view. By specifically targeting history, they are trying to render us rootless, to disarm us, and therefore, leave us without a future," Okuyan said.

Noting that "the communist movement stands on the legacy of the victory of defeating fascism, Okuyan stated that "the defeat of the monster of fascism has long been an unquestionable achievement respected and admired by all peoples of the world. The moves of European bourgeois politicians serve on the one hand to open this victory to be questioned and on the other, to justify, to legitimize fascism, or at least to alleviate its illegitimacy."

"The first thing to be done is to be true to ourselves. The history of the working class is our history, with achievements and errors, it is our own reality. It should be researched thoroughly by us, by the heirs of those who made the history, to the point where no single moment is left unilluminated. Unspeaking some aspects of our history is actually doing more harm than good. We should not accept any falsification but we should not allow our own errors to be admitted, in a distorted way, by the dominant class. We can openly and objectively declare what has happened when, which decision was taken for what reason. We shouldn’t remain silent about the Nazi-backed disinformations about so-called “genocide by famine (Holodomor)” of Ukrainians in the 1930s or the so-called “Katyn Massacre”. We don’t have a history to be ashamed of," Okuyan said.

At the end of his speech, Okuyan noted that "we should not allow the bourgeoisie to get away with a fait accompli so easily. These attempts should not be left unanswered or unjudged. We have to object against all falsifications and distortions, by means of propaganda, publications and by political and legal means. We should bring these moves to the courts, of states, and of people, nationally and internationally."