Turkey's metalworkers: "If our demands are not met, we go on strike on February 5th"

Hundreds of workers came together for the rally organized by the United Metal-Workers Union affiliated to DISK in Turkey's Gebze. The workers announced that they would go on strike on February 5 if their expectations were not met until then. 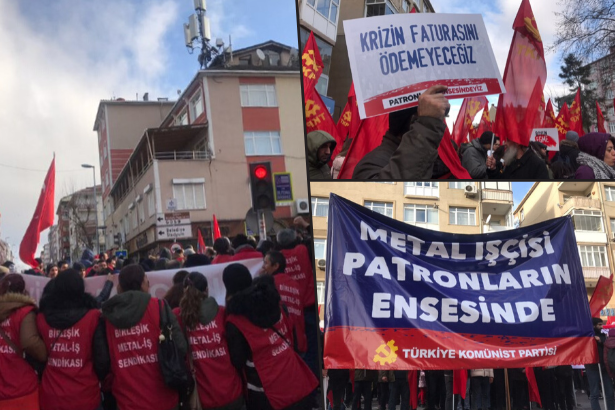 Turkey's metalworkers organized a rally in Gebze with the call of the United Metalworkers (BMİS) affiliated to the Confederation of Progressive Trade Unions of Turkey (DİSK), warning the bosses' union MESS for the last time. Since an agreement could not be reached in the 2019 Group Collective Labor Agreement talks covering 130 thousand metal workers, workers are planning to go on strike. Metalworkers do not accept the offer of an 8 percent wage increase and flexible working conditions of the bosses' union.

Hundreds rallied in Gebze on Sunday to show they were determined to struggle for their rights. The resisting workers shouted slogans in the rally, saying "Our right to strike cannot be prevented" and "If there is no bread for the worker, there is no peace for the bosses."

Speaking to soL news after the rally, the union representative of the workers, Adnan Serdaroğlu, said they would continue following hard on the bosses.

Yapıcılar Orchestra took the stage and sand their songs in the rally area, stating that they would always support the struggle of the working class.

Following the orchestra, DİSK President Arzu Çerkezoğlu took the floor and greeted the metalworkers who did not surrender to the bosses.

Serdaroğlu also noted that the workers' union would not recognize any possible strike ban of the government.

Communist Party of Turkey (TKP) also participated in the rally with great enthusiasm. The party members and friends shouted the slogan "We Breathe Down the Bosses' Neck", which is also the name of the solidarity platform initiated by TKP.