TKP: We're against the referendum, a 'Barzani-land' and Turkey's intervention

"We are against both Barzani and the independence of a 'Barzanistan'. We are against Turkey’s military mobilisation as well. To answer how to prevent it: only a unitary policy is possible; working peoples will unite against imperialism, exploitation and reactionary forces. Those who do not tend to agree with this option will get drowned in the midst of nationalisms and infamous market economy" 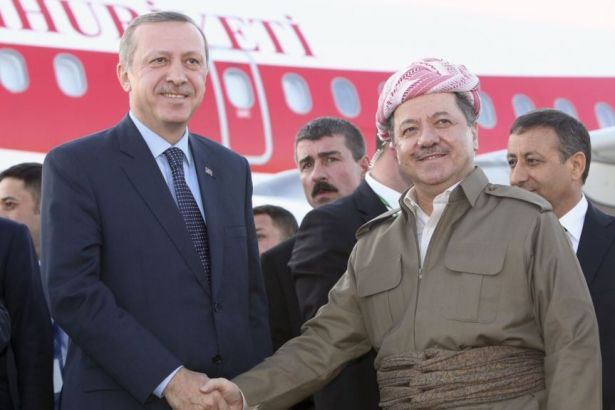 soL News talked with Kemal Okuyan, the General Secretary of the Communist Party of Turkey (TKP), regarding the debates on the Iraqi Kurdistan independence referendum that is scheduled to be held on September 25, 2017.

Okuyan indicates that Turkey’s President Recep Tayyip Erdoğan had good relations with Iraqi Kurdish leader Masoud Barzani until yesterday, arguing that emerging conflicts of interest lie behind the recent crisis in the region. Stating that the referendum in question will not be advantageous for the people in the region, Okuyan puts forth that the working class should unite against all the bourgeois actors and imperialist scenarios including military interventions.

Turkey’s Justice and Development Party (AKP) government and the Nationalist Movement Party (MHP) have increasingly made statements after Masoud Barzani denied postponing the Iraqi Kurdistan independence referendum. Moreover, some have claimed that Turkey will carry out a military intervention in the region. To what extent is this tension realistic?

There are many fictitious and hypocritical elements in this tension. We, however, are talking about a real tension at the same time. Let's start with the fictitious ones. As is widely known, the Barzani-led Kurdistan Democratic Party (KDP) has been one of the most important allies of Turkey in the region. This did not change during the AKP rule, yet the relations have been further strengthened. Barzani has never denied his goal of “independence”, sometimes he only said that the time had not come yet. The administration in Ankara was also aware of this fact, yet they established good relations with Barzani for various reasons. Therefore, Barzani did not fool anyone in this respect.

Did Turkey’s policy towards Barzani only stem from the need for finding a balancing element or a Kurdish ally against the Kurdistan Workers’ Party (PKK)?

No one can reject this intention. Let’s note that Turkey has cooperated with Barzani, one of the most pro-U.S. actors in the region, hence, Barzani has been a part of the alliance in which Turkey has also participated in terms of international balances. Additionally, the Kurdish region became a significant field of investment and profit for Turkey particularly following the U.S. invasion in Iraq. Now they [the Turkish government] are looking aside this dimension of the cooperation with Barzani, but the bourgeois fellows of Devlet Bahçeli [fascist MHP party chair], who attempts to lead the trumpets of war today, were also leading while making business agreements and winning tenders with Barzani. Even some dared to say that such investments and businesses carried out by Turkey’s nationalist capitalist in Erbil and Sulaymaniyah could also help the resolution of the Kurdish question in Turkey. That is definitely a foolish idea alleging that the ambition for money and free enterprise could bring about peace and rest. Capitalism knows no bounds; it cannot exist without igniting racism, war and militarism despite capital does not have any principle, nation and nationality.

Will not these investments fall into danger today?

It is too early to say something on this issue. The region we are located is open to the attrition and tension of dozens of dynamics that cannot fit into a consistent model, making the coexistence of these dynamics almost impossible. Turkish capitalists’ economic relations with Barzani cannot determine all these dynamics. Turkey also had significant economic interests in Qaddafi’s Libya, but Turkey involuntarily took part in the Islamist armed groups' disintegrating Libya during the so-called Arab Spring, which, therefore, posed important disadvantages to the Turkish capitalists. After all, we cannot assure that Barzani and Erdoğan, who mutually quarrel today, will never meet at Erdoğan's palace tomorrow. The conflicts of interest are sharpening in the region, and Turkey takes part in these conflicts of interest as its strength allows, updating its position every day just like the other actors do. Indeed, such a ground exists, which is polluted from top to bottom by the imperialist system. Unprincipled stances, lies and inconsistencies abruptly burst from everywhere.

Can Turkey tolerate an independent Kurdistan? Or, will these conflicts of interest lead Turkey to a military intervention?

We still do not know whether the referendum will be carried or not. Nor do we know how the outcome of the referendum will be implemented… Barzani is as inconsistent and unprincipled as the AKP government is. However, that does not mean that Turkey’s military intervention is a low probability. In the first place, it is definite that Erdoğan and even his yes-man Bahçeli need a “war” for their own personal salvation, or that they see the “war” as a way out. Barzani’s referendum move offers a sound justification to Erdoğan for declaring a war. His opportunities are limited in Syria or the Aegean region. Furthermore, the accumulated tension in our region invites military confrontations today. Wars stem from the intra-imperialist conflicts, yet the economic interests alone do not determine when and how wars break out. In this bourgeois system, rationality and logic are not prerequisite for armed conflicts in any case.

What would be the outcome of such an intervention?

Is it not possible to set forth that a pro-U.S. and Israel-backed Kurdish state could be prevented through a military intervention?

It is a worldwide fact that new states, or rather quasi-states have been founded following the collapse of the Soviet Union, posing a great harm to the peoples of the world. In today’s conjuncture, no new state could be advantageous for the oppressed and toiling people. In our example, it is apparent for whom a Barzani-led Kurdistan would serve. Nevertheless, that does not justify the AKP-led policies of Turkey today. Above all, Turkey’s credentials are extremely poor in such matters as the disintegration and partition of the countries in the region. Turkey was very enthusiastic about the disintegration of Yugoslavia. They wanted to divide Syria into tribal states by means of a bloody scenario.

Further away, the AKP government is carrying out separatism in Nigeria. Turkey played a big role in Barzani’s consolidation in Iraq. Now they want to sink the country into a war! In principle, we should reject Turkey’s cross-border military mobilization. For what reason will the poor youth wage a war? For the investments of Turkey. To whose profit? A handful of capitalists. The region suffers from such policies and politicians that continuously change sides but never side with the people. Turkey was also disputed with the Iraqi central government until yesterday while Barzani was a guest of honour, now we witness the friendship of Baghdad-Ankara. We cannot take this friendship seriously. The conflicts of interest are available at this point.

Today, what they attempt to foist under the mask of Turkey’s interests is, indeed, the interests of Turkey’s hegemonic, exploitative, predatory, dishonest and thief class. Shall we follow those, who turned this country into a playground of the U.S. and NATO in the name of the said class, only for they talk about the “homeland” at the moment! What will save Turkey from all this chaos is to build a pro-people, socialist and egalitarian system that will eliminate the entire ethnic and sectarian discriminations without excluding any citizen while enhancing the whole richness of the country.

The current order in Turkey has dragged the Kurdish question to this situation. The denial, exclusion and elimination policies and the initiatives or the peace process carried out with bargains behind closed doors without apparent goals… That is not the true path. In turn, the similar policies developed by those who are acting in the name of the Kurdish people also led to the same results. Such policies that ignore or downgrade the contradiction of labour-capital, that highlight not social inequalities but ethnic distinctions instead would not generate solutions. The international dimensions of Turkey’s Kurdish question have further complicated today, and those who have led the country into a pro-U.S. trajectory for forty years and committed murders in the name of the NATO say “We are against a pro-US Kurdish state," now! That is nothing more than a charade.

But, cannot we consider the foundation of a Kurdish state in Iraq as self-determination of a nation?

Some consider so, doubtlessly. However, that is not a Marxist or progressive approach as some allege so. Some are talking about such self-determination that is independent from every other aspect while humanity is amidst the fight of backwards-progressive, while class inequalities further deepen and all the worldwide capital groups clash in a playground! Today this right has turned into a trump card for imperialist rivalry just as yesterday. The workers should unite against the exploiters in order to avoid this trap. Why would Barzani and the Kurdish people have a common destiny? “But Kurds want so,” that misses the essence of the point. All the nations and countries should resolve their problems on their own, but, at this point, we should side with the oppressed, progressive and legitimate forces. If a referendum is held tomorrow and the people are asked “Do you prefer sharia?” and if this referendum results in favour of the “yes” side with 51 percent, shall we bow it considering it as “people’s will”? Those who argue today that the referendum in question will pave the way for the emancipation of the poor Kurdish, Arab or Turkmen people in Iraq are telling lies. No, that will not happen so, but new conflicts will emerge, leading the poor peoples to clash each other.

A similar situation exists in Spain at the moment. A referendum will take place for Catalonia’s independence.

The situation is very different in Spain. Catalonia is a very rich and developed region. There is also no ethnic pressure in its usual forms. Moreover, the Catalans do not like the rest of Spain. Barcelona regards Madrid as the countryside. Now they want to build their own state. An underlying selfish motivation is re-generated today mainly by the aim of not transferring resources to the rest of Spain. Many countries have similar regional inequalities, and if every region acts only with the principle of self-interests, humanity will suffer from great pains and new conflicts will emerge. Suppose that a country’s water resources are located in a certain region, and that country says, “Water is mine,” or industrial or energy resources. They could not resolve this problem. Capitalism is such a social system that fosters and legitimates selfishness. It does not pay attention to social interests. Catalonia’s independence has nothing to contribute to humanity, no matter how they decorate it. That does not stand for legitimating the present order in Spain. The people should unite and shift this infamous order.

We suppose that the Communist Party of Turkey (TKP) is against the referendum on the Kurdish state?

Would the opposite be possible? We are against both Barzani and the independence of a "Barzanistan." We are against Turkey’s military mobilisation as well. To answer how to prevent it: only a unitary policy is possible; working peoples will unite against imperialism, exploitation and reactionary forces. Those who do not tend to agree with this option will get drowned in the midst of nationalisms and infamous market economy.