TKP responds to strike ban: Government of bosses in charge!

Communist Party of Turkey responded to the AKP government banning metal workers’ strike commencing February 2: "The country is under threat due to the profit greed of bosses who can risk everything. Metal workers will see this threat and lay claim to both their right to strike and the homeland" 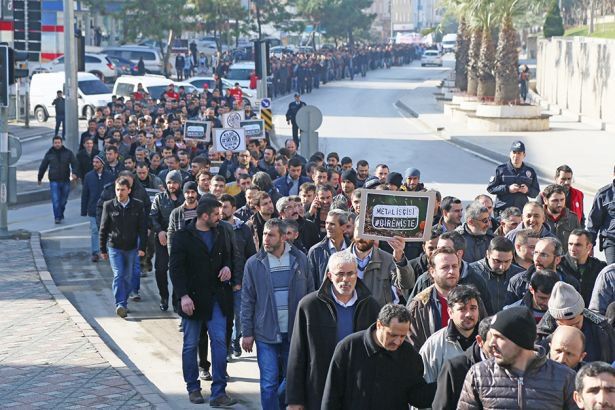 Communist Party of Turkey (TKP) has responded to the AKP government banning the strike of metal workers commencing on February 2, one week before the start of the strike.

The TKP drew attention to the close relation between the AKP government and the capitalist class, remarking "Thus, the government has fulfilled the instruction of the bosses once again. Now the metal bosses who think that they have eliminated a risk of the strike will continue imposing on workers the wages below the poverty line and flexible working. The government tells the workers whose right to strike has been revoked to 'accept whatever the bosses give.'"

"This is not the first ban. The AKP has announced 13 strike banning decisions since the day it came into power. With these decisions, striking right of 62 thousand workers was seized. 130 thousand more workers have been added to this number with the latest ban," read the TKP statement and continued underlying the use of strike bans as a capitalist oppression: "We know that strike bans are a tool of oppression over workers which the capitalist system can never abandon. Not only the AKP but every boss government that has ruled the country to date didn’t abstain from banning strikes."

The TKP also emphasised the "national security" narrative of the government in strike bans: "And the excuse for strike bans has always been 'national security.' The current government, too, showed the same reason when banning the strike of metal workers. Now the capitalist organisations and company unions whose primary mission is to keep workers under control will join in this choir. They will start a demagogy that 'national security comes first' with one voice."